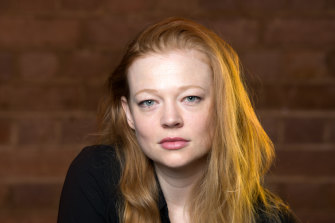 Sarah Snook is getting the recognition she deserves.Credit:Janie Barrett

Hoping to see you again

How good it is to have Sarah Snook doing so well in the US TV series Succession. Her acting skills here at home were excellent, especially in the ABC's The Secret River and The Beautiful Lie. Anna in The Beautiful Lie was her role of a lifetime, although not mentioned by Craig Mathieson's cover story? We can hope to see her again in another Australian TV series, or perhaps in a repeat or sequel to The Beautiful Lie or Secret River. John O'Connor, Arthurs Creek

Sarah Snook, at last the recognition she so rightly deserves. Brilliant in The Dressmaker, The Secret River and more. Even her name is delightful, though not as sweet as Honeysuckle Weeks of Foyle's War. Myra Fisher, Brighton East

Rove got the formula wrong

Saturday Night Rove is an utter disappointment. I would prefer something more like Hey, Hey, It's Saturday! Aunty Donna was pathetic, the three side-kicks offered nothing really funny except Justin. How about live music, international guests, houseband, slapstick and funnier segments and sketches? Rove isn't taking advantage of the rare chance to offer a new Saturday night variety show. Change the format, otherwise six episodes will be it. Andy Finch, Essendon

I was addicted to the original SeaChange and looked forward to its return. It hasn't disappointed, I enjoy the talented actors and the clever storylines but it doesn't work on a commercial station.

I enjoy the emotional ride the actors take us on, but I find the frequent ad breaks ruin the ambience. What a pity Aunty didn't commission it. Robin Jensen, Castlemaine

Bring back the hard rock

Just wanted to write in again this year and remind the showrunners for The Set that hard and heavy music still exists in Australia and isn't really difficult to find. They seem to have forgotten about it this series … again. Here's hoping for next year. Alex Lewis, Bendigo

Quiz with no master

The low standard of knowledge exhibited on Mastermind makes it frustrating viewing . Either there is a lack of interest in competing or the preliminary vetting needs reviewing, plus some of the general knowledge questions are ridiculous. The Chase has excellent and much fairer questions by comparison. Susie Holt, South Yarra

The problems with Mastermind are its dungeon-like setting and the two minutes allowed for each rigid and seemingly terrified contestant to answer questions on their special topic – after a dogged Jennifer Byrne has taken up 115 seconds relaying the questions. Not only does the contestant have to think of the answer, they also have to struggle with "What did she say"? Margaret Skeen, Point Lonsdale

Sales has lost her edge

7.30 with Leigh Sales is so trivial that I have stopped watching. Where is the 30 minutes of political analysis and hardy interviews of politicians we were used to? Leela St Albon, Toorak