“Everything Has Changed” is the title of Grey’s Anatomy‘s Season 19 premiere, which aired tonight. Yet, a lot of it also felt very familiar. In a throwback to Grey’s Anatomy‘s pilot, the season opener, set six months after the Season 18 finale, chronicled the first day of Grey Sloan’s new interns, played by Harry Shum Jr., Adelaide Kane, Alexis Floyd, Niko Terho and Midori Francis, just like Episode 101 did with Meredith and her fellow wide-eyed rookie interns.

In another likely nod to the Grey’s Anatomy pilot — which famously started with Meredith having a one-night stand with Patrick Dempsey’s Derek — one of the new interns, Jules (Kane), also accidentally had slept with an attending, Link, on the eve of her starting the program. The revelation sent Link on a wild HR goose chase, with Meredith deadpanning, “I’m in no position to judge you on this. I do recommend that you stay away from elevators,” a reference to one of the Grey’s early-years hallmarks, its signature elevator scenes. 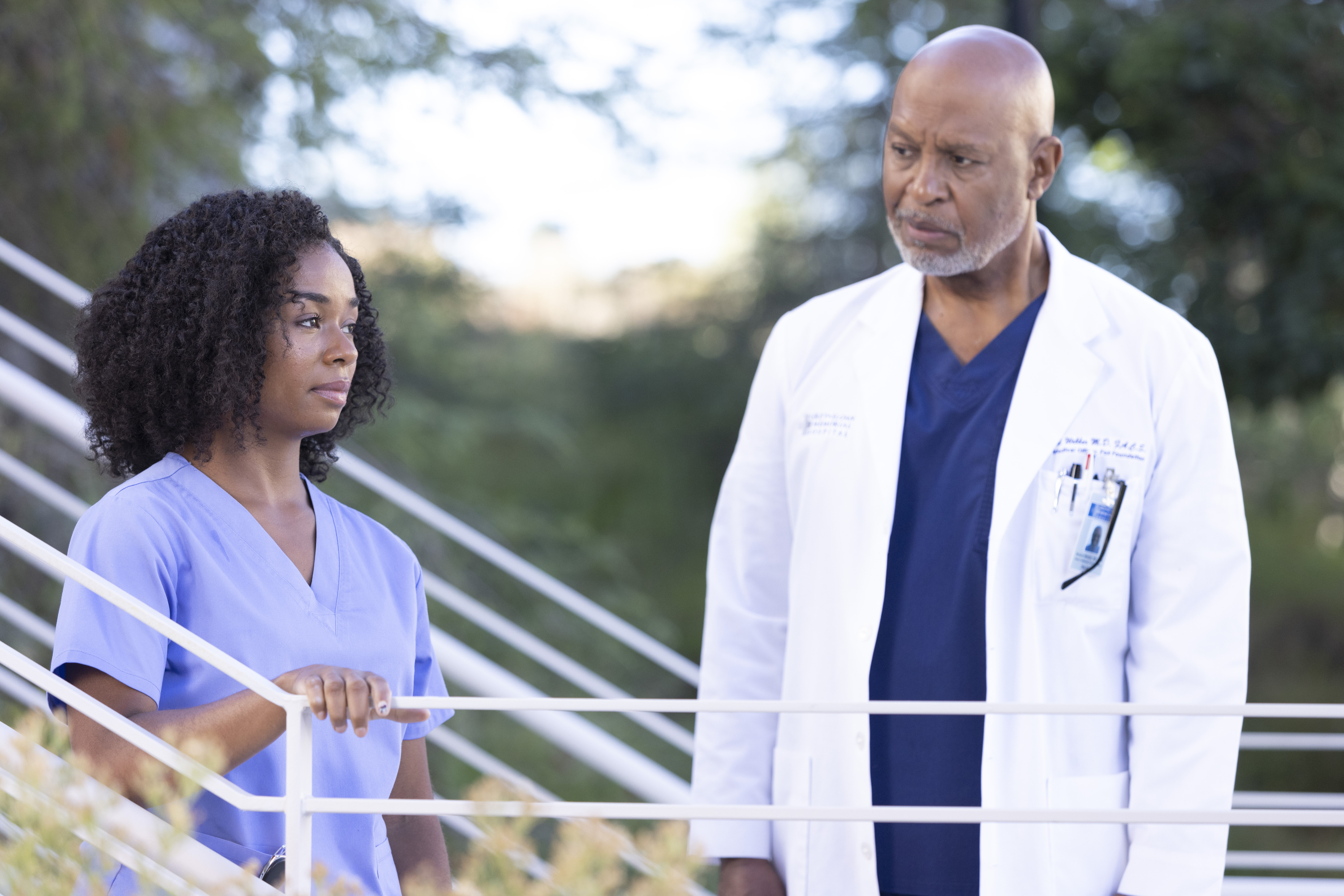 We learned a lot about the new interns who were front and center in the premiere, as their personalities and back stories started to emerge. Floyd’s Simone Griffith, who showed a lot of resourcefulness and quick thinking, shared with Dr. Webber that her mother died giving birth to her in this very hospital. Shum’s Benson Kwan was calculating and opportunistic, ready to cross a line in order to get what he wants, including making up a brother with a tragic story. Francis’ Mika Yasuda, whose inappropriate organ donor quip got her in hot water, redeemed herself with her compassion.

The biggest surprise came from Terho’s Lucas Adams. Seemingly the weakest link in a group of rejects from other surgical intern programs with non-remarkable academic achievements, he picked up a fireable offense on his very fist day when he told the wrong parent that their child was brain dead. It was later revealed, in a conversation between Meredith and Amelia, that Lucas is a Shepherd, and was Derek’s favorite nephew.

With the new characters getting most of the attention, we got sporadic updates on Grey’s returning favorites, most notably Meredith who guided the interns in her role as interim chief of surgery. She reunited with Nick after their wrenching falling-out in the Season 18 finale and, by the end of the premiere, she offered him a job as residency director. Also at the end of the episode, Owen and Teddy returned, his legal problems behind him and both ready to resume their surgical duties, with Owen requiring supervision for six months.

Richard also was back after traveling abroad, while Bailey remained off-duty after quitting in the Season 18 finale; with Pompeo slated for about seven episodes this fall and then a leave to do a Hulu limited series before returning for the Season 19 finale, Meredith may soon vacate the interim chief position for Bailey to retake it.

Meanwhile, we found out that, following the shutdown of Grey Sloan’s teaching program, Levi switched to OB/GYN but he didn’t love it and, in the premiere, he asked — and was swiftly approved — to become chief surgical resident.

In an interview with Deadline, Grey’s Anatomy showrunner Krista Vernoff, who wrote the premiere, talks about the infusion of new characters and what it means for the future of the show, what is next for Meredith and Nick, will any other Season 18 residents join Levi to fill a gaping hole at the hospital, why is the show adding another Shepherd and could we see Dempsey’s Derek in Lucas flashbacks.

She also addresses Pompeo’s future on the show and speculation that Grey’s could be bidding farewell to Meredith in the Season 19 finale as well as Jo’s remark that “the female body has become war zone in this country,” revealing how Grey’s Anatomy will deal with the overturn of Roe v. Wade this season.

DEADLINE: The premiere feels a little bit like a backdoor pilot. Are you looking to spin it off into something new or is it a Grey’s refresh, shifting to new characters with Ellen Pompeo not being in this season as much?

KRISTA VERNOFF: It’s interesting you call it a backdoor pilot. We certainly treated it like a pilot in the casting, in that we took a lot of time and care finding these five actors and fleshing out these five characters. But our hope is that we’re refreshing Grey’s Anatomy, so that we can return to the roots of teaching and learning and what it is to be a surgical intern. The life-and-death stakes of the early years of the show; every medical case had intense stakes because these doctors were new at this. And so the hope is that we’re just adding juice and yes, potentially adding years, but I wouldn’t call it any kind of a spinoff. It’s still Grey’s Anatomy.

DEADLINE: There’s a big focus on the incoming cast in the premiere. Will there be more of a balance going forward? How much are we going to see of our favorites?

VERNOFF: We are going to see our favorites, we’re working hard to balance it. It’s a big task and for sure, with this many series regulars, there’s less story to go around for everybody, but we’re doing our best to maximize the benefit of everyone we’ve got.

DEADLINE: What can you say about the big question, is this going to be Ellen’s final season?

VERNOFF: I don’t have an answer to that, that’s always up to Ellen. She’s got some new projects on the horizon that she’s really excited about but Grey’s Anatomy is is her heart, she keeps saying it is her heart, so we’ll see.

DEADLINE: So there are no plans for the finale to be a farewell episode for Meredith?

VERNOFF: The finale of this season? No.

DEADLINE: Talk about the decision to bring another Shepherd into the fold with the new intern, Lucas. Does that open the door to potential flashbacks with Patrick Dempsey since Derek and Lucas were close?

VERNOFF: The decision to bring another Shepherd into the fold, it was an early idea as we looked at who this new class was going to be. We wanted to wink at the roots of the show without trying to reinvent any of those original characters, and the fun of having a Shepherd who we meet when he’s an intern felt like, money. We only knew Derek when he was a surgical attending who was already vying for chief of surgery. But to get to know one of the Shepherds when he’s just starting out felt like it gave us a wink at the early characters or our connection to the early characters without retreading territory.

DEADLINE: So does that mean that there’s no possibility of Patrick coming back in a flashback?

DEADLINE: When Deadline interviewed Patrick at D23 last month, he indicated he was open to coming back, and said it was up to the creators.

VERNOFF: I’ll say this. There have been no conversations about that at this point. But never say never. 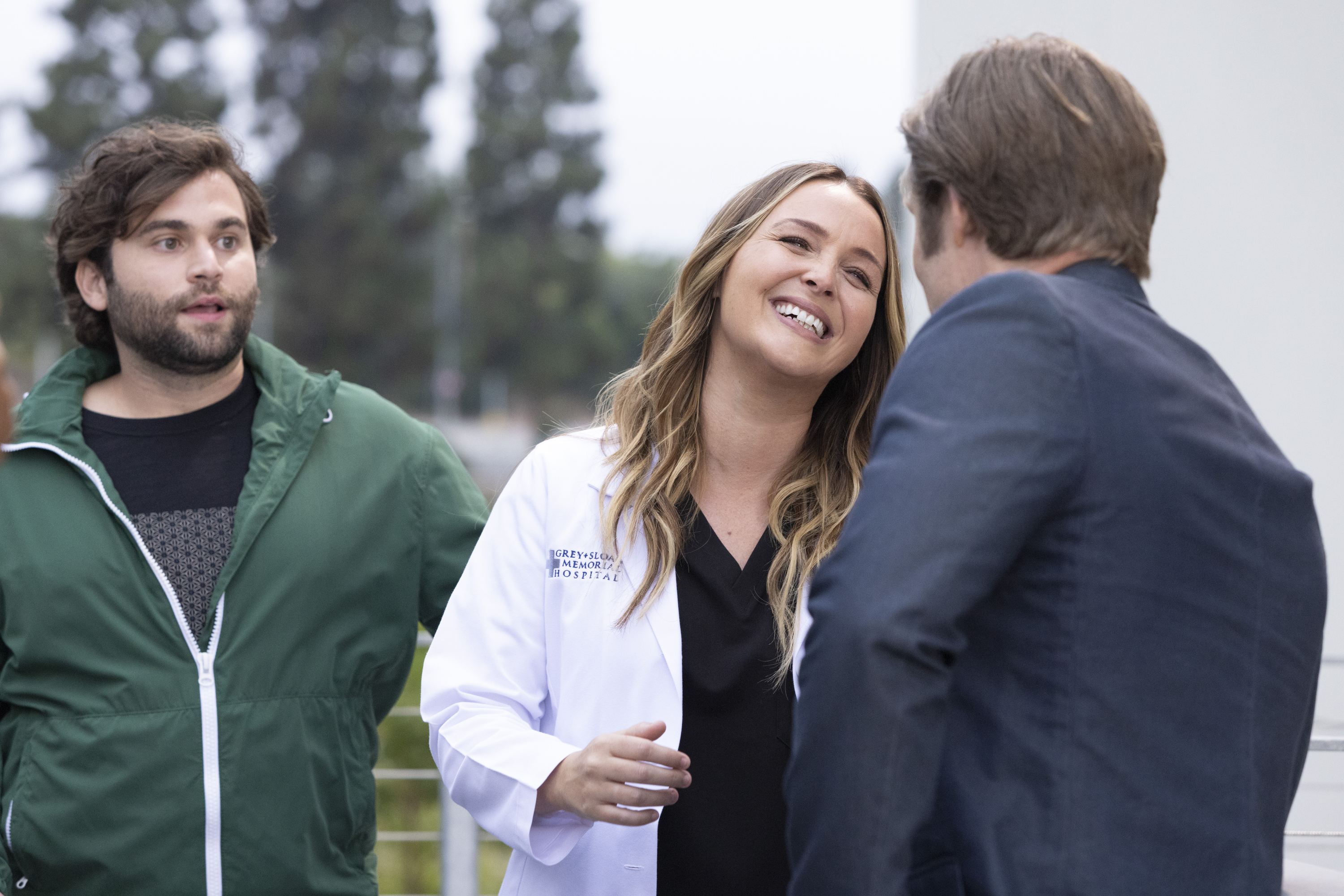 DEADLINE: Besides Levi, is there any possibility for any Season 18 residents to come back?

VERNOFF: There’s one and that is Taryn, you’re going to learn the fate of Taryn Helm. And there’s going to be a question as to whether or not she could come back to the program.

DEADLINE: In the premiere, you play a little bit with Meredith and Nick. Is their relationship back on? He has an enticing job offer from Meredith to mull.

VERNOFF: Yeah, he has an enticing job offer, and the question of what might become of them, it feels like they are two people who really fell in love and then hurt each other. Can we bring them back from that is the question, and the way that we had them break off abruptly and painfully at the end of last season, as Meredith collapsed into an older version of herself, allows us a big will-they-won’t-they for this season.

DEADLINE: Fans are certainly rooting for them to get together. But with Ellen not being in as many episodes, the worry is as to how many episodes we can expect to see him in or is he going to exit this season?

DEADLINE: Yes to which part?

VERNOFF: All of it. We want people to wonder and tune in to see what’s going to happen with that.

DEADLINE: There’s a line in the premiere that the female body has become a war zone in this country. Will there be a Roe v Wade storyline on the show this season?

DEADLINE: So is that an over-arching theme for the season or just something smaller?

Rosy Cordero contributed to this report.