Helen Skelton admits Strictly has been rollercoaster of emotions 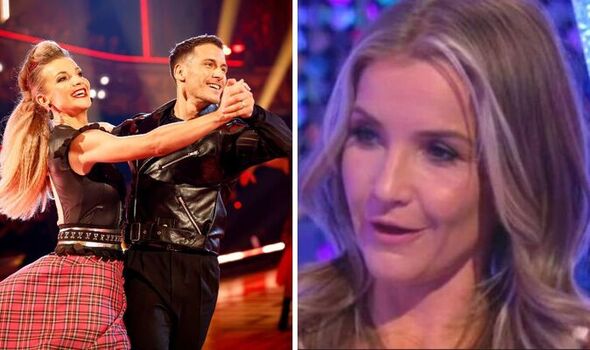 Strictly: Helen Skelton discusses the support of her parents

The Countryfile star, 39, joined the popular BBC show after a difficult period in which she and her husband Richie Myler split up. Partnered with Gorka Márquez, Helen opened up during last week’s show about how Strictly Come Dancing has transformed her into “a different person” before the presenter detailed this week the impact the competition has had on her.

A VT shown on Strictly ahead of Helen and Gorka’s performance saw her getting emotional as she explained to Gorka how she has faced a tough few months.

The mum-of-three during an emotional told her dance partner: “I definitely am a different person from when we started and for me, what has been…”

Helen trailed off as she broke down in tears while Gorka comforted her.

She continued: “I think even you say I’m a different person from day one, right?”

Talking about her dad, Richard, she continued: “He just looked at me and said ‘You seem like you again’ and I’m certainly a different person than when we started.”

Joining former Strictly professional Janette Manrara on spin-off series, It Takes Two, Helen again reflected on what being on the series has meant to her.

Helen remarked: “I came into this and I underestimated it, because I thought, ‘It’s dancing and nice dresses and interesting people.’

“But it’s weird, it’s so much more than that. It makes you ask questions of yourself that you don’t ask.

“I’m a 39-year-old woman with three kids and you do your job and your relationships and your house and your career and all of that – and you don’t really just challenge yourself and find joy in yourself.

“So it’s been a rollercoaster of emotions that I didn’t expect.”

Responding, Janette commented: “This is not just a dance show everybody.”

Earlier this year, Helen announced her and her husband had separated.

In a statement, she confirmed at the time: “Very sad to say that Richie and I are no longer a couple. He has left the family home.

“We will be doing our best to co-parent our small children.”

Shortly after their split was announced, it was confirmed Richie had started dating a mystery woman.

It was later revealed she was Stephanie Thirkill, 32, the daughter of the President of Leeds Rhinos, Andrew Thirkill.

He took to Instagram to share a picture of them on their holiday to Cornwall, with Stephanie calling it the “best weekend” in response.

In October, it was reported Richie and Stephanie are now expecting their first child together.

Strictly Come Dancing’s quarter-final will air on Friday rather than Saturday this week due to the World Cup coverage on the BBC.

The series will see the remaining six couples continuing to battle it out in an effort to make it to the final.

Strictly Come Dancing continues on Friday at 8pm on BBC One.