Hobbs & Shaw: beefy, bald and back to save the world

Hollywood used to get flak for aiming its product at a core audience of 12-year-olds. If only this were the case today when the average blockbuster seems made for an ideal viewer aged around six.

Even by current standards, there’s something tiresomely coy and juvenile about Hobbs & Shaw, an action thrill-ride which poses the question of just how many bad guys two grown men have to punch, shoot, fling to the ground and otherwise incapacitate before they can pluck up the courage to admit they like each other. 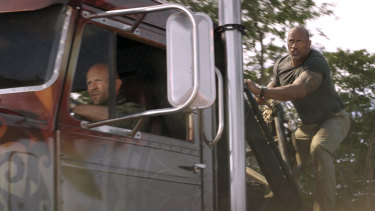 Jason Statham as Deckard Shaw (driving) and Dwayne Johnson as Luke Hobbs in the latest instalment of Fast & Furious.Credit:Universal

The men in question are US State Department agent Luke Hobbs (Dwayne Johnson) and reformed British mercenary Deckard Shaw (Jason Statham). Having butted heads in a couple of the Fast and the Furious movies, the pair are unwillingly reunited as they race to stop a deadly virus being unleashed on the planet by a genetically-enhanced eco-terrorist named Brixton (Idris Elba).

Naturally, these two are polar opposites in various regards. Hobbs is a jeans and singlet type, Shaw favours blazers and turtlenecks. Hobbs describes himself as an "ice-cold can of whoop-ass", Shaw in his own words is a "champagne problem". Hobbs is a nice fella if you don’t get in his way, Shaw is a bit grumpy.

At the same time, they’re versions of the same character: two beefy baldies, each with his cock-of-the-walk strut and conviction that he and he alone is fitted to save the world.

You might equally say they don’t qualify as characters at all, there being no pretence that their evolution from foes to pals is anything but genre-mandated ritual. Still, the action regularly grinds to a halt so they can trade elaborate putdowns, which give every sign of having been crafted by writers whose practical experience of brawling has occurred mostly on Twitter.

The total effect isn’t so far from the spoofing of machismo which is a speciality of Will Ferrell – as director David Leitch underlines via the bemused reactions of Vanessa Kirby as Shaw’s sister Hattie, a slinky secret agent who is also a voice of wry British common sense.

Moreover, the plot demonstrates that, for all their big talk, the heroes stand no chance of success all on their own. Hobbs must reconnect with his estranged family back in Samoa, while Shaw has stayed in touch all along with his roots, represented by Helen Mirren as his crooked but loving mum (a role she previously played in The Fate of the Furious, perhaps the first instance of screen chemistry with a woman in Statham’s career).

Still, the joke can only be carried so far. For the leading men, everything appears to be business as usual – which hardly needs saying in the case of Statham, a cook who knows just one dish. 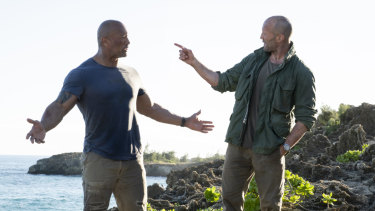 Johnson is a different matter. I hate to say a word against an actor so widely and rightly beloved, whose total commitment to cheese is normally the best index of his professionalism. But his comfort with himself is starting to look a lot like complacency, to the point where he risks losing his status as the only adult in the room.

His true rival, of course, isn’t Statham but Elba, whose character is the film’s most ridiculous – he refers to himself as "black Superman" and takes orders from a disembodied voice sounding like Dr Claw from Inspector Gadget – but who nonetheless retains enough force to leave you wondering why on earth he isn’t the star.

It might be argued that plot and character aren’t that important in a film where pure action is the goal. But Leitch is a long way from his strenuously stylish spy thriller Atomic Blonde –style in an overt sense being what he seems at pains to avoid.

Admittedly he still has a few tricks up his sleeve. His high-speed chase sequences owe something to George Miller’s pace-setting Mad Max: Fury Road, aiming for the thrill of rapid cutting with no loss of clarity.

Miller’s style, though, is deceptive: the excitement isn’t just on the surface but depends on ensuring each shot serves the needs of the larger story. This, in turn, is possible only if you have a story worth telling: casting Statham as the suave one in a mismatched team of frenemies probably wasn’t a good start.