“The thing that was exciting about telling a story in 1993, while being in 2021, was the prism that we get to look at our world from,” showrunner Elizabeth Klaviter says 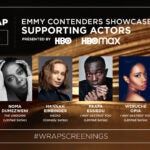 “One of the most important things about 1993 was there was no HR and so much of the language that we have now just simply didn’t exist. We wanted to load Clarice up with as many obstacles as possible. We really wanted the FBI, which at that time was 90% male, to feel like an old boys club,” added Lumet.

Tyler, who plays Ardelia Mapp, agreed with Lumet: “There was no vocabulary around HR and how to talk about these things back in the ’90s, but gratefully we have more of a launching pad, and so now we can talk about them a bit more. It’s been lovely just to actually live those conversations on screen. I think it’s important that people get to witness that.”

Rebecca Breeds, who had the task of following up Jodie Foster’s performance as Clarice Starling, championed the friendship between Clarice and Ardelia.

“That’s one of my favorite things. These women are faced with horrific, horrific things in their day jobs. Not only that, they have to take on the burden of racism and sexism in the workplace, plus all their trauma from their lives. Within the safety of their friendship, one of the ways they can deal with that is they can joke,” she said.

Check out more in the video at the top of this post. And check back with TheWrap daily for more from our Emmy Contenders series.