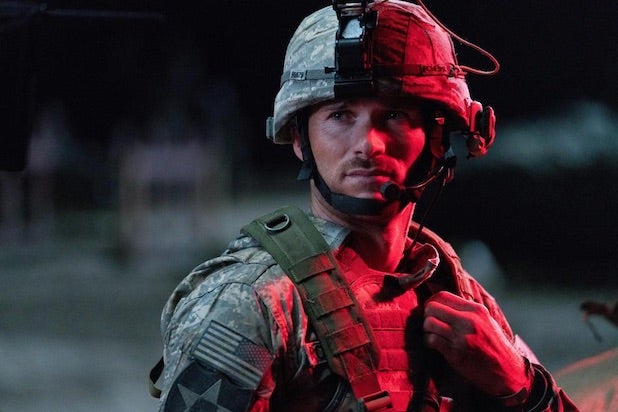 Scott Eastwood in The Outpost / Millennium

Rod Lurie’s “The Outpost” is set at a military camp in Afghanistan completely surrounded by steep mountains. In 2009, the bowl-shaped natural coliseum was the stage for a deadly Taliban attack. Based on a book by CNN’s Jake Tapper, the film subsumes the audience into the soldiers’ terrifying experience, especially during the elongated battle sequence which takes up much of the movie’s second half. Camp Custer (the outpost’s morbid nickname) was thought to be an essential spot in the U.S.’s counterinsurgency strategy, but its vulnerability was evident just from one look.

Cinematographer Lorenzo Senatore was tasked with establishing the film’s location, giving us a guidemap to the camp’s small network of tents and vehicles, and then immersing us in the unfolding battle. Senatore’s credits as director of photography include “Megan Leavey” and 2019’s “Hellboy” (and camerawork on “Wonder Woman,” “Beauty and the Beast” and “Spectre”). He’s a master of clean lensing and visual control, which makes his work on “The Outpost” even more impressive, as he utilized disorientation and a dark palate to give the audience an immersive view of war’s hell.

Senatore talked to TheWrap from his home in Bulgaria. “The Outpost” is available now on Netflix.

The location is specific and very crucial to the storytelling. Where was the film shot?
We shot in Bulgaria, in a little quarry that had been excavated of all its big rocks. It was about an hour’s drive from Sofia, the capital city. Finding that was the first big challenge. The actual outpost was completely surrounded by mountains. We had half of the location, in actuality, because we had mountains on one half and the other half was completely open.

But there is a single-take shot early in the movie which pans the circumference of the mountains around the outpost.
Yes, as you can see, we didn’t limit the camera movements at all. We just ended up doing some CGI replacement. And the lucky part was that the side without the mountains was also the side that was front-lit for most of the day. So that was the side that I would generally never shoot, even if it was available.

Were you intimidated by shooting in just one location?
I wasn’t threatened by the single location thing. I was hopeful that since the location was big, there would be a lot of opportunities to follow people in different environments, interiors and exteriors. In my first conversation with Rod [Lurie], he explained to me he wanted to do a lot of long takes and long sequences, almost real-time.

And everything that you shot was on location? Or did you go to sound stages for the scenes inside the base?
We stayed there. We were there for two months. The entire camp was built exactly to scale, based on the real outpost in Afghanistan, and all the interiors as well. There are a few shots in the film where the camera moves from interior to exterior or vice versa. You can do that using a green screen to connect to the two, but we didn’t have to do that. Everything was real.

Actors talk about the benefit of realism when they’re working on the set. Does that apply to you as a cinematographer as well?
Oh yeah. The broad approach from the beginning was realism, so I said to my crew, “Let’s all adapt our technique. Let’s see all the advantages in this.” What bothers me sometimes about big Hollywood movies is that you can so often feel that the camera is in a position which is completely unnatural.

What’s an example of that?
Like when they split a vehicle in half. On a Hollywood shoot, you would build half a Humvee, so that the camera and crew can easily film the actors inside of it. But I think that audience immediately feels that. So when I started breaking down this script scene by scene, I saw that there were nearly 25 script pages set inside a Humvee. Sometimes with two guys or sometimes with five guys.

And you saw the potential for filming it more realistically?
Yes. But it was complicated. A Humvee is obviously a decent-sized vehicle, though when you stick five people inside it, it can suddenly feel cramped and small. One of the things I like to use is a wide lens very close to the actors. I’ve shot a lot of thrillers and horror movies and I love them as a fan and as a filmmaker and this tight closeup is something very common in those genres, so I knew we could take advantage of it in the Humvee scenes.

You didn’t shoot the movie in anamorphic wide-screen though?
In the end, we went for a classic 1.85:1 format. It all came down to what felt more real. We could have shot it in CinemaScope or widescreen, but we didn’t want it to look cinematic, as in the polished beauty sense. We also went with spherical vintage lenses. We wanted the camera head to be as lightweight and moveable as possible, so that we could move the camera inside the vehicle and get all the action we need. They are very small and light and we needed to move fast.

How light was the camera head?
We got it down to two or two and a half kilos [about five pounds]. We used an ARRI Alexa Mini and we stripped it down, so that all the camera accessories, the battery and all the electronics, were tethered inside a backpack. The cameraman had just the lens and a small monitor on top, so he could see what he was framing.

Do you see a lot of potential in cinematography thanks to how lightweight cameras have become?
Well, in a sense. But I was influenced a lot on this film by things I saw many years ago in “Das Boot,” the Wolfgang Petersen submarine film. It was a huge inspiration for me as a DP. I was obsessed with knowing how they got the camera to go through the really small bulkhead doors in a submarine. They had built the submarine on a soundstage but they had built it with all the real dimensions. You can cheat all you want in movies, but they didn’t do it. So it was the camera operator who was running through these tiny doors, holding the camera by hand, not on the shoulder, kind of like a hybrid between handheld and Steadicam. It worked fantastically.

The cinematographer’s job is to light things, but there are a number of scenes in “The Outpost” that take place in near darkness.
It’s a natural instinct, for sure, to light scenes properly. If you’ve seen my previous work, you always have a clear sense of what’s going on, so I had to force myself a bit here. Rod was really pushing me for the darkness. We had a lot of real veterans on the location and even in the movie. They were all telling us that at night, they wouldn’t even start fires or shine lights. They would not go outside the barracks if there was a full moon. If it was total darkness, they only had little glow lights around their neck. We wanted to preserve that for the film, but it’s very challenging. Anyone who looks through their iPhone camera at night can understand that. So I did a lot of tests on the night lighting. And then after we finished shooting the night scenes, I still dropped the exposure down a bit in post-production.

The battle sequence is really 45 minutes of relentless combat. It’s not quite done in real time but it’s very visually consistent. How did you manage that?
It was an all-location shoot, obviously. Unfortunately, we had an accident in pre-production when one of the actors (Scott Eastwood) broke his ankle badly. But it meant that we got extra time to spend as production shifted back a bit. I did a lot of brainstorming – first splitting up the whole big puzzle of the battle, then assigning each piece to the best part of a day to shoot, and then reassembling it all. So one morning we would shoot the first part of a shot. But we’d save the second part of the same shot for the next morning, so we would have consistent light.

Were those long shooting days?
Well, we were shooting without lunch breaks. That’s actually a big plus for us in the camera department. You keep the momentum going. When everybody takes a break for an hour, by the time you get the machine going again, it’s already late afternoon and the lighting is completely different. It meant a lot that we were able to complete a sequence with the same look from beginning to end.

Also some of the shots in the ambush sequence are lengthy.
That was the other big advantage. We were shooting long shots and when you are doing that, it’s a big plus for continuity. You definitely dedicate more time in planning and rehearsing and choreographing the shot. But then when you start shooting, you get the result in this little window, after two of three takes. There was a period during the final sequence where we were shooting only two shots a day.

What’s your philosophy about long takes? Do you love the challenge or is it too much trouble?
It makes the job more complicated but I love it. My background is in Steadicam and long takes are part of the magic of Steadicam. Also, when I began working, I was doing a lot of longer Steadicam shots and that’s how I built my career. I would just be called in for a day, because it was extremely expensive 20 years ago to have a Steadicam on set all the time.

What’s your favorite long shot in movies?
I love Brian De Palma and the way he does them. Spielberg is a master as well. There is one in “Carlito’s Way,” Al Pacino is hiding from some guys in Grand Central Station in New York. That was done with Steadicam by a camera operator named Larry McConkey, who’s one of the legends in the movie business.

Do you still strap on the Steadicam?
From time to time. I didn’t on this movie because it was very physically demanding. I didn’t want the physicality of the operating to interfere with the goal we were going for. I had an incredible operator from Canada called Sasha Proctor, who was in much better physical shape than I was. I did it for 20 years, so I’ve got the scars on my back.