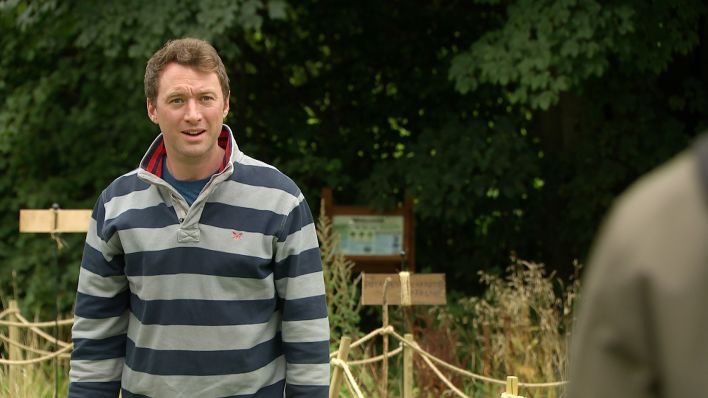 Emmerdale is continuing to raise climate change awareness through a variety of different ways, with one of the most prominent being Liam Cavanagh’s (Jonny McPherson) local allotment.

Liam experienced months of depression and isolation in the aftermath. He was angry at the world for taking his daughter from him – unaware Meena was responsible for it all.

As things started to get a little easier for Liam, partner Leyla (Roxy Shahidi) surprised him with an allotment in the village – and he really started to thrive.

He built a greenhouse out of old bottles, made a deal with Marlon (Mark Charnock) about giving him some veg to use in the pub, connecting with the environment and being present has had a huge benefit on Liam’s mental health.

But there’s more to this allotment than just a soap storyline.

The plot is looked after by Lisa Knite and Jo Walker, who met during a gardening course at the Royal Horticultural Society.

Everything grown and harvested in the Emmerdale allotment is never wasted – it is given to a charity called St Annes, which then delivers the healthy produce to homeless people in Leeds.

‘It’s a vehicle to promote that message – both subliminally on the television programme, and directly by providing for the homeless.’

Jo added: ‘The fact we’re out sharing it with a homeless charity is just wonderful. People can see the process of growing veg on their TV screen – it’s not as easy as you’d think. It encourages people to get stuck in.

‘From a tiny seed, you can grow amazing produce.’

Last year, Liam was one of the many soap characters who took part in a special crossover to raise climate change awareness.

One of the scenes saw Liam chat to Amelia (Daisy Campbell) about his former colleague – Dylan (Will Beck) from Casualty – implementing a scheme in the ED that reminds people to use the correct recycling bins.

‘I think it’s a wonderful thing’, Jonny said at the time.

‘I was listening to something on the radio today. A lady was talking about her 17-year-old daughter and how all her friends are constantly lecturing her about disposable culture. I think she was talking about buying Christmas presents for kids these days. She said it’s impossible because they don’t want anything, because they don’t want to acquire stuff to then just dispose of it. They’re so conscientious when it comes to the environment.

‘If anything, if Emmerdale raises a bit more awareness with the demographic my age onwards, that’s a great thing as well, as well as obviously young kids.’