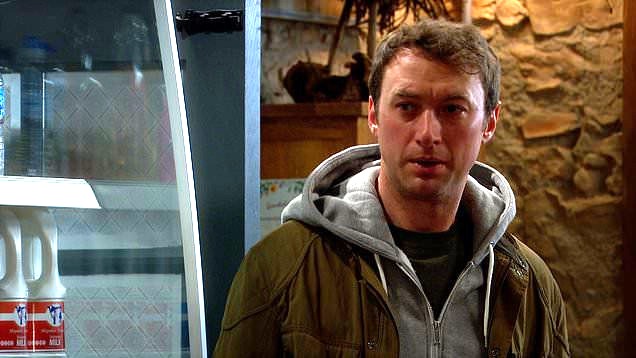 Watching Liam Cavanagh’s (Jonny McPherson) world turn upside down after losing his daughter Leanna (Mimi Slinger) in Emmerdale has moved me to tears.

First appearing back in 2014, Liam’s storylines have consisted of well, to quote Jonny McPherson from a recent Loose Women interview, they’ve consisted of Liam being ‘found in compromising positions in bushes’.

Liam’s spent the last few years involved in fairly light-hearted drama, but what that’s allowed us to do is learn that this is a man who will move heaven and earth to ensure his daughter – aka ‘the light of his life’ – is happy.

So, to take that light away, to have Leanna killed by murderous Meena (Paige Sandhu), Liam is left with one question – what’s the point?

We talk often about the power of soaps here at Metro.co.uk. Storylines are told to teach and help people, to encourage conversations, but watching the aftermath of Leanna’s death play out, I’ve learnt soap narratives can do more than just explore one topic at a time, such as grief.

I’ve connected to Liam’s journey in a way I never expected to when watching him discover his daughter had died a few weeks ago.

It’s been niggling away at me, and at first, I couldn’t work out why it had got to me so much. I’m 22, I’ve no children, I’ve never lost a family member, I don’t know what it is to have someone you love so much taken away from you. In what way do I relate to a grown man grieving for his dead daughter?

And then I realised, watching Liam have his soul torn apart, watching him drown in so many emotions he can barely function – I’ve been there.

I was depressed in 2018. I experienced a traumatic event that made me feel exactly like Liam; isolated, alone, and as though I was the only person in the whole entire world feeling those feelings.

Liam’s angry at the world. He’s at the bottom of a pit and he’s still very much falling. He’s in indescribable pain and it’s turned him into a broken soul, but that’s exactly what makes this narrative so important.

Depression turned me into someone I barely recognised. I was 20 years old; no job, no money, barely any friends, and I was cruel. I was in the middle of an ordeal that was dark and frightening and barely understood why I responded to situations in the way that I did. Watching Liam push Leyla (Roxy Shahidi) and Jacob (Joe-Warren Plant) away, seeing him so unbelievably furious at anyone who dared to support him, it made me connect with this character, it made me feel normal.

It’s important to say, Liam isn’t awful on purpose. When I was depressed, I was over-sensitive, and I was unpleasant. How dare people try to tell me how to feel better? They don’t know what I’m going through.

When I was dealing with my trauma, I was fully aware of all the terrible things I was saying, just like Liam. I knew I was saying bad things and yet I couldn’t stop it because that black cloud I was under was controlling me – just like Liam.

In a recent episode, viewers saw Liam in his car after driving away from the village.

That scene blew me away. It was unexpected, and I was completely taken aback, because I’ve been exactly where Liam was.

Liam sat in the car in tears, he was barely moving, just silently crying. When I was depressed, I was in Liam’s situation a lot. I sat in the car, consumed with sadness, totally unaware of the world and failed to notice the hours tick by.

This storyline is a special one to say the least, and it’s made me realise that we need to see more characters in soaps reacting to a traumatic event in a different, perhaps unexpected way.

Typically, a character grieving in a soap will see them scooped up by a friend or a family member, they’ll be held so tightly while they try and deal with their feelings. For Liam, we haven’t seen that.

If we’re talking specifics, the coronavirus restrictions have stopped us seeing those close-contact scenes but for once, the two-metre rule hasn’t necessarily been a bad thing because in turn, it’s created a layered, complex narrative that’s allowed myself and so many others to relate to the loneliness and utter despair Liam continues to feel.

Jonny McPherson has delivered and continues to deliver breath-taking performances throughout Liam’s journey with intense and raw emotion.

A scene a couple of weeks ago saw Cain (Jeff Hordley) support Liam after his loss. The two men hardly spoke, they just sat and drank beers. Liam was hyperventilating, he was so overwhelmed he couldn’t even say a couple of words. It takes a special, powerful actor to portray those emotions so intensely – and that’s exactly what Jonny McPherson is.

I’m not depressed anymore. In fact, in 2021, I’m the happiest I’ve been since I became mentally unwell, but that doesn’t mean I don’t think about everything I experienced.

Liam’s grief has made me reflect on my own trauma and it’s helped me understand my mental health and my emotions.

Most importantly, Liam’s storyline has helped me heal.