Gillian Wright has been nailing every single storyline as Jean Slater ever since the character’s arrival to EastEnders in 2004.

Most recently, Jean was at the centre of another powerful narrative that saw her suffer a bipolar breakdown.

She stopped taking her medication which saw her behaviour change drastically, something Stacey (Lacey Turner) immediately picked up on.

For Jean, she couldn’t see that she had fallen unwell and continued to pursue a relationship with Harvey (Ross Boatman), who loved seeing a spontaneous and wild side to Jean.

Sadly, the concluding part of the storyline saw Jean attempt to end her life by walking into the sea.

She was saved by Stacey and later taken to hospital. 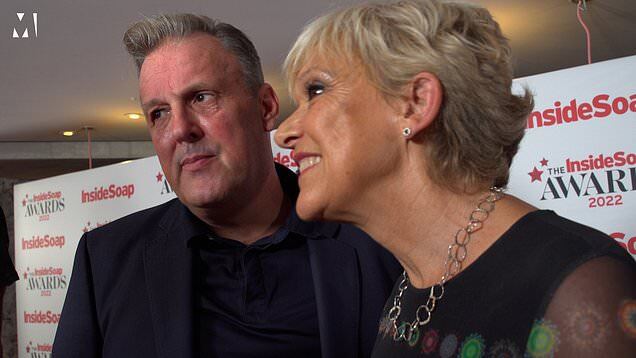 Gillian’s performance throughout Jean’s breakdown was praised heavily by fans. Many related to Jean’s experience and for the actress – who picked up the award for Best Actress at this year’s Inside Soap Awards – receiving messages from audience members who have bipolar disorder has been something incredibly important to her:

‘It really matters to me because I had to connect, it’s so important’, she told Metro.co.uk.

‘I had loads of messages with people sharing their bipolar stories and that really underpinned the work and it does make all the difference because it matters.

‘If what we have all done collectively has gone any way towards raising awareness of bipolar then I am over the moon.’

Alongside Gillian was Ross Boatman, who plays Harvey Monroe.

Teasing what’s ahead for their two characters, he said: ‘We don’t know for sure, you’ll have to keep watching and find out. We’re kept in the dark, we don’t really know ourselves.

‘We know that there’s still a connection between them and they’re really fond of each other. We’ve got some nice stuff coming up.’