James Corden has revealed Tom Cruise makes it a habit to land helicopters in people’s gardens.

Days after it was revealed the Mission Impossible star landed his chopper in a family’s field in Warwickshire, England because he was running late, Corden has shared his own similar experience with the 59-year-old.

Recalling a request he received from Cruise over the summer, The Late Late Show host shared the hilarious interaction on Tuesday’s episode.

‘This summer me and Tom Cruise were texting about meeting up in London,’ he began. ‘He sent me a text saying, “Whereabouts are you staying?” And I said, ‘”I’m staying in St. Johns Wood,” which is pretty central in London…’

Corden continued: ‘He said, “Cool, can I land my helicopter there?” And I just presumed he was joking.’

Showing off the text message exchange between himself and the Hollywood superstar, Corden added: ‘I sent back four crying emojis because who can land a helicopter in a yard? And he’s put, “Does that mean no?”‘ 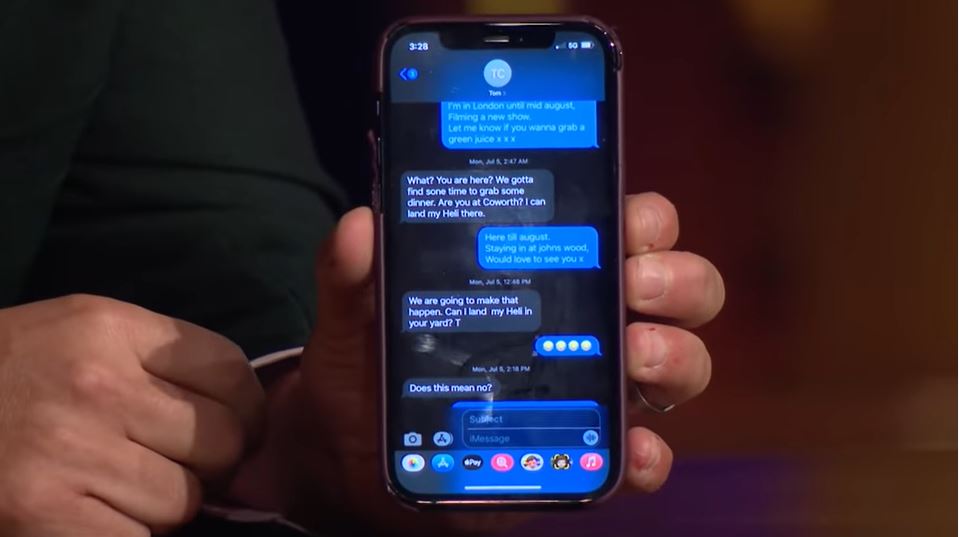 When Corden went on to explain to Cruise that he couldn’t land a helicopter in a small yard in the middle of central London, the Vanilla Sky actor replied: ‘”You’d be surprised where I can land.”‘

Corden’s story comes after Cruise, who is busy filming the next Mission: Impossible movie in the UK, found himself in a bit of a pickle when he needed to land his helicopter due to Coventry Airport closing temporarily.

Warwickshire resident Alison Webb and her partner were then called upon for their field to be used by an ‘unnamed VIP who was running late’ and desperately needed to land.

Indeed, Tom has been popping up all over the UK in recent weeks, including last weekend when he was spotted enjoying dinner at a curry house in Birmingham.