Jason Sudeikis Finally Opens About His Split From Olivia Wilde

Jason Sudeikis and Olivia Wilde were a pair that didn’t totally make sense on paper, which is one of the reasons we loved them so much. According to Us Weekly, the pair first met at a wrap party for “Saturday Night Live” in 2011. Things progressed quickly, and Sudeikis got down on one knee in 2013. The couple shares two adorable kiddos, Daisy and Otis. In 2016, Wilde opened up about the topic of marriage to Net-A-Porter, stating she and Sudeikis were “seriously connected.” “Before you have a child, marriage is the ultimate commitment and promise to one another, and then once you have a child, it’s like, ‘Oh, we’re committed and promised already,'” she told the outlet.

Wilde also raved about Sudeikis in a 2013 Marie Claire interview, just shortly after the pair met, which also happened to be on the heels of a divorce for both her and Sudeikis. “I’m so grateful for the pain and the heartbreak. It gave me the courage to leave and brought me to the great love of my life,” she shared while noting that she was just finding herself when the pair met. “He seemed to really see me, see through the bulls**t,” she gushed. “He said very few words and couldn’t keep eye contact. He was so handsome.”

Ugh, break our hearts. As we know, the pair had a long engagement, but never walked down the aisle before splitting in 2020. See what Sudeikis has to say about the breakup now.

Jason Sudeikis is still digesting his split from Olivia Wilde 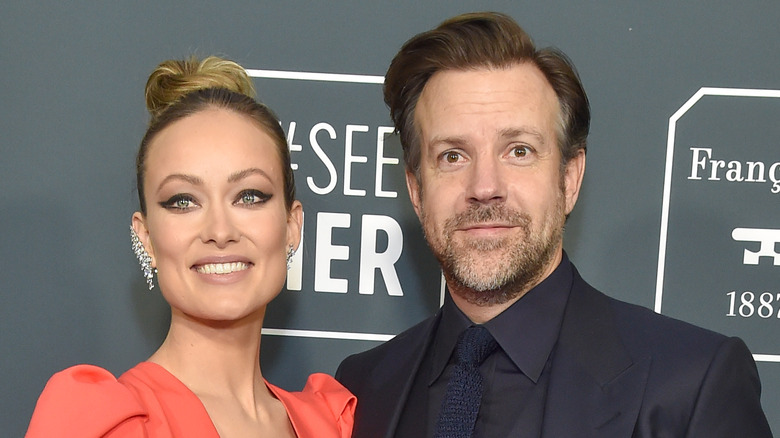 Since his split from Olivia Wilde, Jason Sudeikis has remained pretty quiet until a sit-down with GQ in mid-July. When asked, the actor shared he and Wilde split in November 2020. He was pretty honest about what went awry, and like many other relationships, he hinted he was still digesting it. “I’ll have a better understanding of why in a year,” Sudeikis responded, adding, “and an even better one in two, and an even greater one in five, and it’ll go from being, you know, a book of my life to becoming a chapter to a paragraph to a line to a word to a doodle.”

“That’s an experience that you either learn from or make excuses about. You take some responsibility for it, hold yourself accountable for what you do, but then also endeavor to learn something beyond the obvious from it,” he continued. Of course, the actor also said he and Wilde are no longer living together, which doesn’t come as much of a surprise, but still breaks our hearts into a million tiny pieces.

Post-breakup, Wilde and Sudeikis have both moved on. Wilde has been spotted with Harry Styles on several occasions after the pair met on the set of “Don’t Worry Darling.” In turn, Sudeikis moved on with Keeley Hazell, per OK! Magazine, and the two seem to be getting serious. While fans may wish Sudeikis and Wilde were still together, it sounds like they’re moving forward the best they can.