THE impact of social media trolling is clearer than ever but still some vile people seem insistent on bullying online, with Jess Glynne the latest victim.

I’ve learned she has been forced off Instagram and Twitter, deleting her accounts due to a relentless tirade of abuse which left her feeling upset and vulnerable. 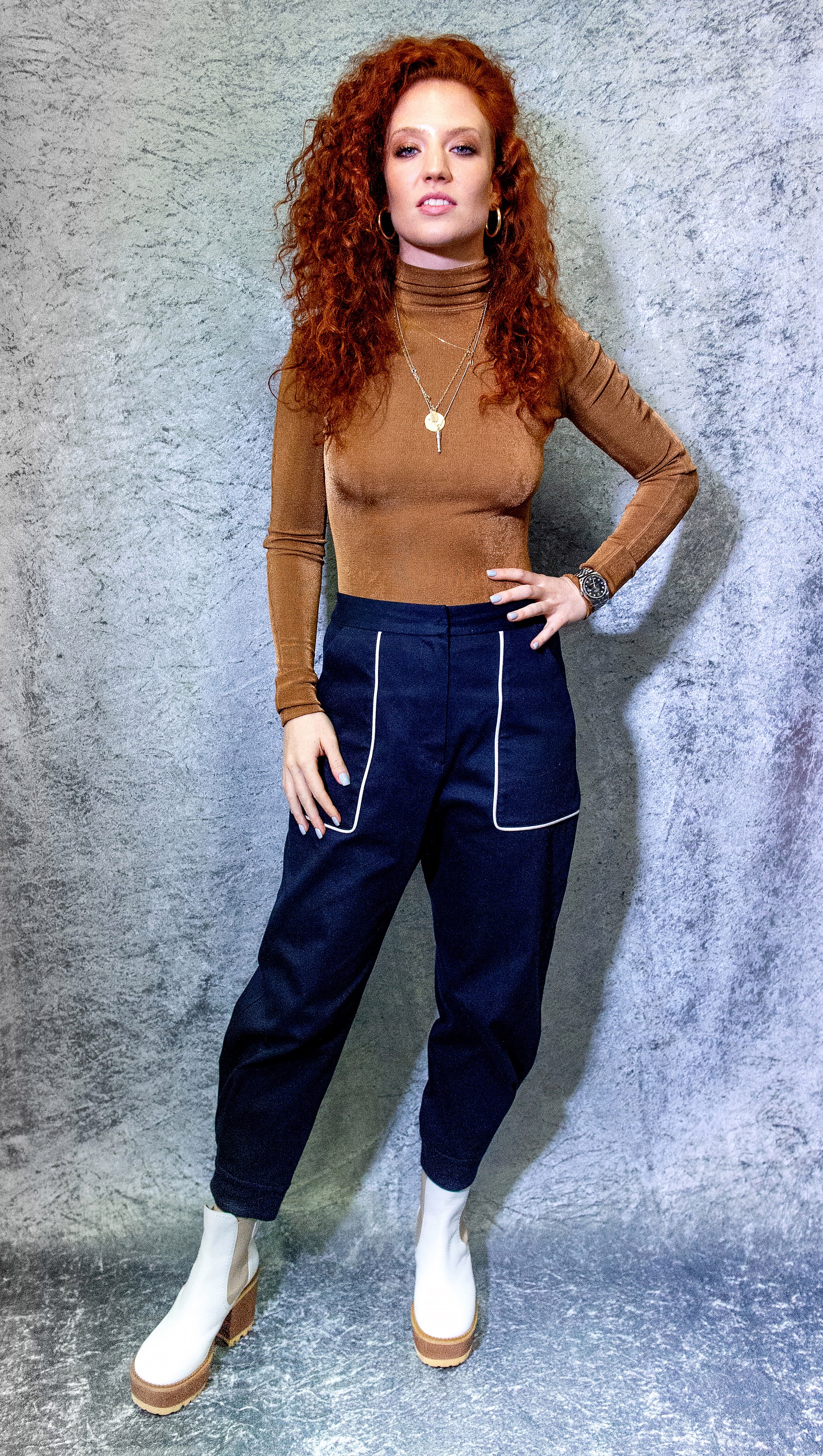 The Hold My Hand singer, who is one of the nation’s most successful chart acts with seven No1 singles, made a misjudged comment on a podcast last month, using a derogatory slur for a transgender person, and this has led to the barrage of abuse.

Horrified that she had not realised the term was offensive, she apologised over and over and promised to put in work to    edu- ­cate herself about trans issues.

But the braying cancel- culture mob seemed deter­mined to see her suffer and continued to hound her on social media with no let up for days on end.

Jess eventually decided she couldn’t put up with it any longer.

One disgusting keyboard warrior even urged her to “go die, bitch” and the appalling message can still be seen on Twitter.

A source close to the star said: “It has been a horrid few weeks for Jess.

“She feels so upset about the whole situation and really felt like the only way to escape was to delete her accounts.

“It’s sad, because she had great relationships with her fans online, but that has been ruined.

“This has been an incredibly difficult exper­ience for her, especially at a time when she has been in lockdown and unable to distract herself.

“These trolls don’t seem to realise how painful their words are and the impact the comments can have.

“She knows she is not a nasty person but is being relentlessly punished for a mistake which she apologised for.” 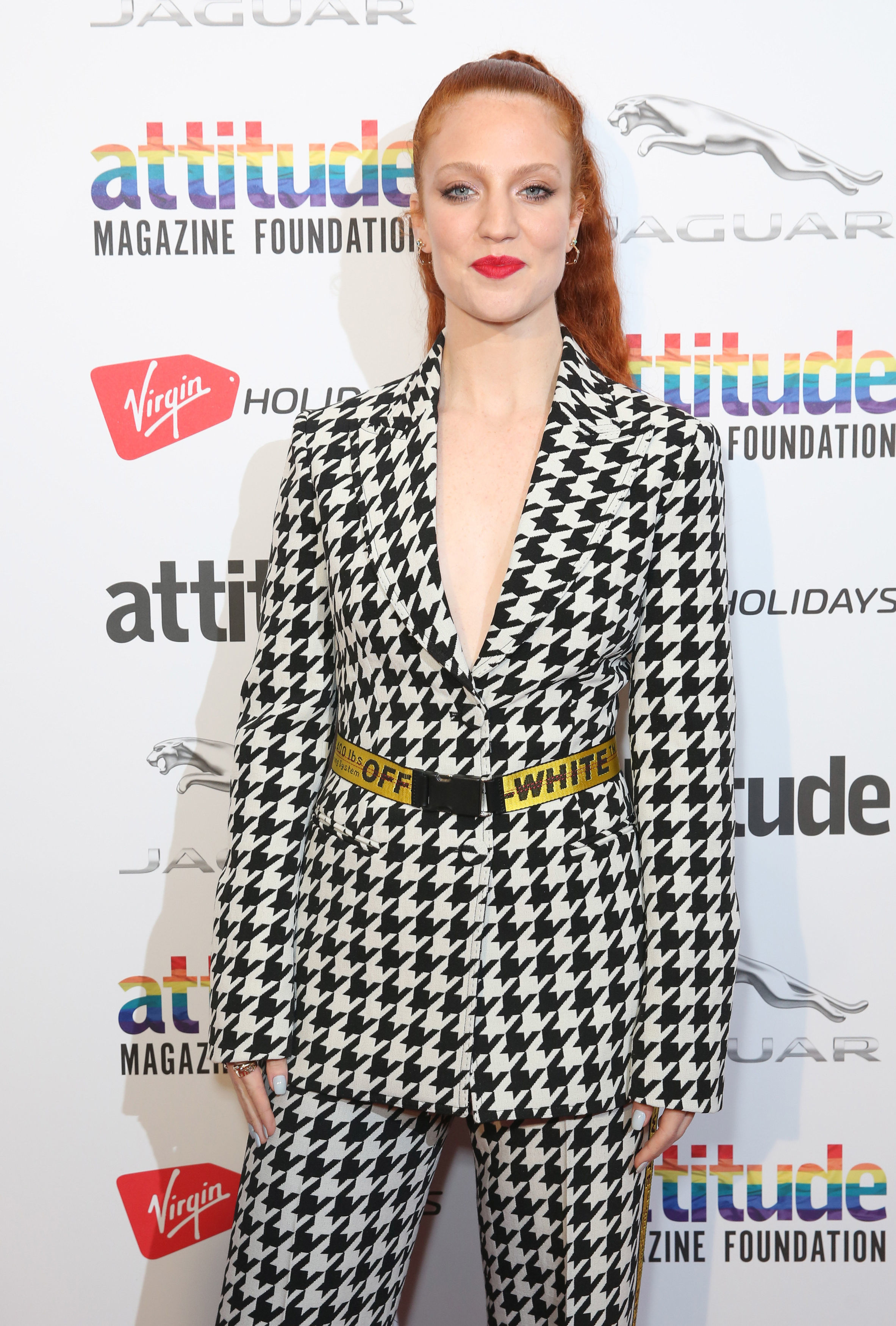 I told last week how Normal People actor Paul Mescal had also deactivated his Instagram, although the nastiness faced by Jess was far worse.

Jess has always been nothing but lovely when I’ve met her and I don’t have a bad word to say about her.

Everybody makes mistakes and Jess held her hands up, apologised and vowed to put in the work to make things right.

The fact that she now feels she can’t even use social media any more should make those trolls reflect on how they would feel.

Is this a parking Bey?

WITH a lack of red carpet events at the moment, celebrities like Beyonce are having to get creative when it comes to getting snaps for their Instagram profiles.

But I’d have thought that a multi-millionaire and 28-time Grammy Award winner could have found somewhere slightly more glamorous than what appears to be the staircase in a multi-storey car park. 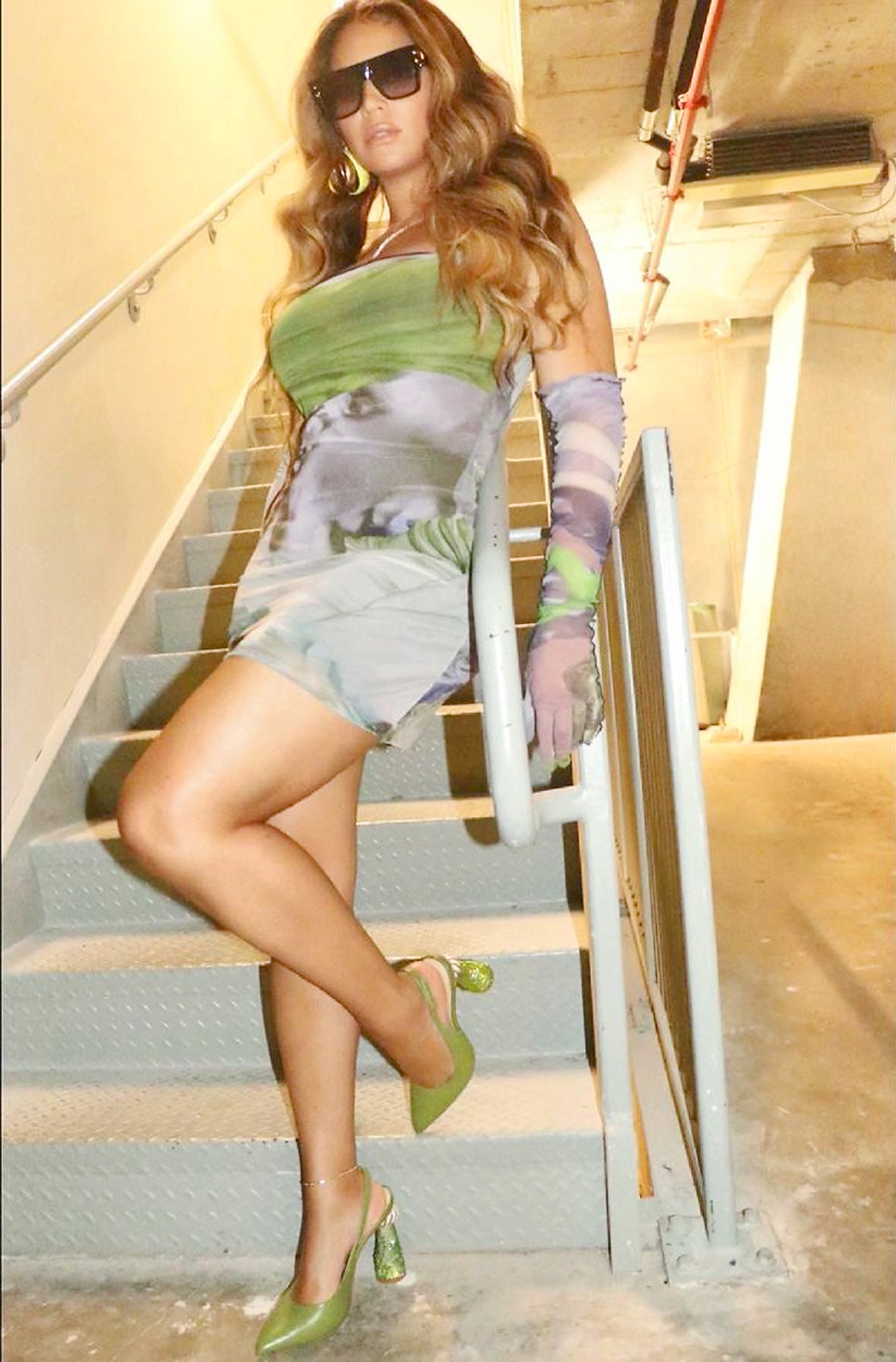 Perhaps she had just popped out to Asda and decided to get dolled up to get the groceries, but she posted this photo without a caption, so we’ll never know.

The Formation singer has been pretty quiet in recent months but it’s her 40th in September.

TAYLOR SWIFT is already re-recording another of her early albums after Fearless (Taylor’s Version) became her third No1 within a year.

The singer, whose record topped the charts on Friday, vowed to remake her albums to stop others profiting after the news in 2019 that rights to her back catalogue were sold without her permission.

After getting the No1 in the US too, she tweeted: “Been in the studio all day recording the next one. It’s really so amazing what you all have done here."

Madness and the Fast Show’s Charlie Higson Are teaming up for a live performance at the London Palladium.

The band will perform new music on May 14 with special guests, with the show being streamed around the world.

Charlie will compere The Get Up, with tickets on sale this Friday. 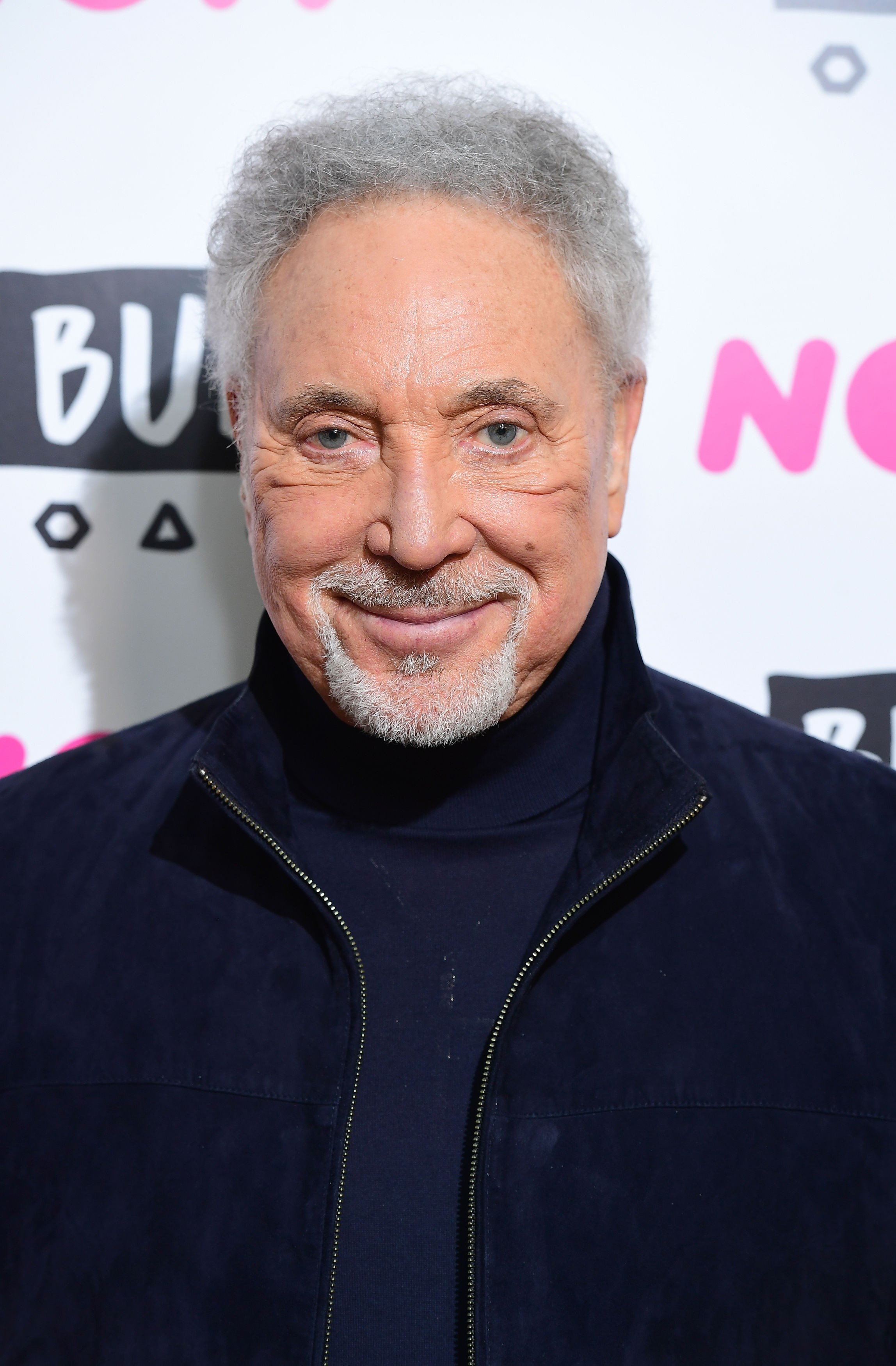 SIR TOM JONES is used to ladies throwing themselves at him but at the age of 80 he understandably needs a little, er, help with them.

Asked if his love life is still good, the Sex Bomb singer said: “Yeah, so far so good. There is always Viagra. I mean, that’s a little help. Here and there is all right.”

The Welsh legend also revealed the late PRINCE PHILIP had explained why he said the singer sounded like he “gargled with pebbles”.

Tom told the WTF podcast with MARC MARON, that the Duke recalled how delegates at a small businessmen’s meeting had been moaning about lack of Whitehall help.

Tom said the Duke told him: “I used you as an example. I said if a coal miner’s son from a little town in South Wales can become a f***ing multimillionaire, then what are you pr***s on about?

Becks has a ball

THE BECKHAMS put on a united front as they watched David’s US football team Inter Miami CF take on his old club LA Galaxy.

Goldenballs and his wife Victoria invited loads of friends to the tussle on Sunday – and it was all smiles as the goals hit home. 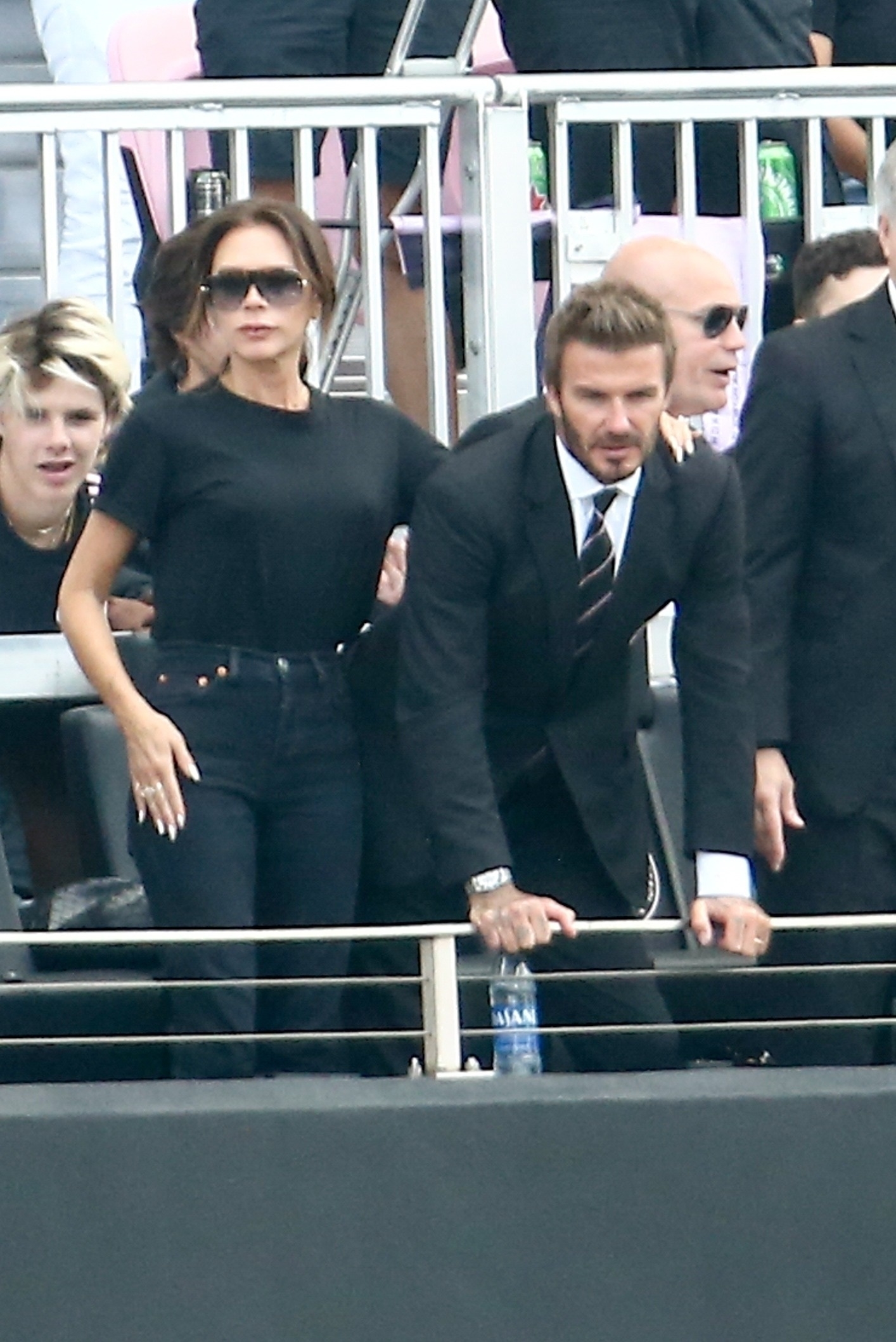 The pair were joined by their kids, Brooklyn, Romeo, Cruz and Harper plus Brooklyn’s fiancee Nicola Peltz and her family.

Pals cheering on from the stadium – which David and other investors have built from scratch – included supermodel Gisele Bundchen’s husband, NFL star Tom Brady.

Becks’ side took the lead just before half-time in an emotional rollercoaster of a clash. But sadly things didn’t turn out as he had hoped, with Inter Miami losing 3-2.

Although he didn’t get the win he wanted, I have no doubt Becks will be laughing all the way to the bank over the next few years thanks to the club. 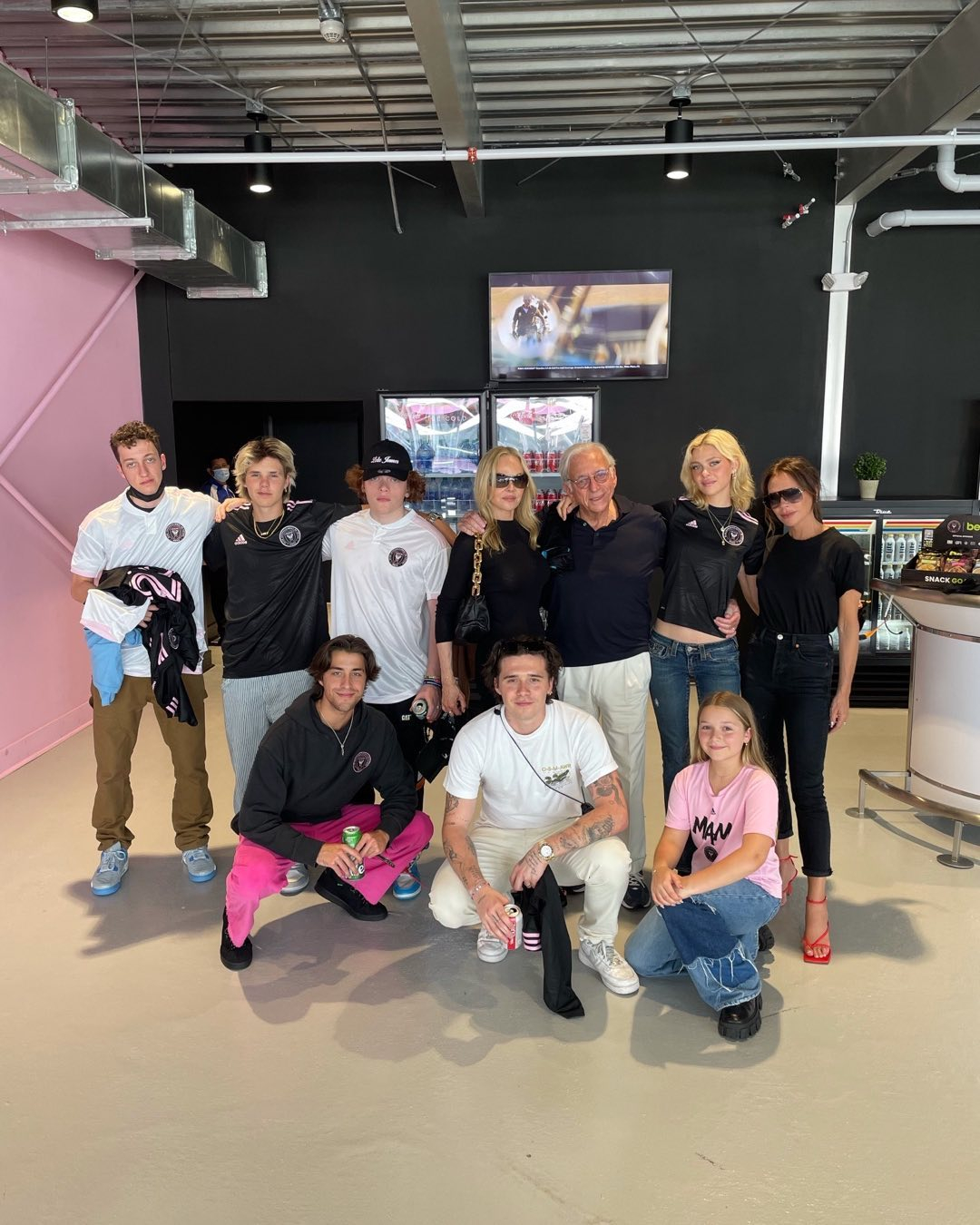 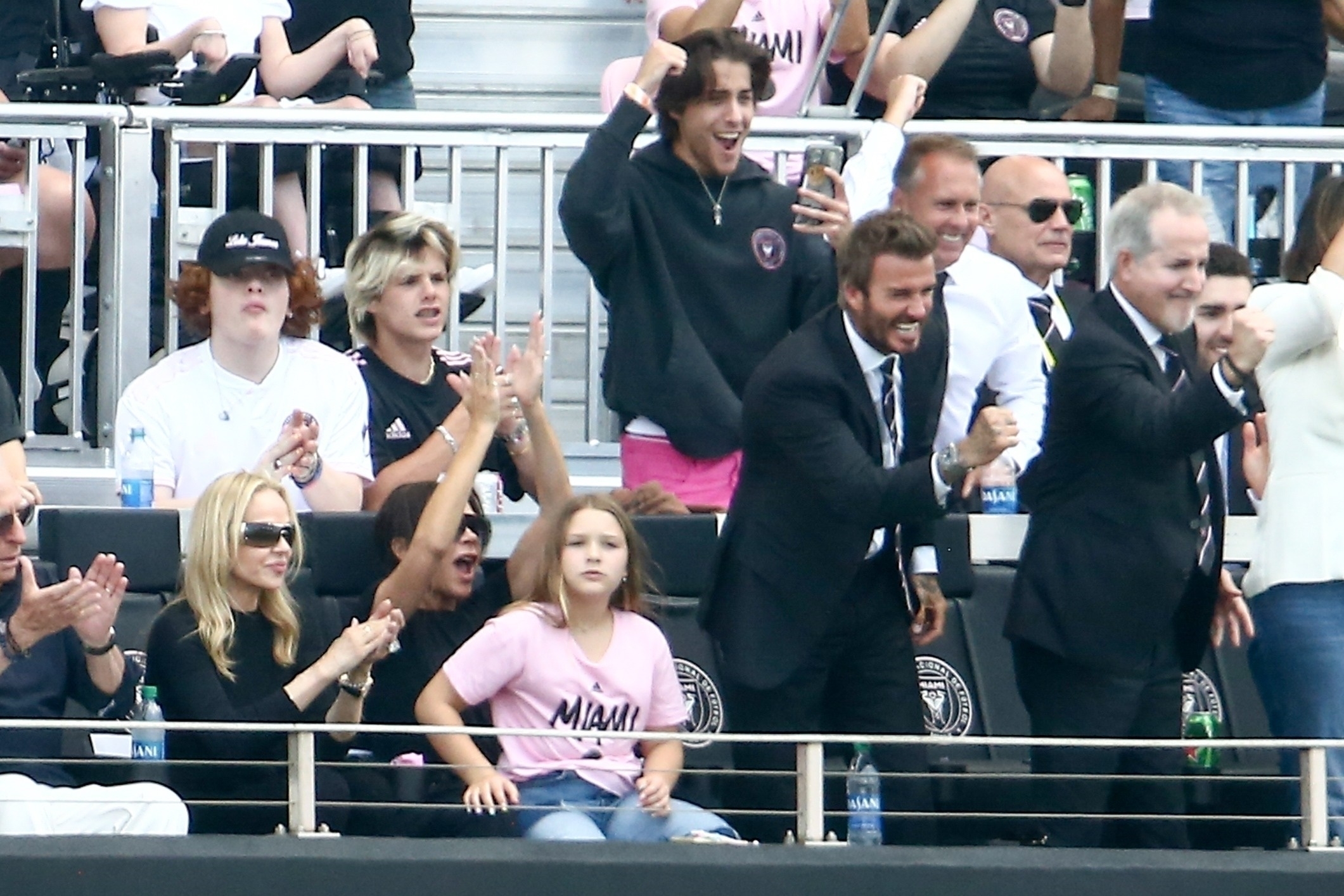 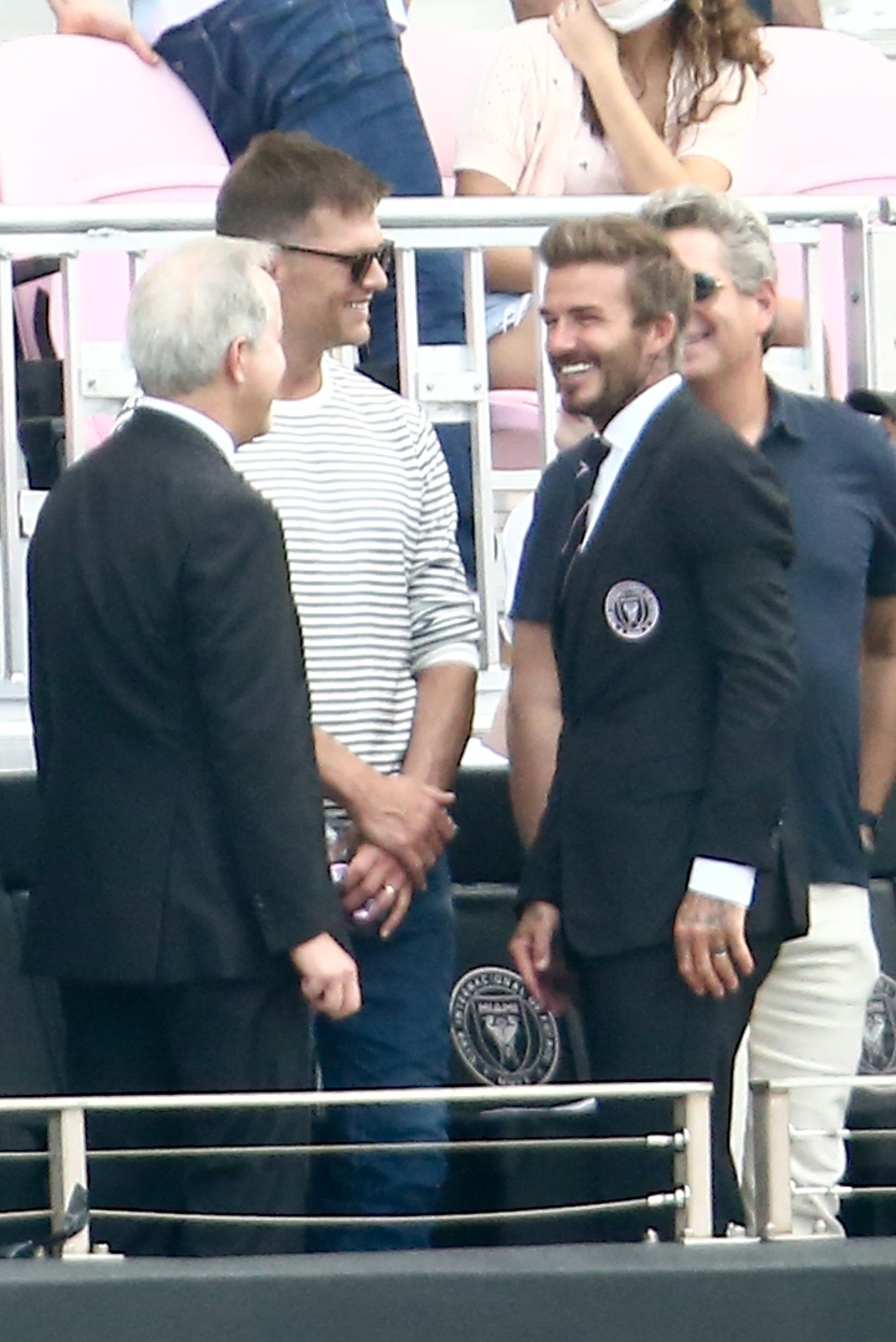 Not a Lottie luck in love

LOTTIE MOSS may have been hoping to catch the attention of some guys by sharing this photo, captioned: “Lounging around the house.”

Despite looking amazing in the pink lingerie, the model confessed she hasn’t had much luck when it comes to her love life. 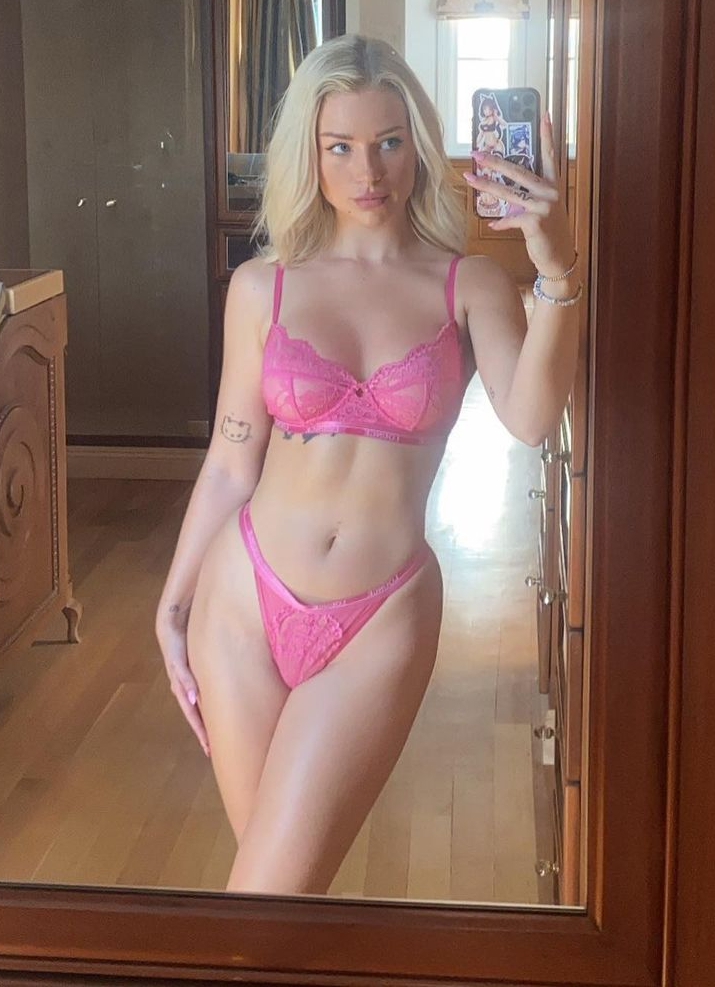 Lottie, who has been modelling in the US, tweeted: “Haven’t been able to keep a man longer than a week for literally ever, am I the problem lol?”

SHE has interview­ed endless famous people but Ruth Langsford drop- ped a clanger when she mistook football legend Sir Alex Ferguson for a taxi driver.

Her husband and This Morning co-host Eamonn Holmes explained he had been on the same flight as Sir Alex when the former Manchester United manager offered him a lift home. 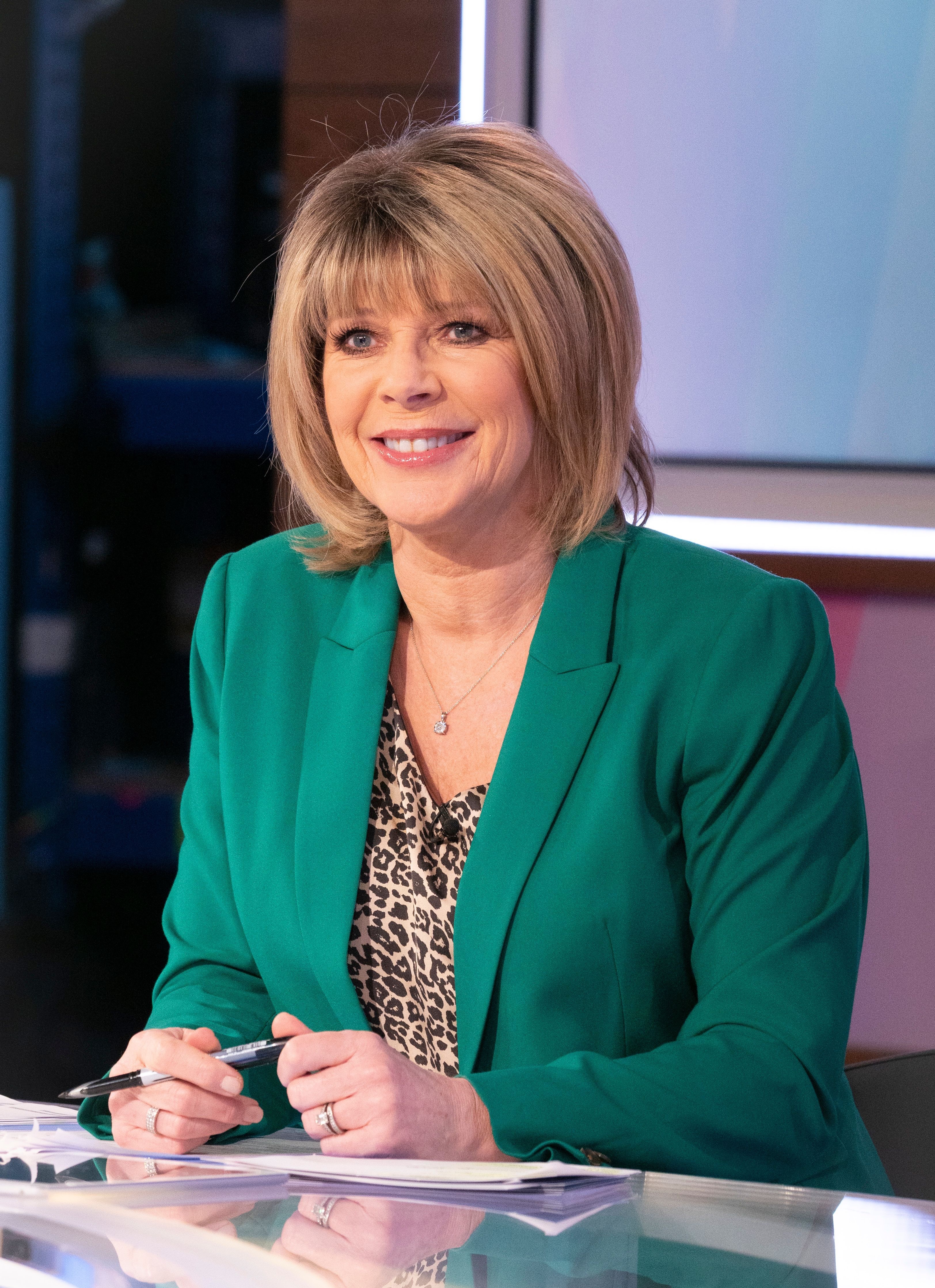 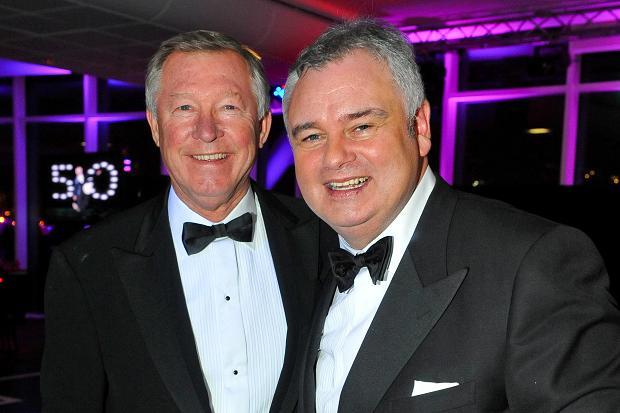 The Red Devils fan continued: “He was picked up by this big S-Class Mercedes and I put my suitcase in the car with him.

"I got a quick phone call and my battery was dying so I said ‘Ruth, the Boss is coming’.

“We were only three minutes from the airport and I try to get my key in the door to say to Ruth but she’s at the door and immediately looks around me and goes, ‘Yes, how much do I owe you? How much?’

“Behind me, dress­ed in a grey suit with a white shirt and red tie, is the Boss carrying my case and she thinks because of the car, he’s the taxi driver.”

Telling the tale on UTV in Northern Ireland, he added: “I go, ‘No, Ruth. It’s Alex Ferguson’.”

It makes my toes curl just thinking about it.

ROBBIE WILLIAMS was on the verge of becoming a proper silver fox after ditching the hair dye during lockdown.

But perhaps his grey hair was getting to him, as the Rock DJ singer miraculously has jet black locks once again. 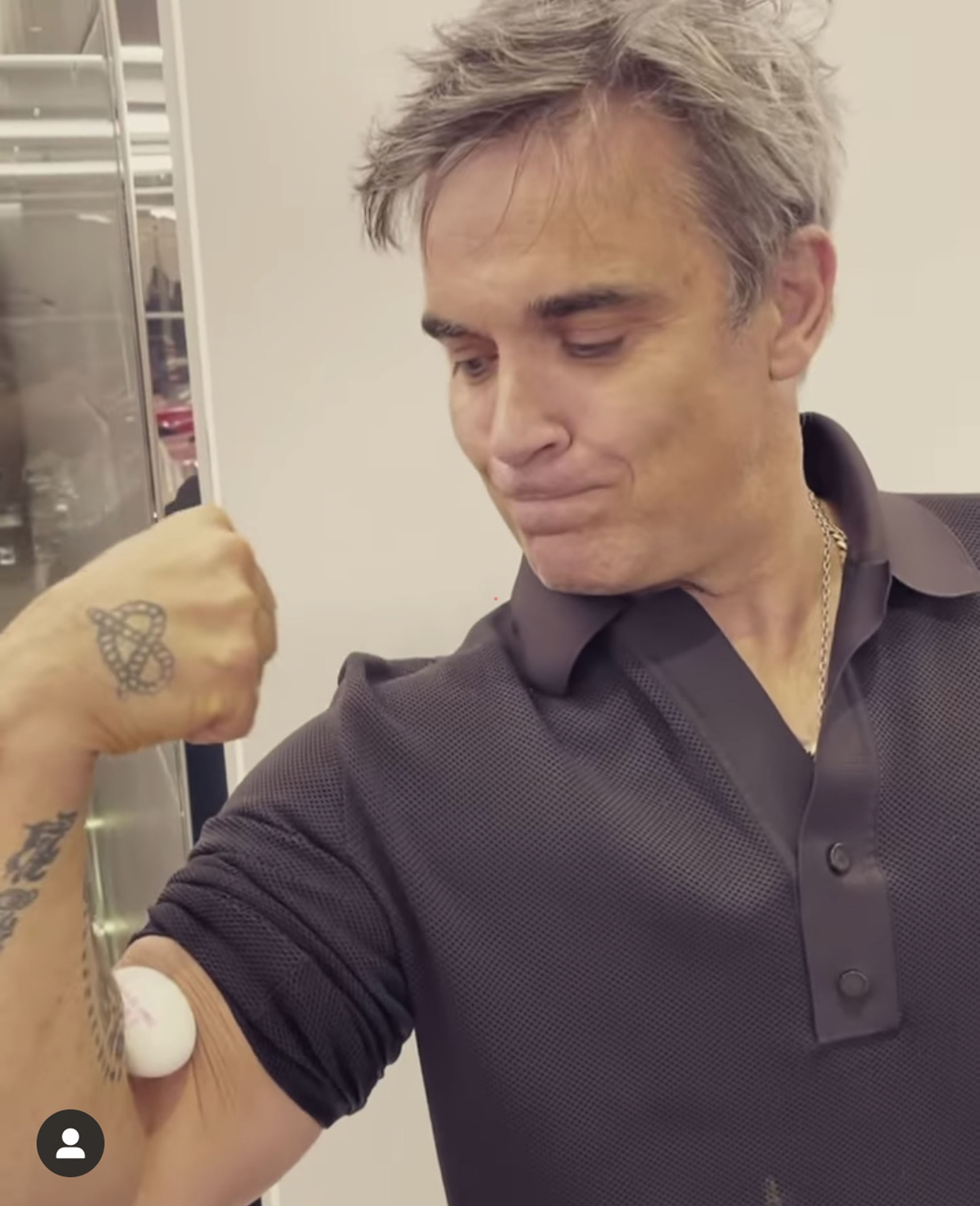 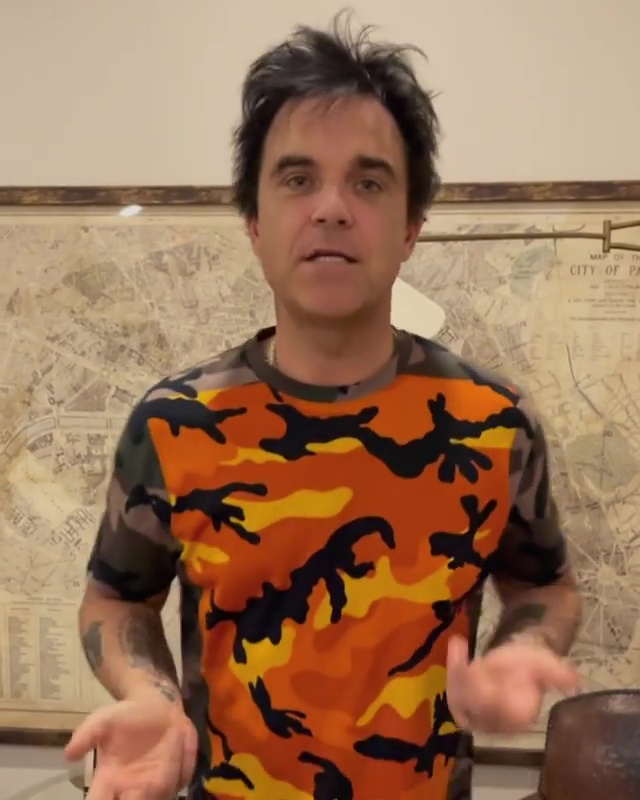 He revealed his new, but old, look in a video posted by his wife Ayda on Instagram.

He said: “A message to the world – yes, I’ve dyed my hair. Do you know why? Cause I like to and it’s fun to do stuff like that.

“Not because of, ‘Oh look he’s getting really old and grey,’ which I am too. Which I don’t mind. Chill out.”

Robbie later joked he had also dyed his eyebrows by putting “little bits of white” in them.

There’s fuel for old enemies Liam and Noel Gallagher to rip into him if I’ve ever seen it.