In starring in “Raya and the Last Dragon” and giving voice to the title character, Tran joins a long line of Disney Princesses, from classics such as Snow White and Cinderella, to newer inventions like Merida and Moana. That alone would be understandably intimidating, but “Raya’ came with some added pressure for the “Star Wars” star.

As Raya, Tran is also cast as the Mouse House’s first Southeast Asian Princess; while the film takes places in a fantastical land called Kumandra, it was inspired by Southeast Asian cultures from Vietnam, Laos, Indonesia, Myanmar, Malaysia, Cambodia, Thailand, and the Philippines. For Tran, the child of Vietnamese immigrants, picking up that mantle was nothing short of terrifying. Maybe that’s why she had to do it.

“My first response was just absolute fear,” Tran said during a recent interview with IndieWire when asked about her response to the casting. “I was like, ‘no, what?’ I grew up watching Disney movies and loving these movies, and I grew up loving these sort of magical worlds that these characters inhabited. And I always wanted that.”

Much like her experience being cast as Rose Tico in the most recent “Star Wars” trilogy — that part was her first major one, and she landed it while working full-time as an assistant at a creative recruiting firm — Tran was both thrilled and scared of being invited into a new realm.

“This is the same thing that happened to me with ‘Star Wars,’ too,” she said. “The second someone’s inviting you into that experience, my first instinct is complete disbelief and complete fear that I might not be able to do it, if that makes sense. Because I’m just like, ‘No, I’m scared!’ It’s like the overwhelming bigness of these worlds and knowing what they mean to people.”

“Raya and the Last Dragon”

But fear didn’t stop Tran from taking on “Star Wars,” and it certainly didn’t get in the way of “Raya and the Last Dragon.” Both projects offered the actress not only a major step forward, but also opened the door for wider representation in some of Hollywood’s most long-standing and coveting franchises. Tran keenly understands what that means, especially in a place like Hollywood, so often resistant to big changes.

“The value of it is that it’s really cool to be part of something that is changing the way that we see these types of stories and certain types of people,” Tran said. “It means a lot to me that I get to have the privilege of telling stories. I never set out in the world to be the first anything, I just was trying to survive. I was struggling to be a working actor at all. And then all of these things that felt like magical miracles happened, and they keep happening.”

When Tran took on the role of Rose Tico, she became the first Asian-American woman to have a leading role in the “Star Wars” series. She’s always been fully cognizant of what all those firsts mean even if, as she said, it’s important to “recognize that, hopefully, the first is not the last and that’s a very big thing for me.”

She added, “The pressure of it is very real as well. There’s this sort of idea that if this movie doesn’t do well, then it’s our only shot. And it’s like all of these sort of false narratives that I have in my head, and maybe false narratives that are perpetuated by an industry that, for so long, has been held in the power of one type of person. … When I think about all the people that I’m seeing work in this industry now that are continuing to open doors for people like them, God, that’s really inspiring.”

“Raya and the Last Dragon”

Representation is also at the forefront of “Raya and the Last Dragon,” which features a mainly Asian and Asian-American voice cast working alongside Tran, including Awkwafina as the last dragon Sisu, plus Daniel Dae Kim, Sandra Oh (Tran has been a major fan since her work in “The Princess Diaries”), Gemma Chan, Izaac Wang, and Benedict Wong. The film, a colorful, adventurous, and often quite funny offering, follows Raya as she seeks to reunite the fractured Kumandra by finding Sisu (who already saved the kingdom once, long ago) and inspiring the powerful dragon to work her magic one more time.

The film rejects some of the usual Disney tropes — Raya doesn’t have a love interest, for one — and much of its drama and emotion instead relies on complicated platonic relationships, particularly the one between Raya and Chan’s character Namaari, another Kumandran princess who betrays Raya early in the film.

“Every single one of these characters is so nuanced and they all have such a specific point of view of the world,” she said. “What’s really cool about specifically Raya and Namaari’s relationship is that Namaari starts out as a villain, but then as the movie gets further on, you start to recognize that she’s really just someone who’s coming from a different place than Raya. You start to realize the justifications for her actions and why she’s doing what she’s doing. There is no real ‘us versus them,’ there is no real villain or good guy. It’s really just people trying to do their best, and we’re sometimes not able to see where other people are coming from.”

The film carries with it a profound message of forgiveness, something that Tran says the world “absolutely” needs now. Even more than that, however, Tran is inspired by the journey that Raya goes on, which eventually hinges on her ability to trust (and, yes, forgive) the people around her. It’s a message that’s both timely and timeless.

“Seeing the way that Raya sort of foregoes her own self-preservation and puts herself on the line, not even to fight for a better world that she knows exists, but to fight for a better world that she hopes exists,” Tran stopped to more fully expand on the idea. “That’s a very important distinction there for me, because I think in the real world, we all secretly hope that we can make the world better, that there is a better world if we worked hard enough,” she said. “The truth of the matter is a lot of the times everything is so broken and so hard and so scary, that we’re really fighting for something that feels totally unattainable, so to see a character put everything on the line to do that is really powerful for me.” 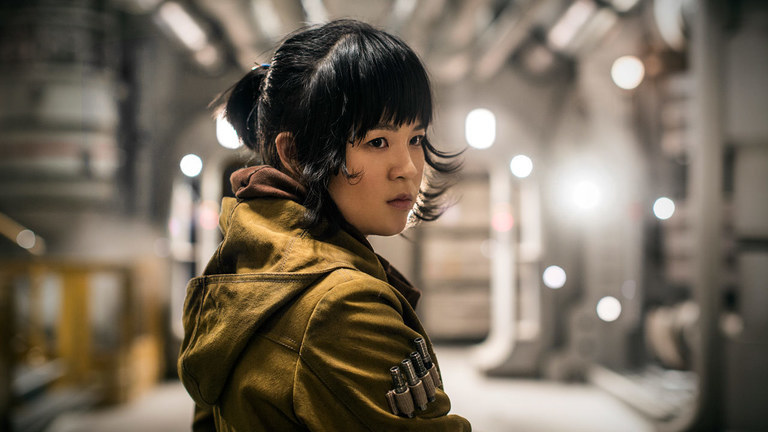 Tran knows a thing or two about power. While her tenure on the latest “Star Wars” trilogy was met with vicious online harassment from “fans” of the series, Tran has harnessed her own narrative. After being forced off social media by the harassment, she penned an emotional essay for The New York Times about the effects of the hate speech she experienced, and about growing up feeling “other” and undesired both as a woman and a person of color.

The 2018 piece ended with a powerful rallying cry for all marginalized identities, with Tran writing in part, “I want to live in a world where people of all races, religions, socioeconomic classes, sexual orientations, gender identities and abilities are seen as what they have always been: human beings.” While the experiences that pushed Tran to write the piece remain disheartening, the results have been inspiring, just like Tran.

Asked to reflect on her time with “Star Wars” a year after the conclusion of the trilogy, Tran considered her thoughts carefully, before offering an answer that speaks to her next steps and continuing good attitude. “I think there’s always good and bad things about an experience,” Tran said. “But the thing that I want to keep with me is that looking for the good is the most important thing.”

“Raya and the Last Dragon” will hit select theaters and streaming via Disney+ Premier Access on Friday, March 5.