Nicola Walker and Sean Bean were back on Monday with their new BBC drama Marriage. The four-part series follows couple Emma and Ian as they go through the trials and tribulations of married life. The first episode, which aired on Sunday night left viewers divided, with many complaining about the quality of sound.

And while some fans were loving Nicola’s latest series, others were less than impressed.

Some viewers even claimed to “switch off” the programme within minutes.

The episode picked off with Emma and Ian going to watch their daughter, Jessica (Chantelle Alle) perform at a gig.

It also showed the strained relationship Emma has with her dad Gerry (James Bolam) and how his need for attention is affecting her marriage. 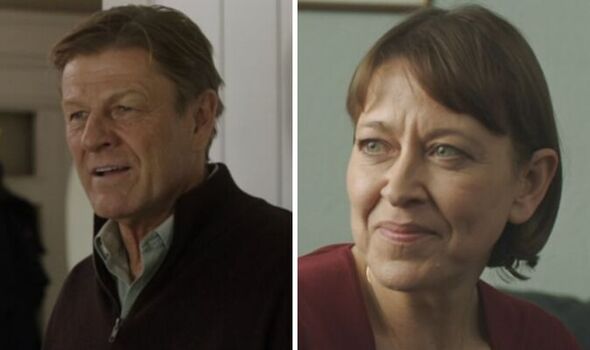 On the night of Emma and Ian’s 27th wedding anniversary, Gerry needed his daughter’s help because his oven wouldn’t work.

Emma was angry but still went over to her dad’s house to try and sort out the problem.

It was clear that Gerry wanted Emma to stay and keep him company, despite her arguing back that it was her anniversary and she was going out for a meal.

To make things even worse, Ian caused trouble for Emma after she told him she was going away on a work conference.

However, in a fit of jealousy, on the morning of her conference, Ian turned off the Wifi because he didn’t want his wife to go without him.

Following the episode, viewers took to social media to share their thoughts on how the storyline was playing out.

Michelle tweeted: “I’ve aged considerably in the last 35mins waiting for something anything to keep me awake while I’m losing the will watching #marriage tonight. #seanbean.” (sic)

Dave continued: “Watched a few minutes of #marriage on the BBC and my main question is why was this made?” (sic)

“Sean Bean has a phobia of flying yet serenely engrossed in the phone at the airport, calmly stashing case in overhead then terror-stricken on take off. Constant effing between bickering grunts. Worst drama ever. Boring rubbish.”

“Christ this is painful. There’s more action in my sock,” MJ went on to tweet.

Martin Recci said he had binge-watched all four episodes, before commenting: “Don’t waste your time.”

User @clancy3105 replied: “##marriage thanks for the heads up! Thought it might get better but had to switch it off! The actors must have got a good pay cheque to even bother with it!”

However, some viewers were loving the second instalment, with Julie Reed tweeting: “I’m pleased I gave it another go, enjoyed it tonight. It’s different!! Love the opening and ending music.”

Margaret Graham added: “Am really enjoying #marriage but am amazed by those who apparently are being forced to watch it and can’t either change channels or turn off their telly…”

Linda replied: “I watched the whole series today. A bit unsure at first but absolutely loved it & gutted when it ended.” (sic)

Marriage continues on Tuesday night at 9pm on BBC One.