MAURA Higgins was accused of ruining The Wheel contestant's life last night after fluffing a question about her native Ireland.

The Love Island star, 30, lost Barry £10,000 after she incorrectly answered 'which Irish county is the furthest from Tipperary?' 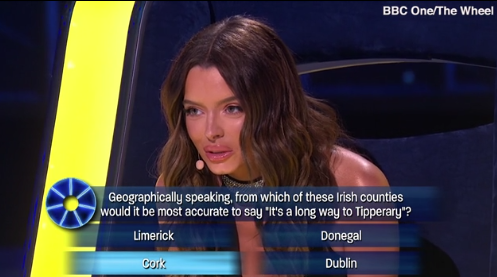 Despite claiming her homeland was her specialist subject, Maura was left scratching her head as she was presented with possible answers: Limerick, Donegal, Cork and Dublin.

Maura, who toured Ireland for her presenting role on This Morning, couldn't choose between Donegal and Cork.

She said: "Donegal I think, Donegal is up north, I would say Donegal is the furthest I think.

"I am between Donegal and Cork I think… This is pressure! But I also think Cork is the furthest… Oh this is so hard!"

Eventually she went against her first answer and chose Cork, telling host Michael McIntyre: "I am going to be ashamed of my life, I will never be let back into Ireland!"

And her words came back to haunt her, as viewers on Twitter had their say. 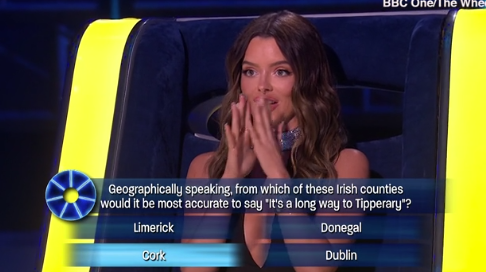 "I’m actually a little embarrassed that Maura didn’t know where Tipperary was #thewheel and felt so gutted for Barrie at that point…. Ban @MauraHiggins from Ireland." 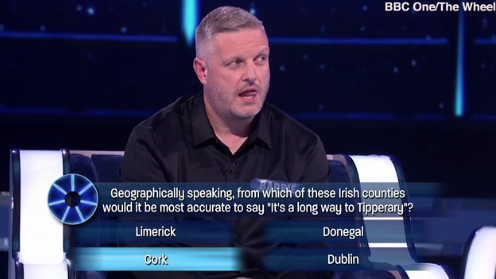 Maura defended herself this morning, posting that she did have the answer but cracked under the pressure.

She said: "Had the correct answer the first time but the pressure got to me….the end!! #thewheel."

The celebs' performances on last night's show were so bad that host Michael McIntyre said the programme had been the "worst night of my life".

Their role is to help the contestants answer general knowledge questions to build a big cash pot, but not one succeeded last night.

Michael vented: "I am so horrified. Tony [Blackburn] has lost his job because he has embarrassed himself to much with his questions.

"Maura can't go back to Ireland.

"This has been the worst night of my life, I am never speaking to anybody here ever again.

"It says on the autocue, 'Thank you to the celebrity experts', but I don't think I should read that one."