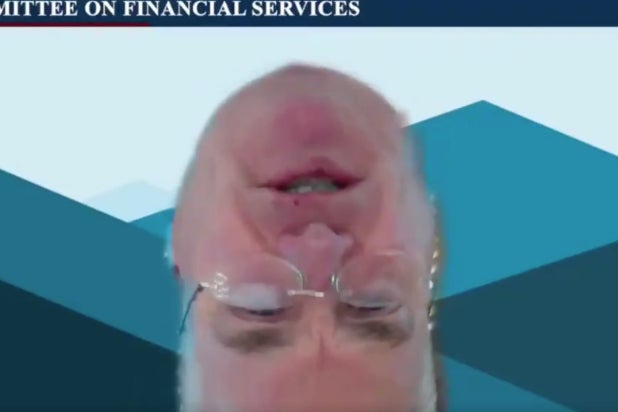 Representative Tom Emmer had the ultimate Zoom fail on Wednesday when he appeared upside down as a floating head during a virtual House Committee on Financial Services meeting. The strange presentation caused Representative Maxine Waters to ask if he was OK.

Emmer was confused about why he was being asked, especially since Waters didn’t seem overly concerned. Before he could ask anything else, someone clued him in to his mishap, telling him “you’re upside down, Tom.”

Unfortunately, technology struggles reigned supreme as Emmer responded, “I don’t know how to fix that.”

Fellow lawmakers attempted to help fix the problem, with some of them chiming in to offer one bright side: “At least you’re not a cat!” The cheeky jab came the day after Texas lawyer Rod Ponton appeared in a zoom committee meeting and had a similar fail, with a cat filter that showed him as a white kitten.

Other lawmakers got in on the fun, asking “is this a metaphor?” and joking that Emmer was doing a handstand.

Emmer continued to try to fix the problem on his own, with no luck. “I don’t know what happened,” he said. “It just came out this way. I turned it off, turned it back on, and it’s still…” While Waters and the rest of the room waited, Emmer eventually managed to fix the problem and the meeting was able to get back on track.

For what it’s worth, Emmer seemed to take it all in stride and even posted a screencap of his Zoom fail on his own twitter account with the caption “I am not a cat.”