Move on! Charlie Stayt red-faced after being mocked by BBC Breakfast co-star

Charlie Stayt's joke gets mocked by other presenters

Naga Munchetty and Charlie Stayt were back on Saturday to give BBC Breakfast viewers the latest breaking news headlines. Holly Hamilton was also in the studio to share the latest sports news, while meteorologist Chris Fawkes presented the weekend’s weather report.

At the beginning of the show, Naga and Charlie spoke with Holly about sporting puns as they chatted about cricket.

Throughout the programme, the hosts also tried to come up with their own unique puns.

However, during one segment, both Holly and Naga mocked Charlie’s joke.

“Now my efforts so far with the play on words of the cricket have been met with some derision, I would say,” Charlie began. 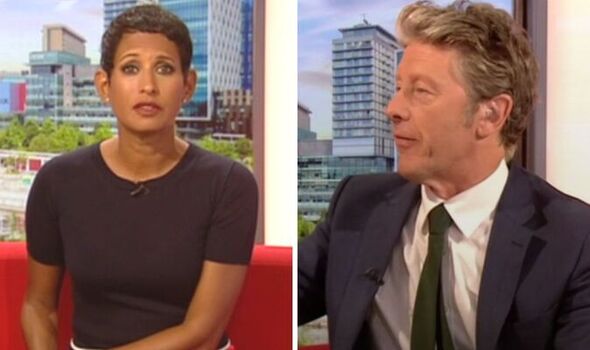 “It was mildly impressive for 6am,” Holly replied.

He continued: “I’ve been working on this one. Folks and Stokes get great results.”

Mocking his pun, Holly continued: “Have we got a tumbleweed?”

Moving the segment on, a red-faced Charlie added: “Move on, Chris, have you got the weather?”