Professional athletes, having trained with laser-like focus on a single pursuit for most of their lives, are not always the most interesting people. Tennis provides a few exceptions. John McEnroe, Serena Williams, and Andre Agassi all sport personalities as explosive off court as they are (or were) on it. Roger Federer is known for being a gentleman. Gael Monfils, a Frenchman, has a certain je ne sais quoi. Most everyone else makes the commentators sing for their supper.

Naomi Osaka can be soft-spoken, though not when it comes to her support for the Black Lives Matter movement. The 23-year-old has four Grand Slam titles to her name and is currently ranked No. 2 in the world in women’s singles. Being a little camera-shy has no bearing on her tennis, but it doesn’t make for great movie-making.

In three vaguely indistinguishable episodes, the Netflix docuseries “Naomi Osaka” offers a small window into the young champion’s world. Over the last three years, the series follows Osaka over a cycle of training, fashion shows, world travel, and major tournaments. With generic episode titles like “Rise,” “Champion Mentality,” and “New Blueprint,” the series turns an endless loop of Osaka’s daily grind into quite a dull endeavor, which is maybe the point (though that’s a generous read). Still, with little focus on the actual tennis and a notoriously private subject, even diehard Osaka fans may find themselves yawning. 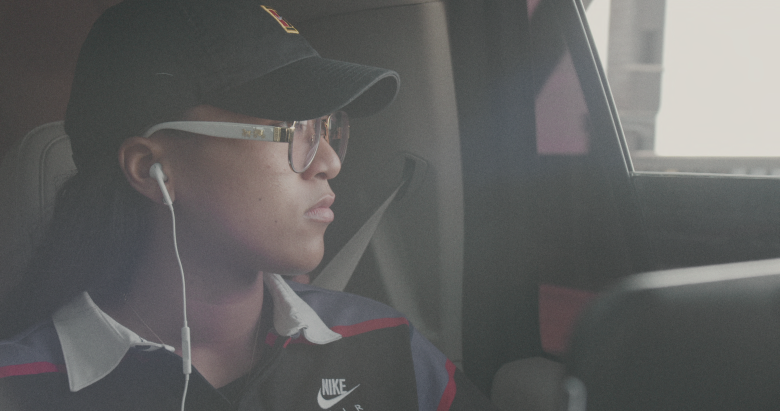 The series begins with Osaka’s now infamous upset at the 2018 U.S. Open, when she overtook her childhood idol and living legend Serena Williams to win her first Grand Slam title. After receiving a warning for a coaching violation which is widely agreed to have been unfair, Williams voiced dismay toward the chair umpire. Though Osaka clearly outplayed Williams, her victory was marred by the high-profile dispute. In footage of the award ceremony, she appears crestfallen, accepting the trophy through tears. Unfortunately, simply rolling tape on that moment would have produced more gripping drama than the entire docuseries.

To fans of rowdier sports, tennis may seem a relatively tame pursuit. Few films have managed to capture the rolling thrill of a mid-match momentum shift, or a beautifully executed winner on a crucial point. “Naomi Osaka” prefers to marinate in the post-match interviews, typically belabored and low energy for Osaka, or the composed tranquility of a post-match massage.

The series captures glimpses of Osaka’s humanity, which is obvious in her actions if not always in her placid  demeanor. She displayed sportsmanship beyond her years when, after beating up-and-coming American player Coco Gauff in the third round of the 2019 U.S. Open, she insisted on sharing the on-court interview. She took special pains to praise Gauff’s parents, drawing a connection between their shared success as young Black women. “I remember I used to see you guys training in the same place as me,” she said. “For me, that fact that both of us made it, and we’re both still working, I think it’s incredible.”

“Naomi Osaka” makes explicit the racial justice work that has accompanied Osaka’s rise in prominence over the last few years. During last year’s U.S. Open, which she won, she famously wore black face masks with a different name of a Black person who had been killed by police. When the white commentator asks her what message she was trying to send, she asks defiantly, “Well, what was the message that you got?”

As last summer’s George Floyd protests erupt around her, the third episode digs deepest into Osaka’s politicization. “There’s this build up of things I want to say, but I’m super scared. I’m supposed to be the silent, good person, just maintain the image,” she says. Though her parents do appear in the series, they remain mostly in the background. In a rare and moving moment of self-reflection, her father, who is Haitian American, says of her alignment with BLM: “It feels like she’s standing up for me.”

As she looks to defend her U.S. Open title later this summer, the Osaka we see on court will likely be much more dynamic and exciting to watch than the Osaka we see in this series. For lovers of the sport, that’s just fine.