The White House briefing room contains just 49 seats in very tight quarters, a fact that makes for quite a bit of vying for the choicest spots.

On Friday, the White House Correspondents Association unveiled its new seating chart for the space, with such outlets as The Grio, The Washington Blade, local station groups and business networks are getting assigned seats. Outlets like One America News Network, BuzzFeed and The New York Daily News no longer have assigned seats compared to the last revision in 2017.

The changes will take effect as of Jan. 3.

In a letter to members, WHCA President Steve Portnoy wrote that criteria for seating assignments included long-standing service on the beat, “ensuring that the seats are dependably filled, as assigned” and “seeing to it that the briefing room reflects the country it covers.”

“To enhance diversity in the briefing room, assignments have been given to organizations that target Black, Hispanic and LGBTQ audiences, as well as readership and viewership that lies across the ideological spectrum,” wrote Portnoy, White House correspondent for CBS News Radio. “The WHCA has also for the first time granted seat assignments to local television station groups, which reach viewers in markets across America.  Additionally, business networks that have covered the White House for years have finally been granted spots on our chart.”

The most visible seats are, obviously, in the first row, and those assignments have not changed: NBC News, FOX News, CBS News, AP, ABC News, Reuters and CNN. Nor has the second row: The Wall Street Journal, CBS News Radio, Bloomberg, NPR, The Washington Post, The New York Times and USA Today.

Missing from the list compared to 2017: SiriusXM, Westwood One, The New York Daily News, Talk Radio News, OAN and BuzzFeed.

Among the outlets moving up a few rows: The Daily Mail. It was in the 6th row; now it’s in the 4th. Al Jazeera and HuffPost also are among those getting their own seats, rather than sharing with another outlet.

In an effort to socially distance, the WHCA temporarily scaled its assignments way back as the Covid 19 pandemic worsened in March, 2020, with a pool of just 14 outlets in the room. The WHCA in April, 2020 voted to remove OAN’s Chanel Rion from the pool for violating social distancing guidelines. 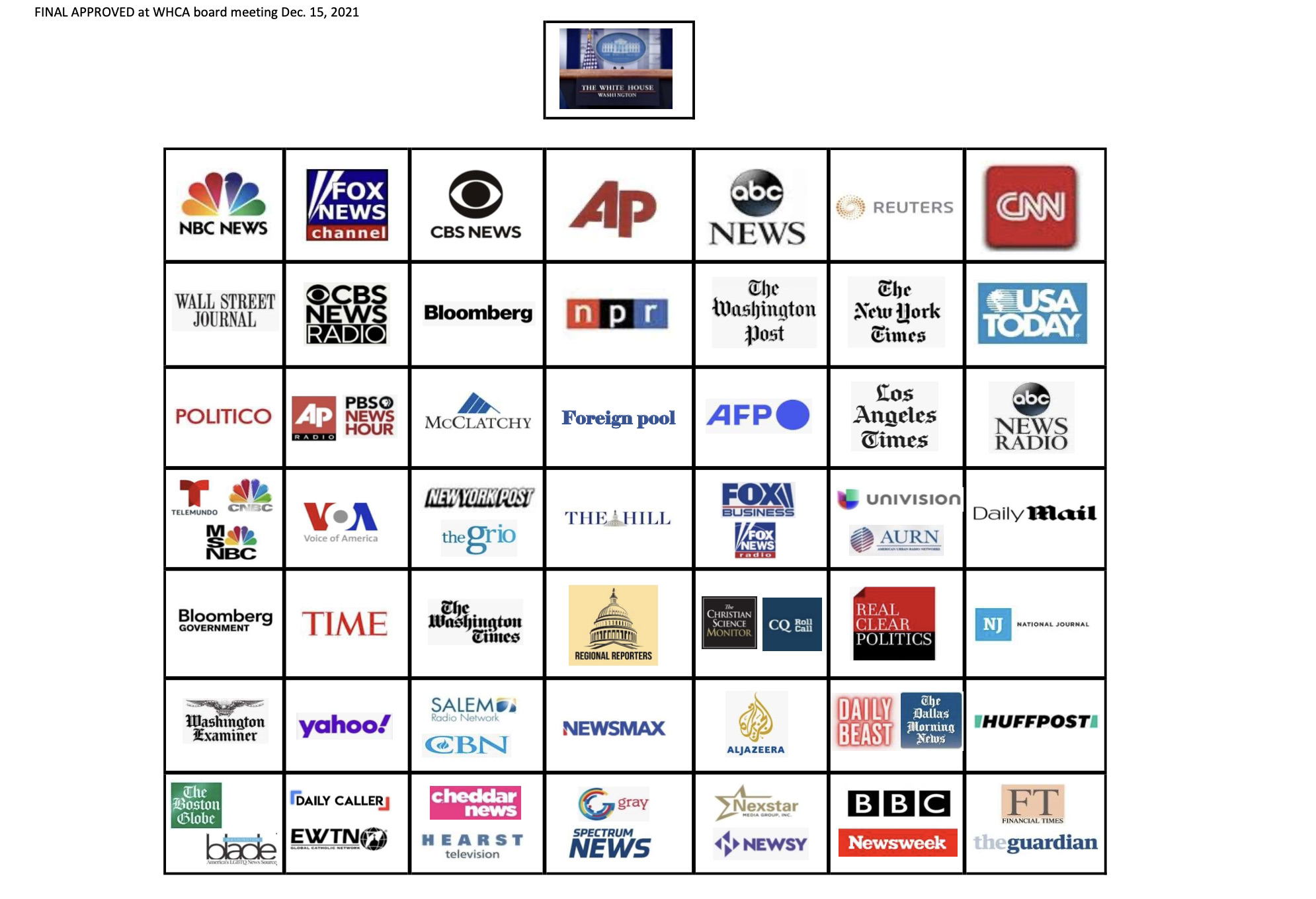