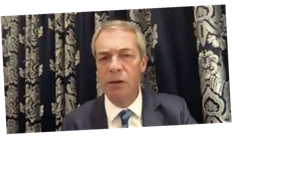 The former UKIP leader is currently in Pennsylvania, campaigning for President Donald Trump as the votes roll in for the 2020 US election.

However, when Piers brought up controversial remarks made by Trump at a press conference back in April, Nigel was quick to defend him.

At the time, Trump suggested a disinfectant could be added to the body "by injection inside or almost a cleaning" in an effort to defeat Covid.

Turning to medical experts, he added: "So it'd be interesting to check that."

However, when Piers spoke about the President's theory that "bleach" could cure the deadly virus, Nigel took offence.

Blasting the remark, Piers referred to the President’s "nonsensical cure theories like bleach and so on".

Nigel then snapped: "No, no, no, no, no, end this nonsense. He never mentioned bleach Piers. Do not allow your viewers to hear that."

Insisting disinfectant was entirely different to bleach, he swiped: "Grow up and stop being fake news, he never said bleach."

Piers was defiant, pointing out that bleach was a form of disinfectant, as he asked: "Sorry Nigel, have I made that up?"

In response, Nigel fumed: "You are sinking to the gutter by talking about bleach."

Trying to prove his point, Piers played a clip from the controversial press conference, in which Trump made reference to disinfectant.

Nigel raged: "He didn't use the word bleach and you damn well know that."

Later, Nigel decided to take a swipe at GMB's ratings, remarking: "I'm not surprised your viewers are going down."

However, Susanna Reid then leapt to Piers' defence, pointing out GMB has enjoyed record ratings in 2020.

She exclaimed: "Our viewers are going up! That is fake news, Nigel Farage."

Good Morning Britain airs on weekdays at 6am on ITV.

END_OF_DOCUMENT_TOKEN_TO_BE_REPLACED

END_OF_DOCUMENT_TOKEN_TO_BE_REPLACED
We and our partners use cookies on this site to improve our service, perform analytics, personalize advertising, measure advertising performance, and remember website preferences.Ok