Piers Morgan was back on form this morning as Good Morning Britain had invited two guests into the studio to discuss whether or not the term ‘pet’ should be used to describe a family animal. Joining him and Susanna Reid was Senior Media Officer at PETA, Jennifer White and it wasn’t long before she and Piers were locking horns.

It comes after the President of PETA Ingrid Newkirk has called on animal owners to stop using the word claiming it’s a derogatory and patronising term comparable to the treatment of women before feminism.

And it wasn’t long before Piers completely derailed the debate and ranted at Jennifer about the point she was trying to make.

Those watching at home saw Jennifer explain: “We don’t hate the word pet, we are encouraging people to use a better word.”

“Ok, well let me ask you, what are you changing the name of the organisation to?” Piers hit back but Jennifer defended: “Its an acronym!” 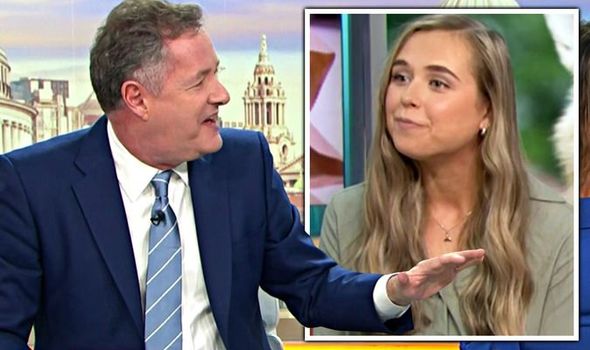 “But it’s got pet in it! You’re literally called PETA!” Piers shouted, but Jennifer was adamant: “I think you’re missing the point and there is academic research -“

However, she was cut off my Piers: “You keep telling me I’m missing the point, but I think I’m on point really – you want to ban the word pet, you want your organisation to carry on being called PETA?”

Trying to regain some control, Susanna interjected: “That’s because it’s the People of Ethical Treatment of Animals.”

“Do you see the problem? Pet is offensive, I’m offended by your use of the word pet!” Piers remarked.

“But it’s not offensive, we’re not telling anyone it’s offensive,” Jennifer claimed, but Piers responded: “You’re literally telling people not to use the word pet – that’s why you’re here!”

“No we’re not! We’re suggesting that people could use the word companion,” GMB viewers saw Jennifer exclaim.

“I’m suggesting you should call yourselves companion-A,” Piers hit back facetiously.

Piers went onto read out a series of famous sayings which referred to animal behaviours, for example ‘Elephant in the room’.

After Jennifer claimed ‘sneaky weasel’ had “negative connotations” about the animal, despite Piers arguing how the animal “is sneaky”, he couldn’t help himself but go through several others with the guest.

“Elephant in the room is ok?” Piers asked and Jennifer replied: “We’re not against phrases.”

“Piers,” Jennifer remarked. “You’re a journalist, you know better than anyone the power of language.”

“Do you know where the word pet goes from?” Piers asked before telling Jennifer to reply because it was “his show”.

“You have no idea where the word pet comes from? It comes from a Scottish Gaelic meaning ‘tame animal’. Nothing offensive,” Piers explained.

The conversation then game to an end and following a moment’s awkward silence, Susanna said: “Think we’ve sort of ended.”

“Jennifer, brave attempt but I do wonder whether there are bigger fish to fry,” she continued.

The saying Susanna used riled Piers up, and half joking, half being ironic, he blew up and shouted: “Woah! You! Frying fish?”

Good Morning Britain created a poll on their Twitter page asking viewers and fans of the show to vote whether or not it is derogatory to call your four-legged friends ‘pets’.

One said: “This was hilarious!!! As much as I felt sorry for that girl being talked over, surely she is just the epitome of today’s snowflakes. Leave language alone, it’s fine!”

Another added: “We should stop calling a #pet a pet?? I am gobsmacked the world has gone nuts…”

“lol @piersmorgan has made me laugh out loud and usually I want him to shut up but on this subject…talk away and destroy that nutter #GMB,” someone else remarked.

However others weren’t happy with the way Piers conducted himself.

“It is ridiculous, but Piers treatment of Jennifer was puerile and shameful. We all have different views, I disagree with hers, but no need to shout over her. He destroyed here. Awful,” a tweet read.

Good Morning Britain airs weekday mornings at 6am on ITV.