Pistol on Disney Plus: Never mind the frolics… heres MY Sex Pistols 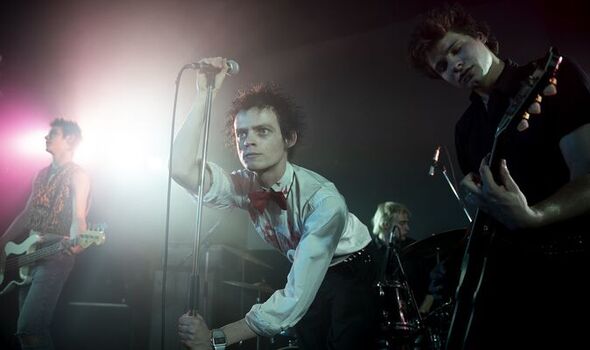 Danny Boyle’s new six-part series Pistol (landing Tuesday on, ironically, Disney+) tells the riotous story of the punk rock pioneers, exposing a new generation to the band who shocked polite society. Their first TV appearance, in December 1976, generated headlines like “The Filth And The Fury!” Now their banned hit God Save The Queen, which sparked outrage and violence in 1977 – Silver Jubilee year, – has just been re-released.

Lydon failed to shut them down, after Steve, drummer Paul Cook and original bassist Glen Matlock, outvoted him to allow Boyle to use their music.

Jones, 66 claims the Oscar-winning director had reached out to Lydon, who wasn’t interested.

The Sex Pistols’ story is surrounded by myths, mostly manufactured by their late manager Malcolm McLaren in his film The Great Rock’n’Roll Swindle – made, says Steve, without the band’s permission from the proceeds of their 1978 US tour.

Way back in March 1979, Jones told me: “The swindling thing ain’t true, that’s just Malcolm’s little kick, making out he’s conning everybody. That’s his ego. I mean he’s saying he got us together – he didn’t.

“He didn’t do half the things he said he did. Rotten was Rotten when we first saw him, spiked hair and ripped up T-shirts, nothing to do with McLaren.”

Jones also insisted they had set out to con record companies, not the public.

Steve was amiable, open and down-to-earth. He had made very little from the millions the band generated, just “a £14,000 flat and £60 a week for about two years” which stopped when McLaren’s management company went bust. Yet the songs he co-wrote, like Pretty Vacant and Anarchy In The UK, became anthems for the hard-up and the disaffected.

Pistol opens with Jones (played by Toby Wallace) helping himself to Bowie’s microphone at Hammersmith Odeon on the Ziggy tour.

Jones and his cronies also made off with most of Bowie’s PA, two of Rod Stewart’s guitars (in a burglary) and a drum set from a BBC studio.

He could barely read or write. He told me about dropping out of school and getting “popped” (sent to a remand centre) for 18 months.

In a dramatised scene in Pistol, Steve is saved from prison by McLaren, but this didn’t happen.

The series recreates the band’s infamous TV interview with Bill Grundy, which propelled them into the headlines, and shows the violence at their early gigs (the Nashville Rooms show in March 1976 was particularly gory).

Dropped by EMI and A&M, they were signed by Virgin which released God Save The Queen on May 13, 1977.

Despite being banned from the airwaves it sold two million copies, reaching Number Two in Jubilee week (they say the charts were rigged to deny them top spot).

The backlash was horrific. Lydon was attacked twice, once with a razor and once with a broken bottle. Cook was ambushed by six men wielding iron bars and the band’s river boat party was stopped by 50 over-zealous policemen.

To wear a Pistols T-shirt that summer was to invite abuse, or worse.

It is not easy to explain how revolutionary punk felt in 1977.Although politicians fumed and Labour-run councils banned gigs, punk kicked open doors inspiring thousands to start bands, perform poetry, create art, or in my case join the rock press.

Briefly it seemed the old, rigid class system meant nothing.

Punk happened at a time of strikes, spiralling inflation and mass unemployment – the “no future” Lydon sang about. The Pistols were in the right place and the right time. Their album Never Mind The B******* debuted at Number One. Noel Gallagher has called it “the most influential record of all time”.

Despite John’s claim the others would not have had a career without him, the band were powered by collective chemistry.

Pistol underplays Glen Matlock’s importance and overplays McLaren’s (who looks far too young – he was 30 in 1976). Steve was the original singer but, as Tony Parsons observed, although he had the front of a confidence man, he lacked the confidence of a frontman.

The Pistols’ story began in 1972 when Cook and Jones started a band called The Strand, with guitarist Wally Nightingale.

Changing their name to the Swankers, they began hanging out at McLaren and Vivienne Westwood’s shop Sex.

They flogged bondage gear, rubberwear and pornographic T-shirts on the Kings Road, Chelsea, where Matlock worked on Saturdays. They liked the shop because it had a jukebox and the shop assistants included Chrissie Hynde and Jordan – Pamela Rooke, who died last month. She is played by Game Of Thrones star Maisie Williams, and Hynde by Sydney Chandler.

The name “Kutie Jones and his Sex Pistols” first appeared on a Westwood T-shirt. When McLaren agreed to manage them he saw the Pistols as a kind of evil Bay City Rollers who would annoy people with a sound “stripped of all its slickness”.

Lydon – played with feral intensity by Anson Boon – was originally persuaded to audition for the role of vocalist by singing Alice Cooper’s “I’m Eighteen.”

He was electrifying – a hypnotic blend of sarcasm and rage – and the group became an uneasy alliance powered by tension and mistrust.

Their first performance, at St Martin’s College Of Art in November 1975, was disastrous. But they soldiered on, blagging gigs, attracting their exotic, hardcore Bromley Contingent fans (including Siouxsie Sioux) and creating a movement.

The rock press picked up on punk – Sounds was first – but Bill Grundy’s Today show, airing on December 1, 1976, was when the madness kicked in.

Glen left the following February, saying he was “sick of all the bull****”.

His replacement Sid Vicious (John Ritchie) couldn’t play at all. He was 21 when he died of a heroin overdose in New York in February 1979, shortly after the death of girlfriend Nancy Spungen.

“I liked Sid, he was a great geezer,” Steve told me a month later. “But he always wanted to die before he got old.”

Jones was “relieved” the Pistols had split, adding Rotten had turned into “a real prima donna” and that his Public Image band was “toss”. Lydon quit over McLaren’s self-aggrandising and deceitful film which saw Cook and Jones cavorting with train robber Ronnie Biggs.

I took issue with Steve over McLaren’s cheap tactics – using swastikas to shock (he’d tried the same stunt using the hammer and sickle with the New York Dolls) and Sid’s sick song Belson Was A Gas, which Jones disowned.

The one thing we don’t see much of in Pistol is Steve’s libido – his long string of flings included Chrissie Hynde and Nora Forster, now Lydon’s wife.

After a short dalliance with Sham 69, Cook and Jones formed the Professionals who Paul plays with to this day.

Pistol drops on Disney+ on Tuesday