From the moment that “Ratchet & Clank: Rift Apart” begins — and, in all likelihood, from the moment that it was first conceived — the latest entry in Insomniac Games’ signature franchise is anxiously preoccupied with its own relevance. And there’s a very good reason for that.

A staple of the PlayStation lineup since 2002, the irreverent series of action platformers about a humanoid space lion (or “Lombax”) and his robot sidekick has often been used as an inviting welcome mat to a new generation of console or handheld gaming. In other words, Ratchet and Clank have become the closest thing that Sony has to its own Mario and Luigi: a family-friendly team of mascots whose old-school adventures can be tweaked to showcase fresh technology. The sly grin and eye-popping cartoon graphics of a “Ratchet & Clank” game reassures people that there’s still a lot of future left in their nostalgia. It says: “Video games are mutating in all sorts of unpredictable directions and evolving at a rate that seems almost cosmically unsafe, but the pure sense of fun they used to give you isn’t going anywhere.” It says, in the gentlest terms possible: “Nobody knows where this industry is going, but we promise there will always be room for what you love about it on the journey there.”

Video games may be more varied and experimental now than they’ve been at any point in the past, but — for better and worse — the promise that console gaming as we know it will still exist tomorrow has never felt shakier than it does today. Over the last decade, the “Ratchet & Clank” franchise has become an ironic emblem of that uncertainty. After releasing too many installments in too small a window, Insomniac’s vision for the series appeared to stall out by the time it premiered on the PS4; released alongside a wretched companion movie, 2016’s “Ratchet & Clank” re-imagined the original game in a way that seemed like a creative stalemate. Players were left with the impression that the Lombax and his little metal buddy had gone as far as they could go, and were ready to retire to the Hall of Heroes unless someone was able to reinvigorate them with the kind of visionary moonshot that Miyamoto Shigeru has frequently used to save Mario from certain death.

Insomniac decided to go in another direction. The opposite direction. Rather than reinvent “Ratchet & Clank” for the PS5 and future-proof it against the seemingly infinite number of new dimensions that have have rippled through modern gaming, the Sony-acquired studio invested its considerable resources into an intergalactic adventure about Ratchet and Clank’s fight to save the only reality they’ve ever known. The result is a relentless and unambiguously next-gen experience in which players jump, fly, grapple, rail-grind, and slug-ride (really fast) through the very fabric of space-time in a do-or-die effort to prove that the future doesn’t have to come at the expense of the past. That parallel worlds can co-exist, and potentially even save each other. It’s a mission that “Rift Apart” manages to accomplish by the end of its 13-hour (or so) journey, though not without encountering some curious wrinkles along the way.

“Rift Apart” opens in telling fashion: With Ratchet and Clank being honored as part of a massive parade celebrating their years of service (and showing off the PS5’s horsepower with a glimpse of the busy spectacle that will come to define the game’s hyper-stimulating environments). In effect, it’s a retirement party. And lest franchise newcomers fail to understand the implications, Ratchet’s in-game bio spells it out: “After spending so much time in retirement, he has begun to wonder — does he still have what it takes to become a hero?”

Players barely have a chance to answer that question before the universe butts in to ask it in more urgent terms. It seems that some old Lombax tech called the Dimensionator has started to malfunction, causing inter-dimensional rifts to open at random. Separated on different sides of a portal, Ratchet and Clank are forced to partner with new allies to sew the world back together and stop longtime series nemesis Dr. Nefarious (who’s obviously involved in this mess somehow) from whatever evil shenanigans he’s scheming.

While the storytelling becomes a bit more nuanced than that premise might suggest — and the game is absolutely stuffed with callbacks and amusing moments of fan service — it should go without saying that “Ratchet & Clank” neophytes will be able to dive right in without missing a beat. It helps that the plot’s most crucial supporting characters are both new to the saga: Rivet is a semi-bionic, periwinkle-colored Lombax with a loner streak and a learned distrust towards robots, and so it takes some time for she and Clank to warm up to each other when they wind up in the same dimension. Kit, meanwhile, is the adorable Clank-sized robot who Ratchet winds up lugging around on his back, though she’s got a big secret underneath her two metal pigtails. Players switch between the teams depending on the level they choose to play (“Rift Apart” begins on a linear path before branching out), though Ratchet and Rivet control almost identically and share the same weapons between them. In classic series fashion, the game makes an amusingly tongue-in-cheek effort to explain the logistics of that before encouraging you not to think about it that hard.

To a much greater degree than any previous “Ratchet & Clank” installment, the big selling point in “Rift Apart” is raw spectacle. The third-person action will be instantly familiar to just about anyone who’s played a video game in the last 20 years: You strafe, you jump, you shoot things with an ever-expanding arsenal of ridiculous guns (favorites this time around include a sentient fungus, a projectile mega-drill, and a “Topiary Sprinkler” that essentially turns enemies into the grassy chimeras from “Annihilation”). While Ratchet has a few new moves up his leather gloves — a matter-phasing dash being far and away the most useful — odds are that most people will spend less time looking at the ray-traced flawlessness of their various avatars than they will at the vibrant and dynamic environments around them. 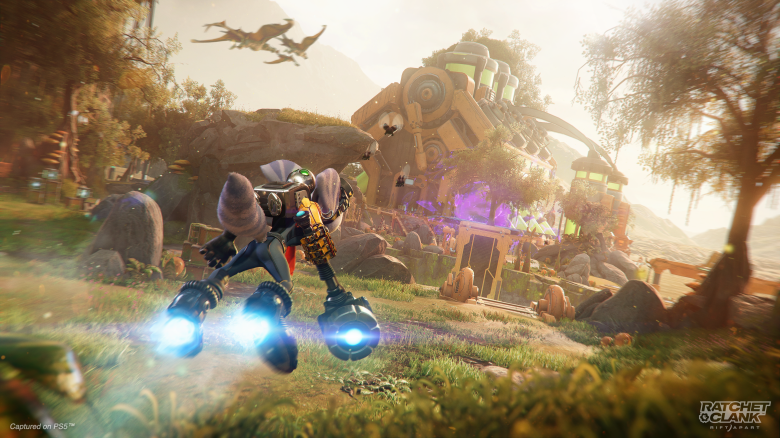 While none of the game’s subsequent levels are quite able to compete with the wow factor of the neon cityscape you shoot through at the start — an environment teeming with life in a game that spends the brunt of its time in desolate ruins and other rather sparsely populated worlds — each of its nine planets are visual marvels unto themselves, complete with rich atmospheres that offer a previously impossible degree of scale and immersion. But the real strength of the level design in “Rift Apart” isn’t size or draw-in distance so much as a palpable sense of interdimensional flow, as Insomniac has used the PS5 hardware to fold spaces on top of each other in a way that lets you move between parallel realities with such technical seamlessness and narrative ingenuity that it feels like controlling a Pixar-worthy Saturday morning cartoon.

The “Rift Tether” that allows players to warp across the screen is a gimmicky, small-potatoes way of reminding you of what Sony’s new system can do without stuttering (the game defaults to a crisp 30fps with ray-tracing, though a lower-res 60fps mode is available for people looking for a less filmic presentation), but the tech is much easier to appreciate on a macro scale. Consider the game’s best level: Ratchet and Kit visit a sunken laboratory on a planet so creepy that it almost feels like you warped into “Resident Evil Village” by mistake. It’s clear that something went very wrong here before our heroes showed up. You meet a skittish but friendly bot who keeps talking about his best friend “Juice,” and it doesn’t take very long to realize that, um, the Juice is loose. And hungry for blood.

Over the course of the 30-45 minutes that follow, players hop between dimensions as they visit two very different versions of the same physical space in an effort to accomplish their goal without getting eaten. By the time you get back to your spaceship and jet off somewhere else, the dynamic between the parallel realities on this waterlogged planet has become palpable — not just spatially or through the detailed haptic feedback the DualSense controller pumps through your fingertips, but emotionally as well. While the level does precious little to rewrite the basic rules of a platform actioner, it uses new tech to refurbish the contours of an old genre. As a result, the game’s most literal moment of “been there, done that” energy is infused with a hint of the ground-breaking spirit that made landmarks such as “Sonic Adventure” and “Super Mario Galaxy” feel like quantum leaps.

“Rift Apart” is always on the lookout for similar opportunities to push the needle forward or sideways, to the point that the game often struggles to find a status quo or any kind of sustainable rhythm. The pace is fast and the variety is so relentless that you’re seldom doing the same action for long enough to sink into a groove. One minute you’re rail-grinding circles around a giant mech who’s having an existential crisis, and the next you’re blasting your way through a decrepit pirate theme park or rocket-skating across a desert at 100mph in a level so large that “Rift Apart” briefly assumes the feel of an open-world game. A handful of skippable puzzle sequences interrupt the action even further; the Clank levels are more clever than the nauseating game in which players control a Tachikoma-like robot as it defrags a computer virus, but both tend to stop any momentum in its tracks.

For an action title with so many delightful ways of killing things — each gun more enjoyable than the last, and even better when combined into symphonies of comic mayhem — it’s strange that players are seldom given a chance to unleash their arsenal on waves of enemies outside of the limited challenges in the battle arena. The bosses look spectacular and offer small pockets of bullet-hell fun, but fighting the same baddies over and over becomes a hassle; it detracts from their oodles of unique personality (we stan the Goons-4-Less lizard henchmen), and contributes to the feeling of “Rift Apart” being more of a staggeringly impressive technical showcase than anything else.

This is one of the busiest platformers ever made, a game so over-eager to keep you on your toes and revitalize tired play mechanics for a next-gen world that it sometimes distances players from the same classic fun it’s fighting so hard to preserve. While “Rift Apart” is ecstatic proof that Ratchet still has what it takes to be a hero, it works so hard to argue that gaming’s past can exist alongside its future that the present can sometimes get lost in the shuffle along the way.

“Ratchet & Clank: Rift Apart” will be available for the PlayStation 5 on Friday, June 11. This review was based off code provided by Sony.