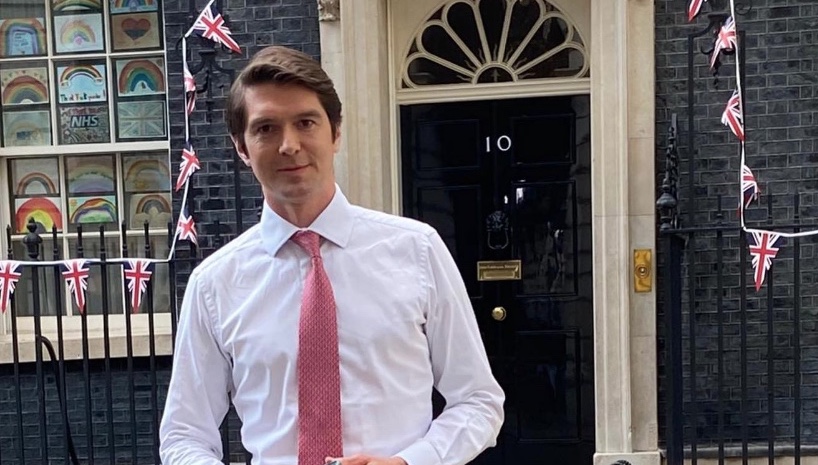 Fox News reporter Benjamin Hall has provided an update on his health after being injured in an attack in Ukraine that killed two of his colleagues, saying he feels ‘lucky to be here’.

Last month, cameraman Pierre Zakrzewski, 55, and journalist Oleksandra Kuvshynova, 24, were killed in Horenka, about 12 miles outside of the Ukrainian capital Kyiv, while reporting on the Russian invasion for Fox News.

Hall, 39, the state department correspondent for the news channel, was hospitalised after being wounded in the incident.

In new updates shared on Twitter that have since been deleted, Hall said: ‘To sum it up, I’ve lost half a leg on one side and a foot on the other.’

‘One hand is being put together, one eye is no longer working, and my hearing is pretty blown… but all in all I feel pretty damn lucky to be here – and it is the people who got me here who are amazing!’ he said according to Sky News, in the tweet that can no longer be viewed on the social media platform.

The reporter also paid tribute to his late colleagues, writing in another now-deleted tweet: ‘It’s been over three weeks since the attack in Ukraine and I wanted to start sharing it all.

‘But first I need to pay tribute to my colleagues Pierre and Sasha who didn’t make it that day. Pierre and I travelled the world together, working was his joy and his joy was infectious. RIP.’

In the tweet with the update about his health, Hall shared a picture of himself sitting in a hospital bed wearing an eye patch and bandages.

Following the news of Zakrzewski and Kuvshynova’s deaths, Fox News CEO Suzanne Scott said it was a ‘heartbreaking day’ for the organisation.

‘Pierre was a war zone photographer who covered nearly every international story for Fox News from Iraq to Afghanistan to Syria during his long tenure with us,’ she said, saying that his ‘passion and talent as a journalist were unmatched’.

Kuvshynova, who was also known as Sasha, was a Ukrainian producer working as a consultant for Fox News.

‘She was helping our crews navigate Kyiv and the surrounding area while gathering information and speaking to sources,’ Scott said, dubbing her ‘funny, brave, hard-working and kind’.

‘She was incredibly talented and spent weeks working directly with our entire team there, operating around the clock to make sure the world knew what was happening in her country.’

Tributes poured in for Zakrzewski and Kuvshynova, with Sky News’ Chief Correspondent, Stuart Ramsay, writing: ‘This week gets worse and worse. RIP Pierre and Oleksandra . My heart is breaking.

‘Love you Pierre. All those years on the road, so many memories. I’m completely floored by this news. To everyone in Ukraine to the journos in Ukraine. Keep going.’

Hall, who is a dual US-UK citizen, joined Fox News in 2015 and has been heavily involved in the network’s foreign affairs coverage.

He has covered several wars from the frontlines through his work on the US channel, including in parts of the Middle East.