The parents are laid to rest in a New Jersey cemetery, and Teresa often shares snaps of the plots. 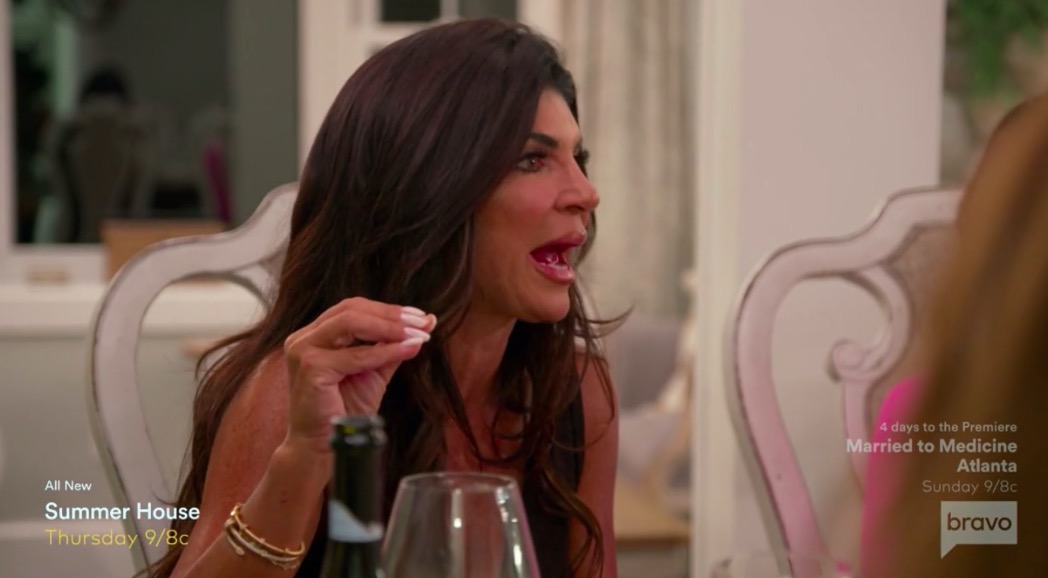 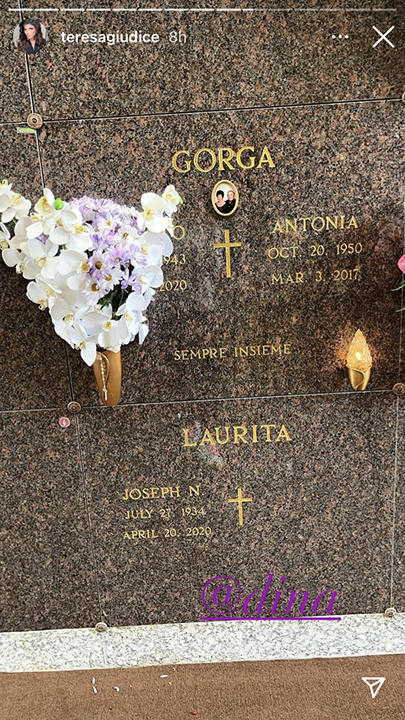 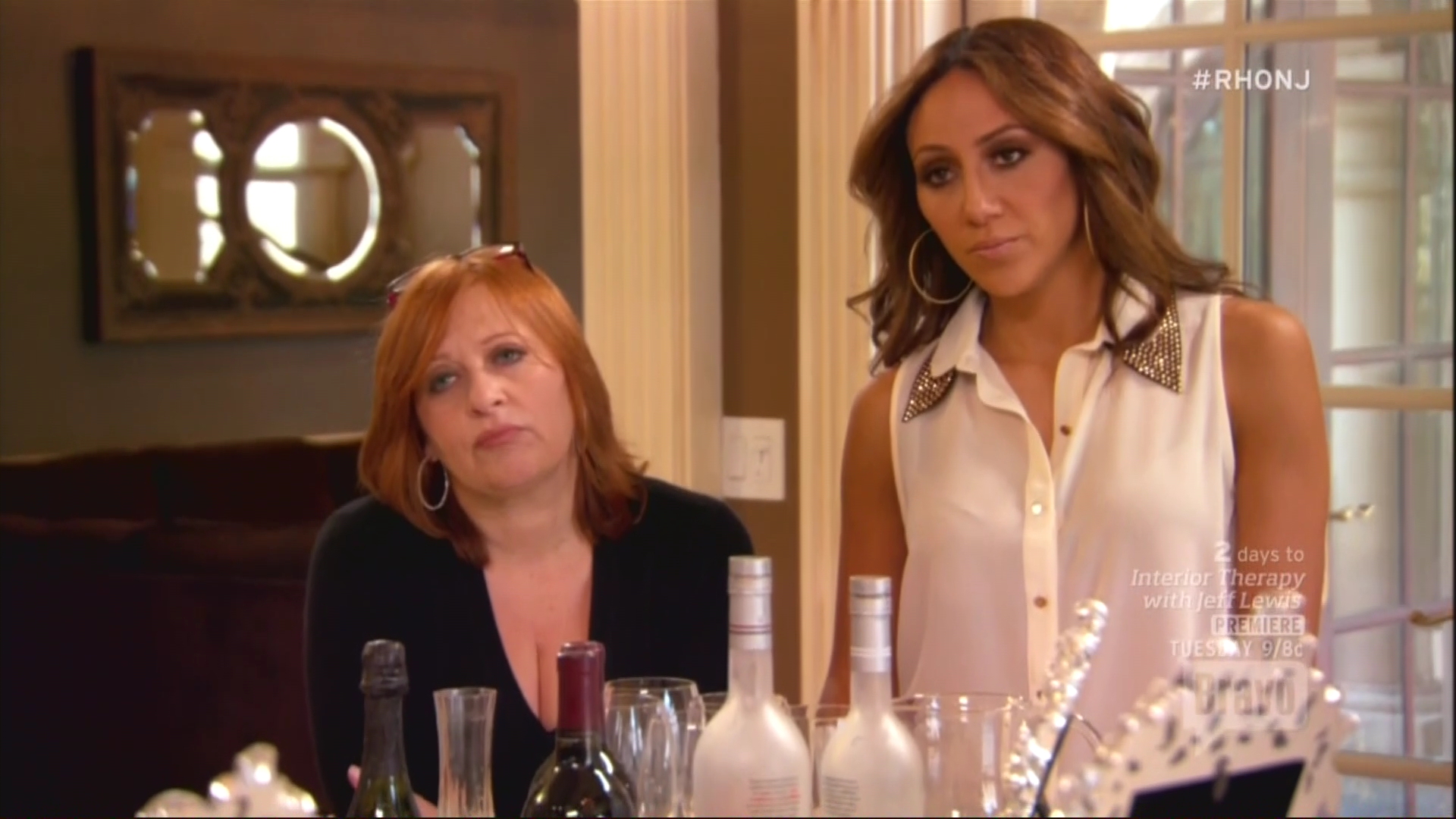 Yesterday, Teresa posted pictures of her mother's, Antonia, mausoleum plot on the fourth anniversary of her passing.

Her mother and father, Giacinto, are laid to rest in a cemetery near her New Jersey home.

The fancy crypts appear to be made of granite and have their names in gold lettering.

It was decorated with white lilies and lavender daisies and adorned with a lit candle to commemorate the anniversary of her death.

Her father, Giacinto Gorga, passed away this past April at age 76, from chronic obtrusive pulmonary disease and heart problems, and her mother, Antonia, passed away at age 66 from pneumonia in March 2017. 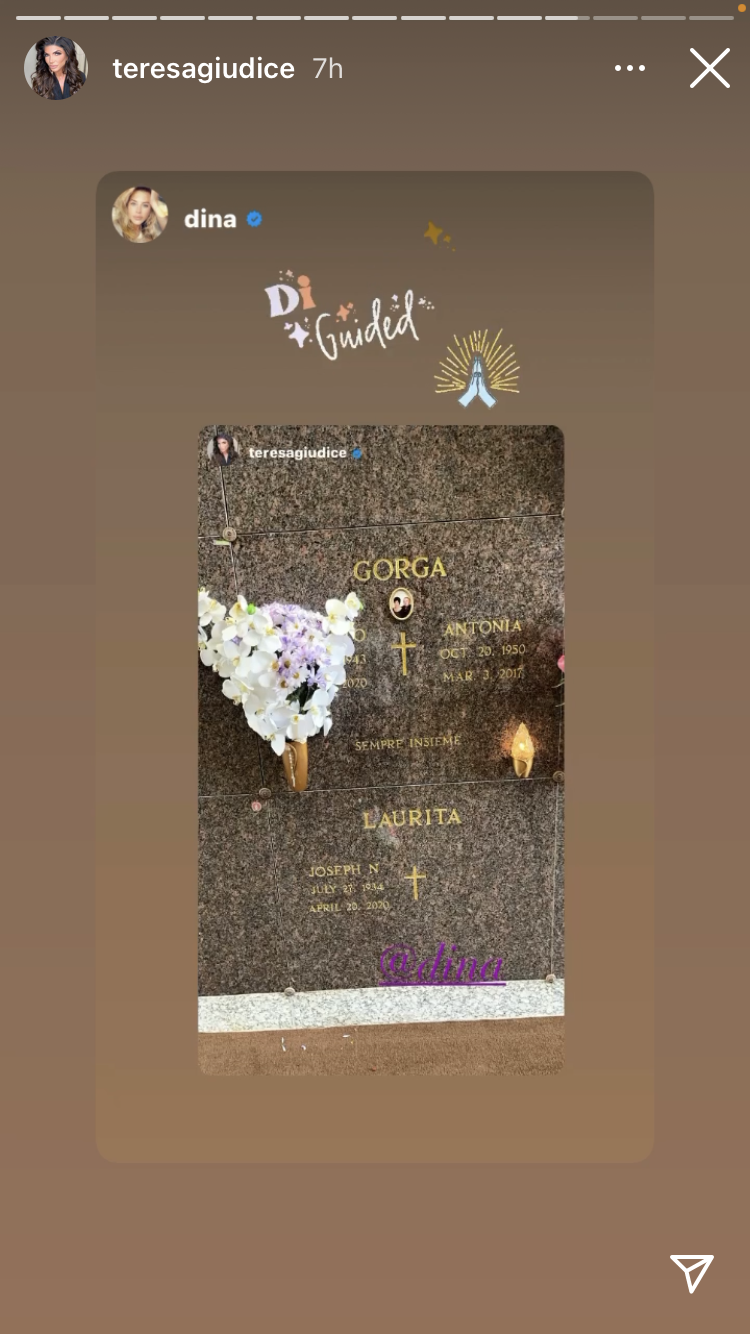 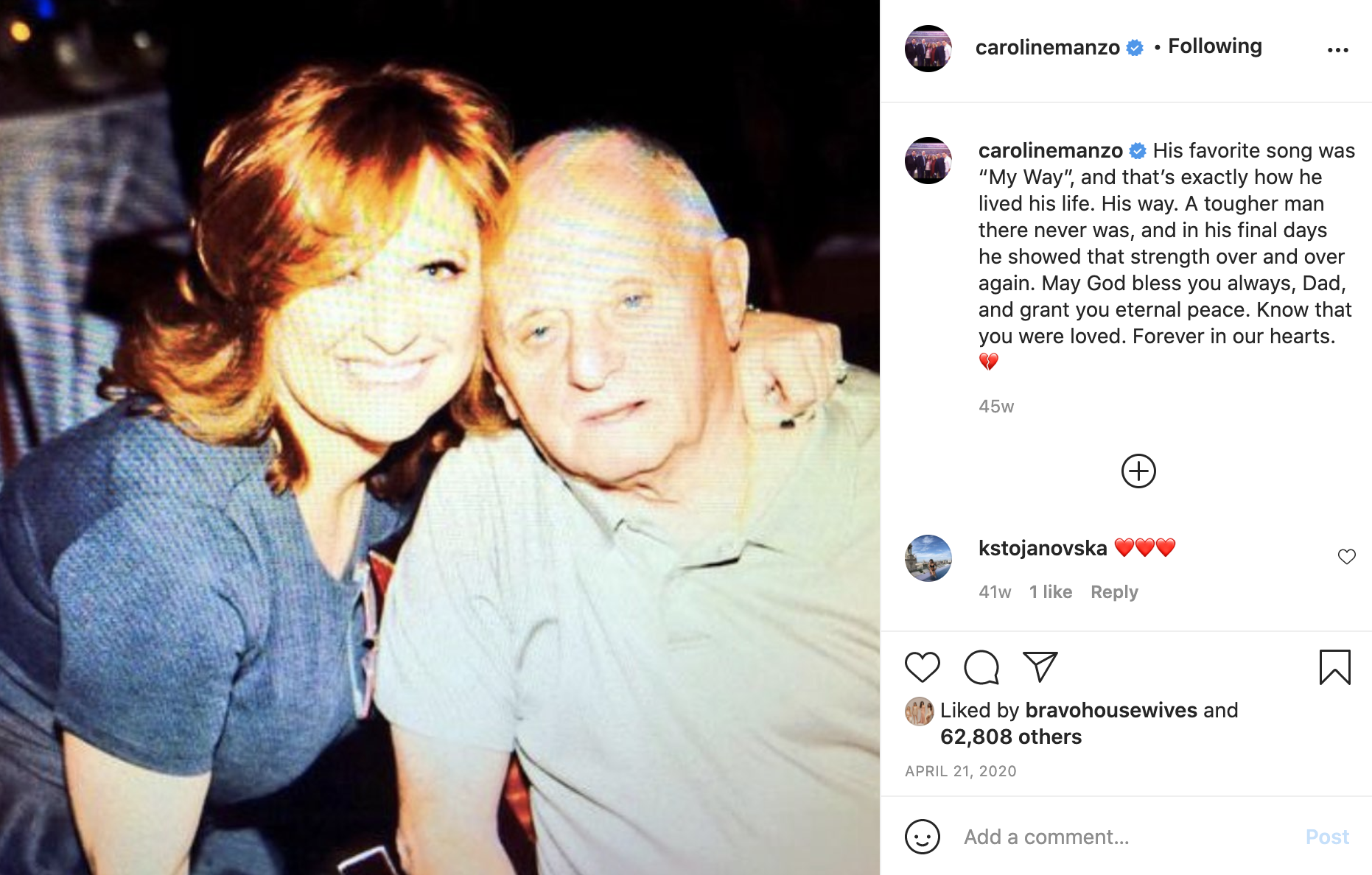 Directly under the Gorga plots is that of Joseph Laurita, the father of former RHONJ cast member sisters, Carolina and Dina Manzo.

At the time of his death, Dina posted on Instagram: "I'll love you forever and always Daddy. You can rest now 4.20.20."

Carolina also posted on social media: "His favorite song was "My Way" and that's exactly how he lived his life. His way. A tougher man there never was, and in his final days, he showed that strength over and over again. May God bless you always, Dad, and grant you eternal peace. Know that you were loved. Forever in our hearts." 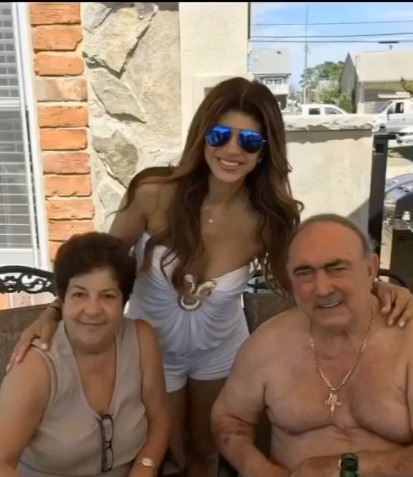 Yesterday, when Teresa posted the pic of her mother's plot, she tagged her friend, Dina, in the pic, as if to show she was visiting her father as well.

Teresa shared a pic of her mother's grave to celebrate her birthday in October, and she also snapped a yellow marker for Joseph's Laurita's crypt. 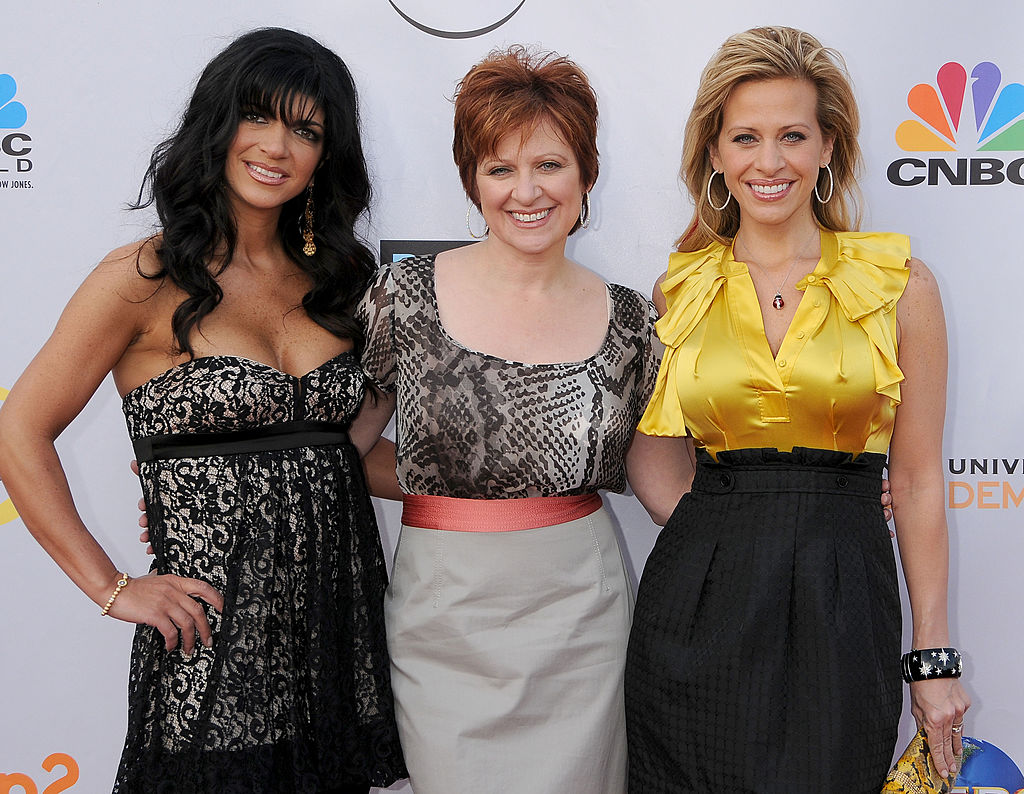 Despite the Gorga's being buried next to Joseph Laurita in the same mausoleum, Caroline and Teresa have not gotten along for years, and she is estranged from her younger sister, Dina.

Caroline left RHONJ after season five, but she and Teresa appeared in a Superbowl commercial last year.

She said on Life After Bravo that when they shot the commercial, they talked about their issues.

Teresa claimed Carolina not standing up for her during her former feud with her sister-in-law, Melissa, hurt their relationship. 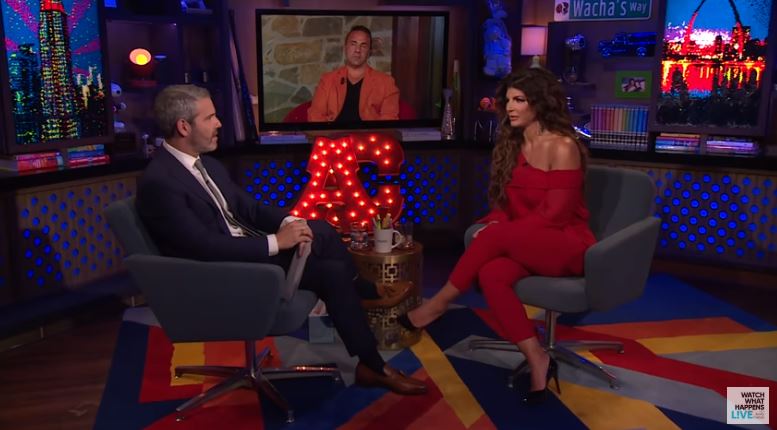 In a Fall 2019 interview with Andy Cohen Teresa also accused Carolina of being responsible for her and her now ex-husband, Joe, serving time in prison for fraud sentences.

"How could she predict that [we were headed for legal trouble]? Could she have anything to do with what happened to Joe and I? Is she a rat?”

Carolina responded to the rat accusations on her son’s podcast, Dear Albie, saying: “It’s not even worth me responding to, of course not. First of all, I had no knowledge of anything they’ve ever done in their life, you know?

"At the time, Teresa had had an abundance of legal issues and it was all over the press, and the writing was on the wall that something was going to happen because the indictment was so big. So you don’t need to be a rocket scientist to figure it out.” 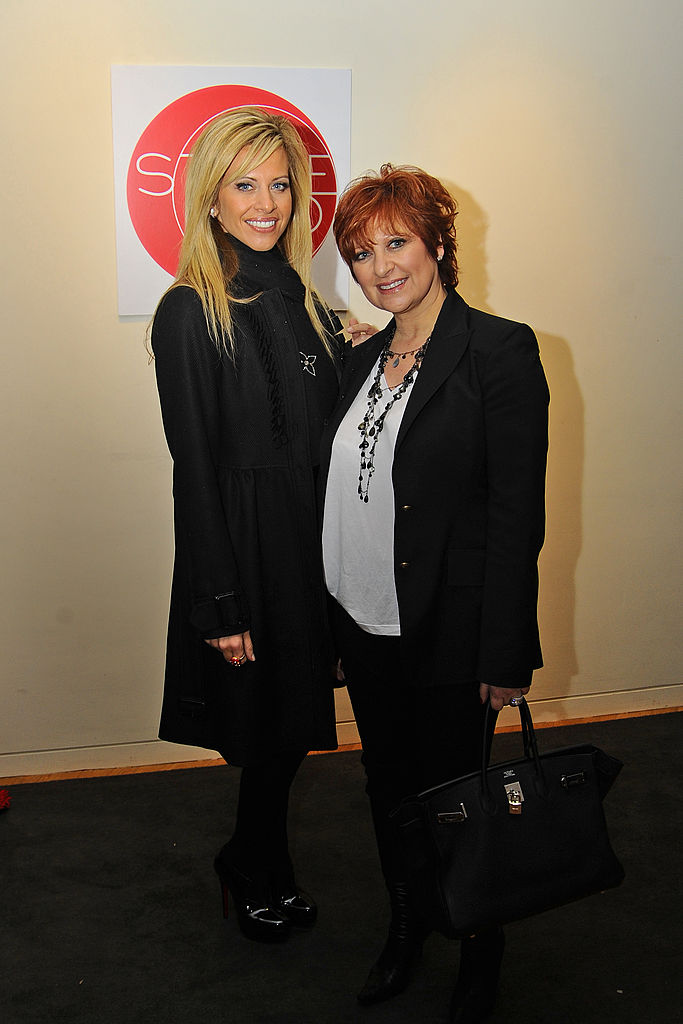 Caroline and her youngest sister, Dina, have also been estranged for the last few years.

Dina told Jeff Lewis Live in August 2018 of the falling out with her sister. “I’ll be honest with you. I think what happened was, you know, there’s always some competition in families, so everyone loved when I was like the poor sister when I was working my a*s off or whatever.

“Although she encouraged me dating her brother-in-law [Dina’s ex-husband Tommy Manzo], I don’t think she loved it too much when I kinda came to her level, as far as like ‘I have a range rover, I got a house in Franklin Lakes,’ so I think that’s where it started.”

She also said at the time she and Carolina hadn't spoken in two years. 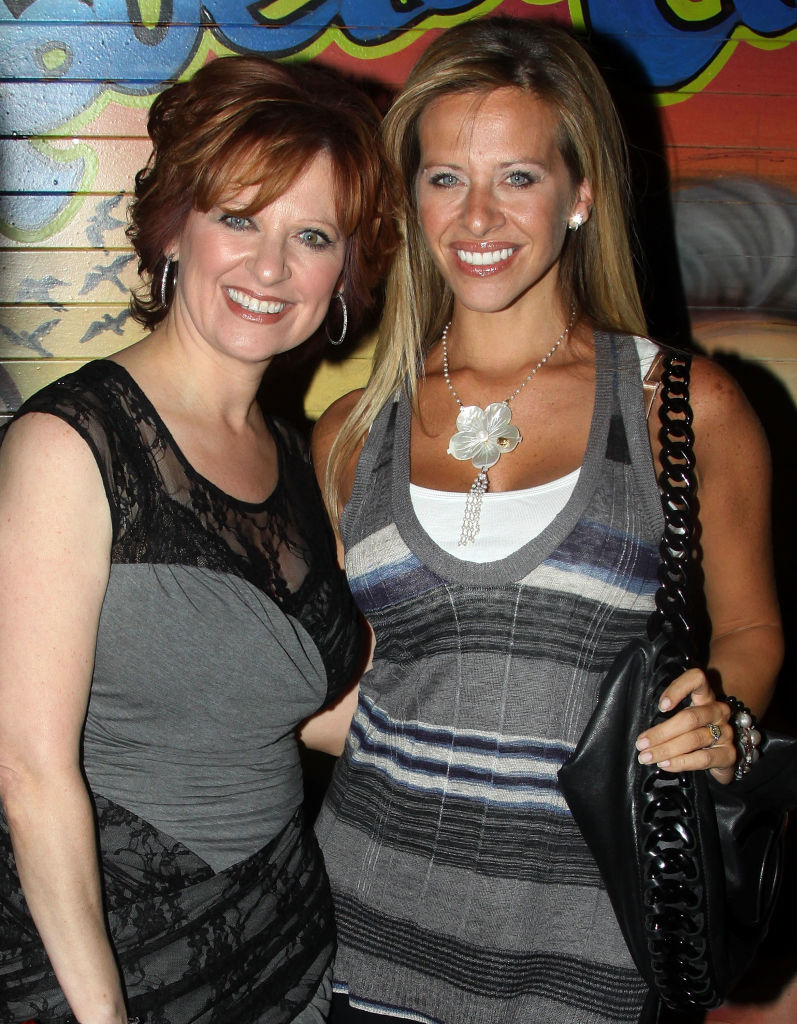 Over the summer Caroline said her family was "heartbroken" after her brother-in-law Tommy was charged with "plotting to attack his ex-wife's Dina’s new husband," Dave Cantin.

In 2015 Carolina's brother-in-law, Tommy allegedly plotted the assault against Dina when she and her now-husband Dave Cantin were dating.

Caroline told Extra TV: "We are heartbroken. This is family on both sides. I want to know the truth and my allegiance will lie with the truth."

"We don't run from things like this, we address them, and I feel comfortable with that because we are being painted with a brush that does not reflect who we are as people."

Caroline has been married to Albert Manzo, Tommy Manzo's brother, for more than three deades.

The brothers are also co-owners in their local Brownstone event hall.

Tommy and Dina divorced in 2012 after seven years of marriage. 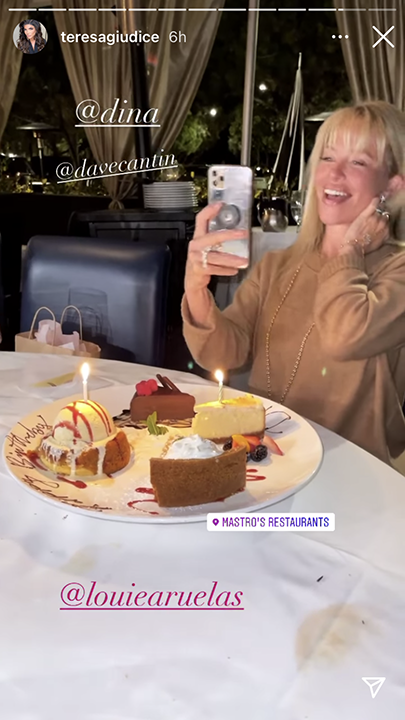 However, although Dina and Caroline are distant, she and Teresa are very close.

While Dina now lives in California, she and Teresa still see each other.

Following their legal troubles, the former couple announced their plans to divorce in December 2019.