Rose an absolute inspiration, moves the conversation around deaf people and music 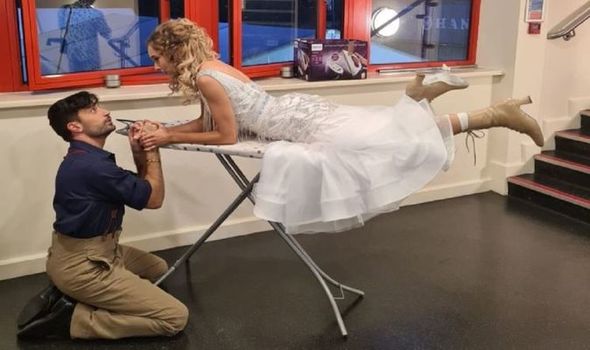 And the Italian joked that it is just as well – as EastEnders star Rose, 26, and her interpreter are struggling with his accent. Giovanni, 31, said: “Working with Rose has been just incredible. She’s an absolute inspiration to me and also for so many in the deaf community and beyond. “She’s making history as the first deaf person to compete on Strictly – what an achievement. What a brave thing to do.

“It’s about the dancing but the show is so much more and that’s what Rose represents. Hearing is a difference but we are not letting it stop us from progressing each week. Rose is so determined to keep pushing herself.”

The duo, above, will dance to Alicia Keys’ romantic song Fallin’ on tonight’s show. It comes after viewers saw Giovanni show off his beginner’s signing last weekend.But he revealed his strong accent was causing issues.

Giovanni said: “Of course, being Italian and having different pronunciation can be tricky but we have a laugh. “Rose’s interpreter has been amazing and between us we make a great team.

“This has really opened my eyes into Rose’s world and the deaf community. I’ve been learning sign language. It’s important to put in that effort for Rose, the same way she is putting in effort for me. Learning the sign for ‘again, again’ as she practises has been very useful – and pretty funny.”

They are the favourites to win this year’s show, with odds of 6-4 from bookmaker Coral. Rose previously said she was “proud to be smashing the stigma around deaf people” and hopes viewers realise “it’s a normal thing” for the deaf to enjoy music.

She added: “What I really want while I’m in this show is that the conversation around deaf people with music will move on.” Giovanni said it was an “honour to be Rose’s partner and experience this journey with her”. He added: “She’s a great role model, a hard-worker and a true professional.

Giovanni has yet to lift the Glitterball trophy in seven years on Strictly. He has made it to the final three times, with Coronation Street actress Georgia May Foote in 2015, with Debbie McGee, the late magician Paul Daniel’s wife and assistant, in 2017 and Steps singer Faye Tozer in 2018.