Where most shows of the pre-streaming era poured time and resources into year-end episodes and Christmas specials, for “Sabrina the Teenage Witch,” everything went into Halloween. As producer and star Melissa Joan Hart told IndieWire via Zoom, “Of the 26 [episodes] we would do that year, Halloween was always the biggie. That’s when the budget would open up and we’d spend a lot of money on it.”

The proof is in the petrifying pudding, with “Sabrina” creating some of the most unique, inventive, and memorable Halloween episodes of the 1990s. Whether it was alt-rock band 10,000 Maniacs performing during Season 2’s “A River of Candy Corn Runs Through It” or Sabrina giving Frankenstein’s monster and the Bride of Frankenstein couple’s counseling in Season 5’s “The Halloween Scene,” these episodes showcased not only a blend of spooky fun for the whole family, but also an uptick in star power and IP recognition.

Take Season 3’s “Good Will Haunting”: the witchy sitcom’s (arguably best) All Hallow’s Eve special from 1998, which follows Sabrina on Halloween night after she invites some friends over to watch movies. Suddenly, Sabrina’s up against not only a dearth of horror titles at the video store, but also a magical doll named Molly Dolly who is threatening to “get her” and her pals. The episode wears its inspirations on its sleeve. Writers Carrie Honigblum and Renee Phillips told IndieWire they intentionally opened the episode with Sabrina’s cat, Salem, introducing the night’s events in the style of famed sci-fi host Rod Serling because the “Twilight Zone” episode “Living Doll” inspired Molly Dolly herself.

The episode sees Sabrina (Hart) receiving a present from her unknown Aunt Beulah. The doll, as Beulah says in her note, is meant to be a fun Halloween treat. It also forces Sabrina’s aunts Hilda (Caroline Rhea) and Zelda (Beth Broderick) to realize they’ve avoided Beulah’s Halloween parties for centuries and that they should probably make an appearance.

With Sabrina alone in the house, the typical teen hijinks of Halloween parties gone awry goes to extremes. Molly Dolly isn’t just threatening to harm Sabrina throughout the evening, she’s bringing all manner of monsters and ghouls to ruin the night. To look at Molly Dolly herself, the juxtaposition of the sweet and innocent doll with the evil that comes out of her mouth is what brings the terror, and that’s courtesy of voice actress Tara Strong.

Today, Strong is the voice behind Miss Minutes from Marvel’s “Loki,” but her roots in the Sabrina universe run deep, starting with her appearance in the 1998 TV movie “Sabrina Goes to Rome.”

“[The producers] knew about my voiceover career,” Strong told IndieWire. “They knew they wanted Molly Dolly to sound like a young girl, but dangerous, which is something I’m kind of famous for.” To get into character Strong analyzed the character description and collaborated with the production to tweak things. “The voice has to be cute, and the deviant side comes from the dialogue. What’s the action? What’s happening around you?” Strong said.

Unlike most voiceover performances that generally take place in a sound booth and are added in post, Strong said she was present on set, hiding under tables alongside the puppeteers who brought Salem and, in this case, Molly to life. Strong didn’t have a ton of puppeteering experience but was able to work with Mauri Bernstein to help pull the strings on Molly. In scenes where Molly had to be physical, such as in a wrestling match with Sabrina, Strong recorded off-stage with a boom mic as her lines were piped in. 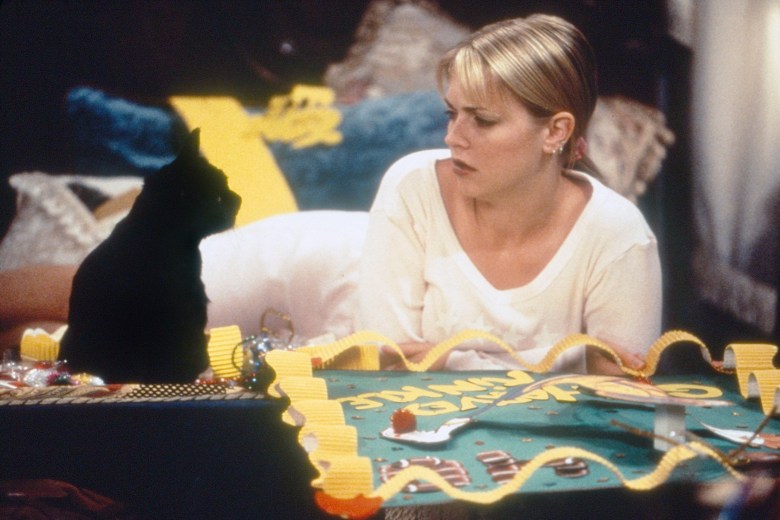 As Hart and the writers note, it wasn’t unusual to have a set filled with people hiding under tables or in sofas. Hart said she’d often talk to the puppeteers under the table or “remember that when you sit down on the couch, don’t smash the couch because Mauri’s under there.”

The show boasted writers from all walks of the comedy and television world, such as “Mystery Science Theater” star Frank Conniff. Part of what makes “Good Will Haunting” such an amazing episode is how funny it is. Hart acknowledged that, while she was a producer on the series, the writers were given free rein to do what they wanted with the episodes, albeit so long as it made sense within Sabrina’s world. “

There was one time I could think of when we had an issue where I was like, ‘I can’t do this episode. It doesn’t make sense to me,’ and it was not this episode,” said Hart. But with that freedom came an ability to tell stories aimed at adults as often those aimed at kids.

Some of the best jokes of “Good Will Haunting” are a combination of great writing and Hart’s delivery (including gems such as  “We’ll never live to see ‘Enchanted April’” and ”Clint Eastwood just took off his shirt” — which are funny in and out of context.) 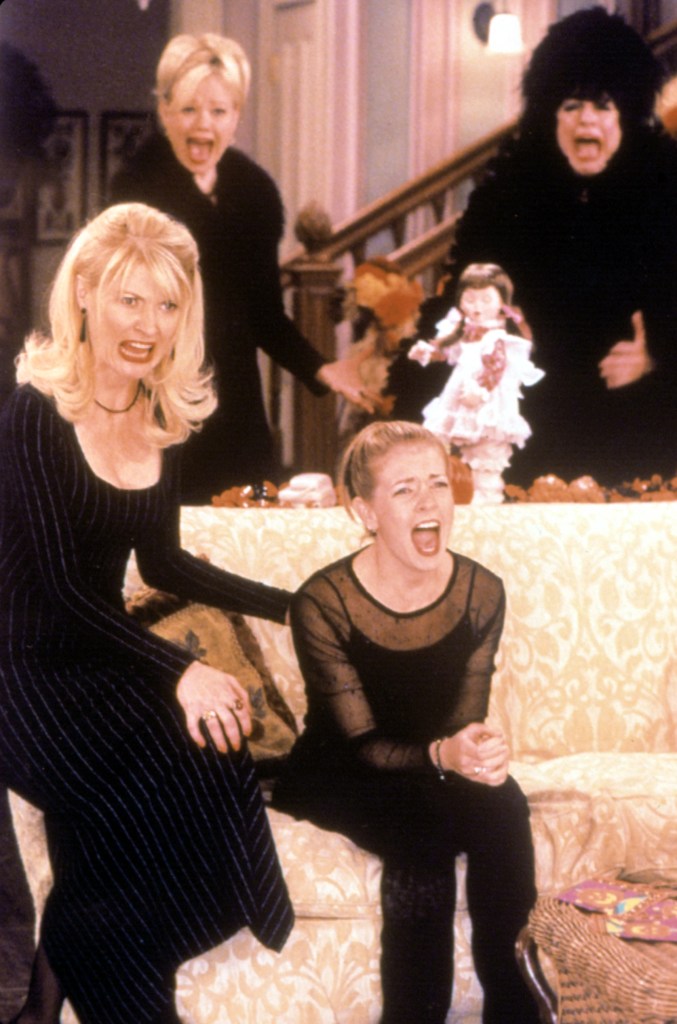 Phillips points out that the reference to Eastwood’s 1995 feature “The Bridges of Madison County” came from Honigblum as both were flummoxed by the adoration of the intensely sentimental romance, also starring Meryl Streep. “It made me kind of gag,” said Honigblum.

And what other show could boast a Halloween episode with a killer doll and a subplot involving Sabrina’s aunts trapped in an insane asylum with the cast of the ’60s sketch comedy “Laugh-In?” Kids won’t know the significance of seeing Joanne Worley, Ruth Buzzi, and Gary Owens — playing inmates at a mental institution — on their screen, but for fans of “Laugh-In” the nostalgia rules. The inmates of that frenetic ’60s delight are now running the asylum and trapping Hilda and Zelda within.

“I kept saying ‘children don’t just watch children,’” said Honigblum, and while the children may not know who the various classic era stars are, they will as they age.

It’s something Hart admits she didn’t treasure enough when making the series herself. didn’t appreciate them until later on in life when I learned who they really were, what their whole body of work was,” she said.

As for the Molly Dolly prop itself? Where she ended up remains a mystery. Hart said when the series ended members of the production generally took what they wanted from the set.

“On the last day we all walked around the set and just kind of stole stuff. It’d been there so long it didn’t really count as an asset anymore,” she said. But neither her, nor Honigblum or Phillips know where Molly ended up. The original Salem puppet is in the Center for Puppetry Arts in Atlanta, Georgia, but it’s unclear if Molly is there as well. (Emails sent to the Center for Puppetry Arts were unanswered at press time.) But to everyone asked it brings a smile to their faces that Molly might still be wreaking havoc somewhere.

“Sabrina the Teenage Witch” is available to stream on Paramount+.