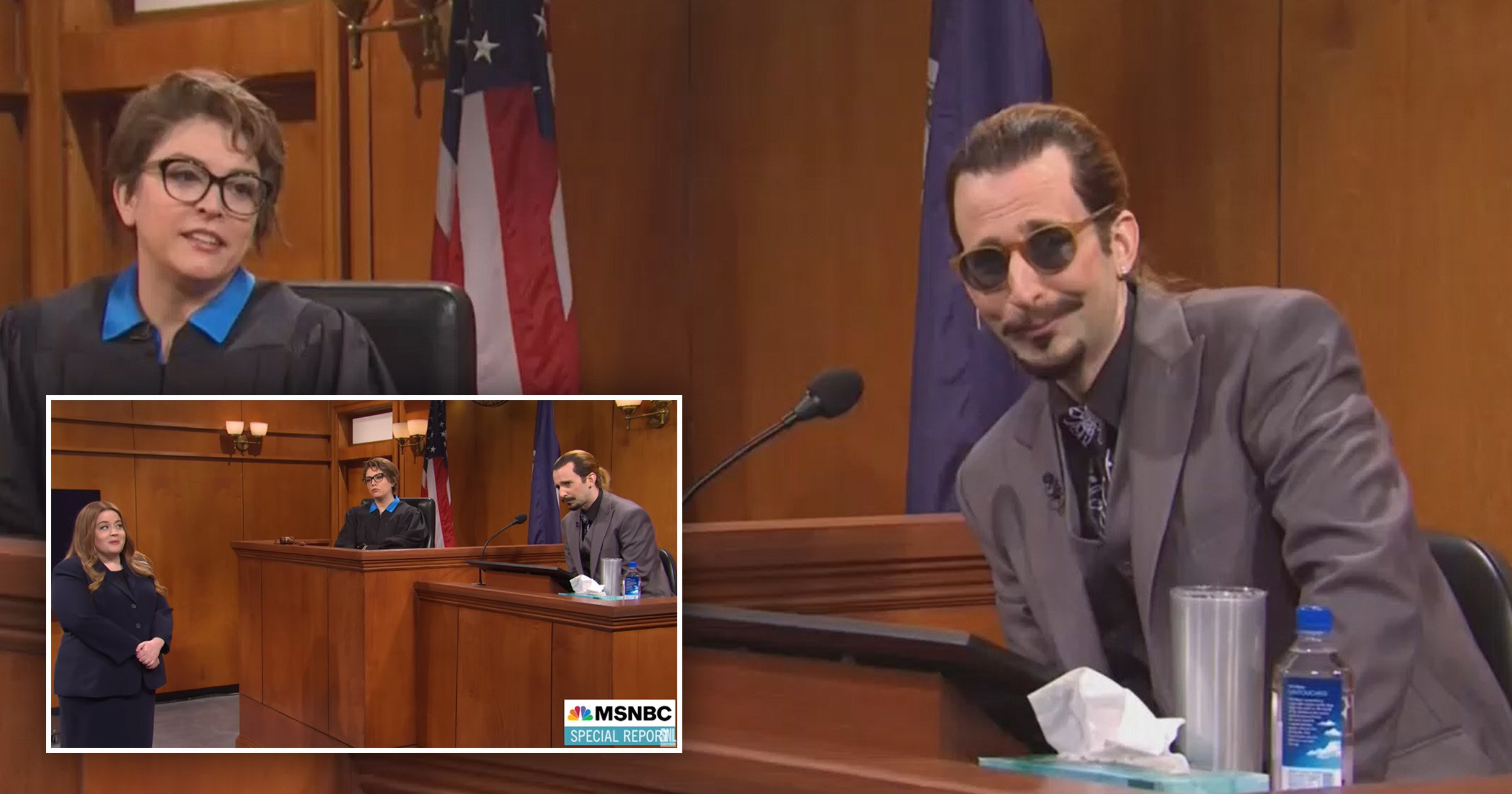 The iconic sketch show – which is known for its wild and scathing spoofs of current events – took aim at the courtroom battle between the former couple over the weekend.

In the cold open, a newsreader played by Kate McKinnon said: ‘You’re watching MSNBC news because you have nowhere else to place your anger.

‘Tonight, political fallout from the recent January 6th subpoenas, updates on the Russian helicopter taken down by Ukraine, plus a nationwide shortage of baby formula. But we start, of course, with the Johnny Depp Amber Heard cuckoo trial.

‘Look, I know it’s not the most pertinent story of the moment but with all the problems in the world, isn’t it nice to have a news story we can all collectively watch and say, “Glad it ain’t me?” I thought so.’

The skit then took viewers into the courtroom, where Kyle Mooney donned a beard, a ponytail and earrings to portray Depp.

Although Heard’s lawyer Elaine Bredehoft (Heidi Gardner) objected after a lawyer played by Aidy Bryant asked Mooney’s take on Depp what his reaction was to finding ‘faecal matter in your bed’, Cecily’s Strong’s judge didn’t agree.

She quipped: ‘It does sound fun, and this trial is for fun.’

Depp was then shown a video of his property manager – played by Kenan Thompson – discovering a ‘boo boo’ in his bed, before the likes of Ego Nwodim, Melissa Villasenor and Chris Redd appear as other members of the actor’s service staff.

They all argued over who was responsible for cleaning up the poo, while the sketch went back to the courtroom with a note from the judge.

Strong’s character said: ‘OK, I think I’ve seen enough. This trial has given me a lot to consider.

‘On one hand, I believe Mr. Depp’s story, but on the other hand, your constant smirk lets me know this is not the first woman you made so mad that she pooped in your bed.’

In the actual case, Heard returned to the stand on Monday and claimed it wasn’t her who defecated in the bed, instead blaming Depp’s dog Boo.

Asked what ‘bathroom problems’ Boo may have had, Heard answered: ‘She had eaten Johnny’s weed when she was a puppy and had bowel control issues for her entire life, among some other issues.’

In his written statement, Depp accused Heard or ‘one of her friends’ of defecating in the couple’s marital bed back in 2016. Depp claims Heard described it as a ‘harmless prank’.

A rep for Heard denied Depp’s claims at the time, insisting that accusations the actress or her friends were responsible for the defecation incident are ‘completely untrue’.

The Pirates of the Caribbean actor, 58, is suing his ex-wife for libel after she penned an op-ed in the Washington Post, with the headline: ‘I spoke up against sexual violence — and faced our culture’s wrath. That has to change’.

She discussed her experiences of domestic abuse in the 2018 article, but did not mention her former partner by name.

Despite not being named, Depp’s lawyers have said that this ‘falsely implies’ that Heard was subjected to abuse during their marriage –  the actor is seeking $50million (£39m) in damages.