“I’m sure Trump’s not our first sociopath president, but he’s definitely the first one who’s open about it,” Meyers mocked Trump in a new “A Closer Look” 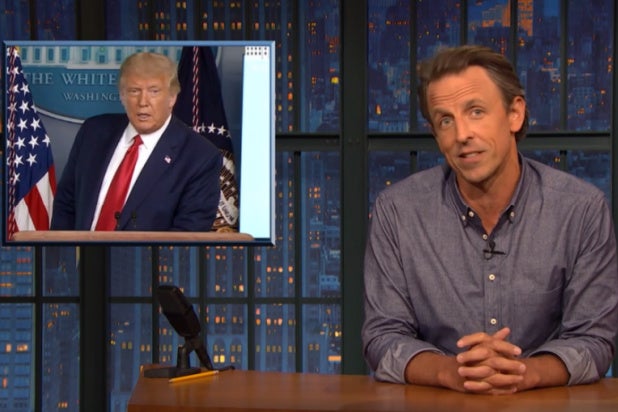 Seth Meyers typically brings a dry and sarcastic tone to his “A Closer Look” rants, but on Thursday night he briefly broke through that veneer with a moment of legitimate anger. Meyers was discussing Donald Trump’s incorrect remarks about how the United States coronavirus response would look great if you took all the blue state deaths out of the equation.

Meyers opened the segment making fun of Trump and the Republican-run federal government for wanting to use a so-called “heat ray” on peaceful protesters in Washington, D.C. “This is what happens when an unhinged political movement talks about peaceful protesters and political opponents like they’re enemies of the state,” Meyers said, before running through a number of examples of Trump and his supporters doing just that.

“This is all the culmination of an increasingly unhinged and aberrant right-wing movement that sees its political opponents as illegitimate and seeks to punish them,” Meyers said as he got to the meat of the situation. “That’s why Trump very obviously does not care what happens to people living in so-called blue states during the coronavirus pandemic. He basically said as much yesterday.”

“Late Night” then pulled up the clip of Trump going over some virus graphs and declaring that “if you take the blue states out we’re at a level that, I don’t think anybody in the world would be at, we’re really at a very low level.”

“As someone who lives in one of those states and knows people affected by this virus I would just like to say: go f— yourself, you rotting soulless business ham,” Meyers said. “But sure, if you just take out all the people that died, then you did a great job, dude. By the same token, if you take out all his albums, Kid Rock has had a fantastic career.

“This has to be one of the most grotesque things a president has ever said. I’m sure Trump’s not our first sociopath president, but he’s definitely the first one who’s open about it. He’s the kid who lights ants on fire for fun and when you catch him doing it he says, ‘It’s not what you think. Torturing living things gives me joy.’ “

For the record, Trump’s assertion that America’s coronavirus response would look good without the blue state deaths is completely false. About 47% of COVID-19 deaths in the United States have occurred in red states — more than 90,000. Which would still be the second worst total in the world, behind Brazil.

Also, since mid-July, red states have suffered more than 70% of American COVID-19 deaths. And on top of that, the pandemic has not ended yet — the University of Washington says we should expect the number of deaths to double by the end of the year.

But on the bright side, Meyers said, at least this false rhetoric makes clear how Trump views the people who live in his country, calling it  “the most honest articulation of Trump’s beliefs.”

“If you can’t empower or enrich him personally, he doesn’t care about you,” Meyers went on. “That’s the same ideology that treats protesters as traitors and calls for political opponents to be charged with sedition.

“And, by the way, the only way they can get away with this stuff is because we haven’t asked backwards electoral college system that lets Republican vampires right off anyone who doesn’t live in one of like a dozen swing states. If we had a national popular vote, Trump and the GOP would have to campaign in places like Portland or New York City, and I personally would love to see him try to pander to Portlanders by growing a mustache and riding a penny farthing to an artisanal pickle store.”

You can watch all the “A Closer Look” segment from Thursday’s episode of “Late Night With Seth Meyers” in the video embedded in this article.