If there’s one lesson Netflix learned from its runaway 2020 hit The Witcher, it’s this: In these troubled times, the viewing public is voracious for escapist fantasy television. And not just any form of the genre — the kind with big-budget effects, deep world-building, tangled romances, and labyrinthine, intertwining plots you can get blissfully lost in.

Last month, Shadow and Bone leapt into that void with arms wide open. Eric Heisserer’s series was the second most-watched show in the U.S. the weekend it debuted (behind only Disney+’s The Falcon and the Winter Soldier). Based on Leigh Bardugo’s popular YA novel series, Shadow and Bone offers a compelling blend of intrigue, romance, and action, steeped in an aesthetic that’s part steampunk, part imperial Russia. And, vitally for a genre series in a time when we’re all pretty much over grim dystopias, the show has a human heart, a rollicking pace, and an honest-to-god sense of humor.

'Game of Thrones' 10th-Anniversary Celebration to Launch on HBO Max

The United States of Weed

Shadow and Bone is set mostly in the kingdom of Ravka, a country trapped in an endless war with its neighbors, Fjerda and Shu Han. Ravka is divided into two by a dark void called the Fold, which is populated by shadowy monsters that make passing through it deadly. The kingdom’s defense against the Fold is a population of elemental magic users called Grisha. The story centers on a teenage chosen one named Alina Starkov (Jessie Mei Li). Like many protagonists, Alina is an orphan and an outcast, a humble mapmaker in the Ravkan army who gets plucked from obscurity when she unleashes a mythical power that harnesses sunlight. And, like many protagonists, she gets caught in a love triangle — between the dashing but creepy General Kirigan (Ben Barnes) and her devoted childhood best friend, Mal (Archie Renaux).

But if this storyline isn’t your speed, never fear! There’s more: In the island nation of Kerch, a trio of appealing rogues who dub themselves the Crows — Kaz (Freddy Carter), Inej (Amita Suman), and Jesper (Kit Young) — hatch a plot to cross the Fold and nab Alina to earn a small fortune from a local crime boss. Elsewhere, a Grisha named Nina (Danielle Galligan) gets kidnapped by a band of magic-despising Fjerdans and forms an unlikely bond with one of her captors (Calahan Skogman) after their ship capsizes.

This all sounds like a lot on paper, but Shadow and Bone does an impressively deft job of juggling its numerous tones and plot elements. Unlike, say, fantasy TV granddaddy Game of Thrones, you won’t find yourself needing a character key to keep track — it’s all pretty easy to absorb, even after one episode. Part of this is due to the fact that Shadow and Bone is derivative as all get-out, and the series both knows it and revels in it. The battle magic is straight out of Avatar: The Last Airbender; the love triangle feels lifted from The Hunger Games; and the exploits of the Crows are part-Firefly, part–every heist movie ever. There’s even an element of N.K. Jemisin’s Broken Earth trilogy in the way that the Grisha are both a protected class and feared pariahs. 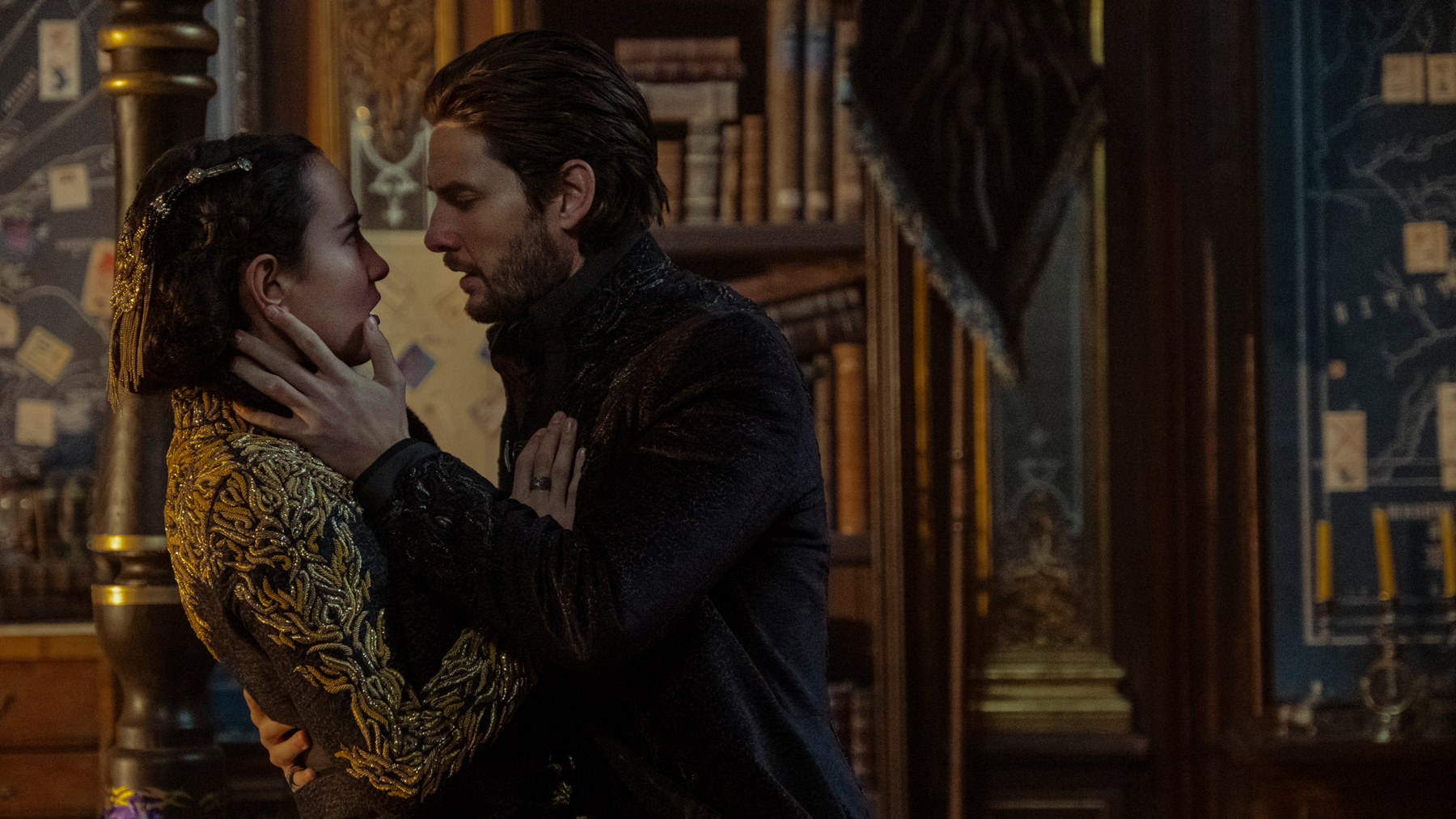 Jessie Mei Li and Ben Barnes in ‘Shadow and Bone.’

It helps that Shadow and Bone features an appealing cast, comprised of mostly newcomers. Li, who has primarily worked in theater, has the charisma and the acting chops to make us root for Alina. Fantasy vet Barnes (from The Chronicles of Narnia to Westworld) makes a meal of his role as the mysterious Kirigan. But the ones having the most fun are Carter, Suman, and Young as the Crows, whether Jesper is bedding a stablehand to pull off a heist or Inej is grappling with the moral gray areas of assassination. There’s also a very appealing goat that shows up midseason — easily the most iconic caprine actor since The Witch’s Black Phillip.

A big part of what makes the show feel like the next generation of fantasy on TV is that, unlike Thrones and Witcher, Shadow and Bone’s cast isn’t a monolith of whiteness. Considering where the genre was even a few years ago, it’s pretty significant to have an Asian British actress at the center of a major fantasy series. Racial bias is addressed in the story itself; Alina is half-Ravkan and half-Shu, and deals with her fair share of bigotry from both the powers that be and her fellow Grisha. (That said, Shadow and Bone found itself mired in controversy when a Twitter post pointed out the fact that the stunt double for Nepalese British actress Suman is, in fact, a white woman in brownface. Unfortunately, this is a pervasive problem in television; the use of white stunt doubles for actors of color has been called out multiple times recently, in shows including Stargirl, Gotham, and Lovecraft Country.)

Heisserer seems to know that viewers love a good trope, and Shadow and Bone employs as many as possible. Love a magical makeover? We’ve got lots of those. How about a scene where two enemies who are clearly into each other are forced to share one bed? Got that too. An immortal villain hiding in plain sight? He’s here for you. This series knows that its audience is savvy to the trappings of fantasy-adventure-romance, and will gladly take entertainment value over originality.

And, honestly, that doesn’t make it an unworthy show. We live in a culture that’s content to think of every joyless “prestige” series about a detective with a checkered past solving a small-town murder as high-quality Emmy bait, even though those shows are, in many ways, every bit as derivative as Shadow and Bone. But, perhaps because the audience for YA is primarily young women, we put the former genre on a pedestal and label the latter junk food. Is Shadow and Bone going to change the way you think about television? Probably not. Is it a compulsively enjoyable piece of entertainment for those of us who dig a bit of magic and palace intrigue? You bet your emotional support goat it is.