Robin Stanton-Gleaves appeared on Good Morning Britain to set the record straight about Jack’s death. The 22-year-old was killed last month when he was struck by the helicopter’s rotor blade shortly after landing on the outskirts of Athens. It was widely reported that Jack was trying to take a selfie when the tragedy struck.

However, in a new interview, Robin explained that’s not what happened at all.

As he tried to explain what really happened on that day, Richard told the guest to “get to the point” as they were running short of time.

“That’s why I want you to tell it because we’re a little bit short of time,” Richard interrupted.

“So can you get to that story then? What is it that your son told you?” 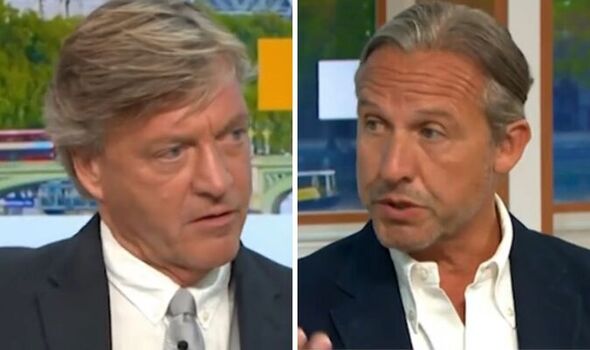 However, fans were left outraged by Richard’s comment, and many took to social media to share their thoughts.

Heather Kirkbride said: “Richard Madeley can’t believe you just said head to head to the man who you’re interviewing about his son’s friend who sadly died last month in a helicopter accident – totally inappropriate due to the nature of how he died.”

Poppy fumed: “#GMB oh sod off Richard Madeley. You’re rushing him in the most incompassionate way. Just say you’re sorry & that they don’t have much time. Not GET TO THE STORY!”

While Kaz added: “Omg Madeley talking to the friend of Jack Fenton might as well have just said ‘GET TO THE POINT’ he’s so rude.” (sic)

“#gmb’s Richard Madeley interview techniques are so uncomfortable to watch. give that man some respect – telling him ‘get to that story, we are a bit short of time’ is very insensitive,” Ella raged.

User @Kellsley tweeted: “Richard Madeley is so rude to give the poor man some respect – he has just lost his son!” (sic)