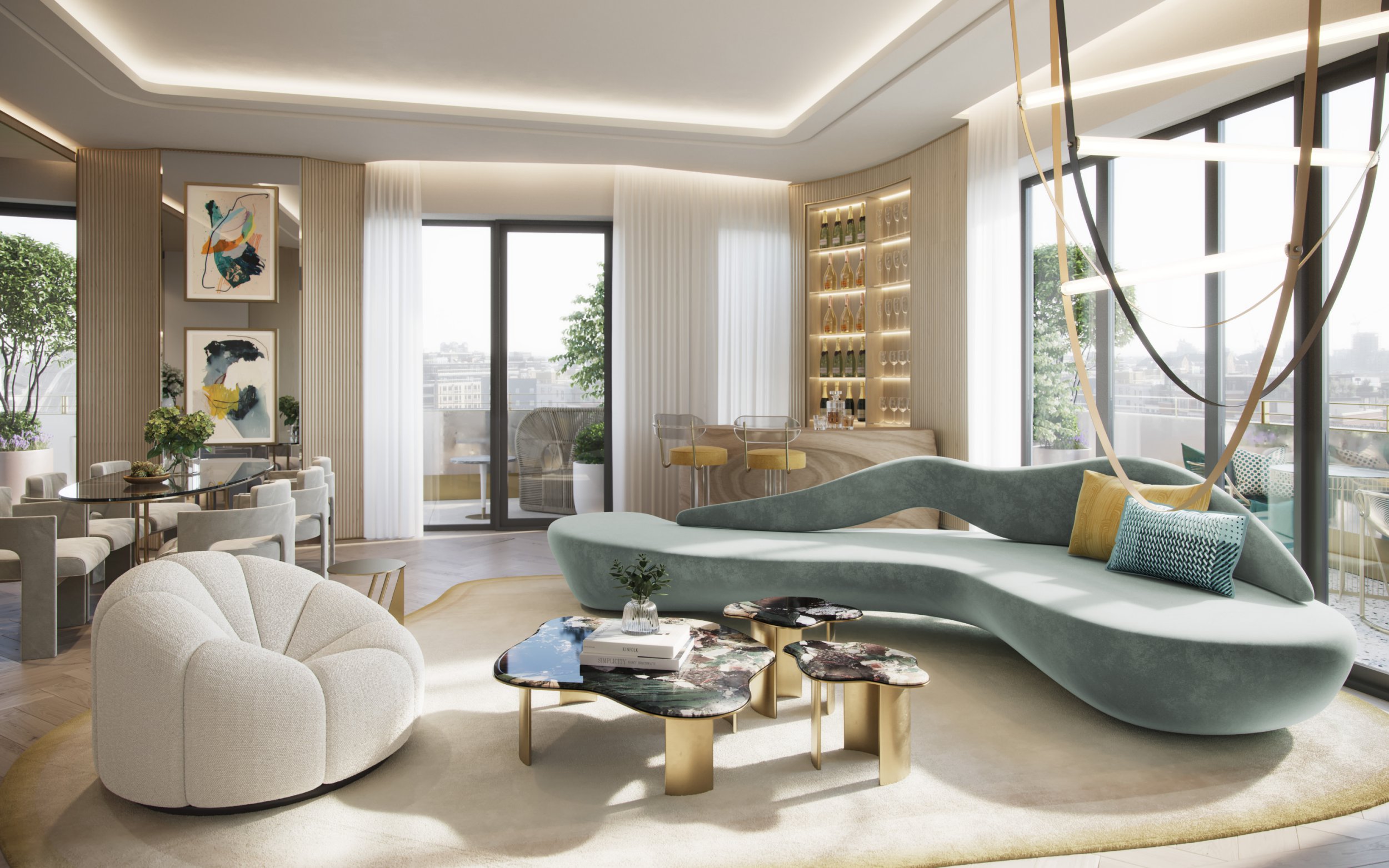 Penthouse living has long been synonymous with style and success: having the wherewithal to live centrally, but high above the hoi polloi, with views over a city you could quite justifiably regard as yours alone.

But what if one penthouse isn’t enough?

What if there are seven penthouses on the top floor, retailing for a combined £21.4million?

Surely you can’t buy them all?

Turns out you can, and someone has – purchasing the entire top deck of the TCRW Soho residential scheme off-plan, to bag what can only be described as a mega penthouse looming above London’s Oxford Street. It’s the famous shopping street’s most expensive home ever.

The buyer – described simply as an ‘Asian billionaire’ – is said to be turning the whole floor into either one or two properties.

If it becomes one residence, what a pad it will be, with more than 7,200sq ft of living space surrounded by more than 1,000sq ft of wraparound private terraces, overlooking the beating heart of London’s West End: Oxford Street’s shopping by day, Soho’s nightlife after dark.

Depending on the precise reformulation of the original plans, it could also offer up to eight VIP bedroom suites, several large reception rooms, a home cinema, library and exercise studio. Or, perhaps, pretty much whatever the buyer requests: as a tournament-standard basketball court is 4,500sq ft, there’s plenty of room for one of those, with space round the side.

The whole TCRW Soho scheme sits atop the new entrance to the Tottenham Court Road station (hence the first three initials) built to accommodate Crossrail, the huge new west-east line linking London mainline termini Paddington and Liverpool Street, not to mention destinations such as Heathrow, Reading and Shenfield via the new Elizabeth Line.

The mega penthouse will be in the other block, a six-storey art deco-inspired building facing onto Oxford Street, Britain’s most famous shopping thoroughfare. The building will add 7,989sq ft of retail below 69 apartments – or perhaps now five or six fewer.

Announced in 2019, the whole scheme was originally set for completion in summer 2022, but Covid knocked that back as part of the huge uncertainty it brought to the property market. However, in March this year, developer Gaillard Homes secured £76m in financing from lenders Natwest and Leumi UK, the London-based subsidiary of the Israeli bank, to complete the project.

If that was a risk, it seems to have paid off. The en-bloc penthouse sale is a huge boon for the project, now scheduled for build completion in early 2023, and is being seen as typical of the confidence returning to the market. In early November, a forecast from Savills estate agency predicted prices in prime central London would rocket 23.9 per cent by 2026, with values expected to rise eight per cent in 2022 alone.

That latter rise would hoik the value of the supermegapenthouse by another couple of million above the Asian billionaire buyer’s £21.4m outlay, before he or she even moves in.

So don’t you go losing any sleep – whether you’re in the penthouse, on the pavement or anywhere in between.

How to get your Metro newspaper fix

Metro newspaper is still available for you to pick up every weekday morning or you can download our app for all your favourite news, features, puzzles… and the exclusive evening edition!