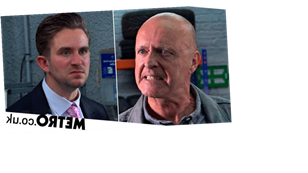 Callum should’ve been spending the day preparing for Stuart’s (Ricky Champ) wedding, but instead he was dragged into the station by DI Thompson (Phillip Wright).

Thompson informed him that he needs substantial evidence on Phil if they’re going to successfully put him away, and therefore he gave him a listening device to plant in The Arches.

Callum was horrified at the request, but he ultimately agreed to do as his boss asked.

However, conflict arose when Danny called into The Arches for a word with Phil —only to find Callum rifling through paperwork!

The gangster proceeded to call Callum a ‘grass’, and when Phil eventually showed up, he didn’t quite know who to believe.

In an effort to get to the bottom of things, the hard-man asked Callum to prove that he isn’t what Danny says he is.

Therefore, when Danny claimed that he’d hurt and kill Ben (Max Bowden), Callum retaliated by knocking him to the ground with a wrench, before beating him repeatedly.

Phil was pleased, but Ben, on the other hand, was horrified to learn that his boyfriend was late for his own brother’s wedding.

Ben knows full well that there’s more to Callum and Phil’s alliance than meets the eye, but will he work out what’s going on?

What’s more, could this secrecy spell trouble in paradise for Ben and Callum?

EastEnders continues Thursday October 1 at 7:35pm on BBC One.

END_OF_DOCUMENT_TOKEN_TO_BE_REPLACED

END_OF_DOCUMENT_TOKEN_TO_BE_REPLACED
We and our partners use cookies on this site to improve our service, perform analytics, personalize advertising, measure advertising performance, and remember website preferences.Ok