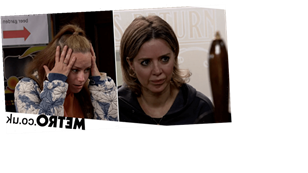 No-one beats herself up more about her mistakes as a mother than Abi Franklin (Sally Carman) and her recent decision not to stand in the way of her twins moving abroad with their adoptive parents has been her way of trying to be as selfless as possible in Coronation Street.

But that’s not to say that it hasn’t killed her inside, considering the prospect of never seeing her two children again, especially with Seb (Harry Visinoni) putting pressure on her.

Abi has attempted to make amends by concentrating on the family she has with Kevin Webster (Michael Le Vell) but Seb has been less than impressed with her for trying to forget about them. Which, of course, is not the truth – and also impossible for a mother.

Bu when the topic is raised again and Gemma Winter (Dolly-Rose Campbell) puts her foot in it while talking about the twins, Abi starts to reach breaking point again.

When Jenny Connor (Sally Ann Matthews) sympathises with Abi over the twins’ imminent departure for Australia, Gemma insensitively declares it would kill her to be separated from the quads.

Abi flees, upset. When Gemma apologises to Abi for her thoughtless remarks.  Abi tearfully explains that, for the first time in her life, she’s trying not to be selfish by letting the twins go.

But is Abi able to let this go? It’s clear it is still leaving her in complete turmoil so will she change her mind about getting in touch with the twins?

And when they do go, how hard will it hit Abi? Given her historically self destructive nature, could it push her down another dark path?

END_OF_DOCUMENT_TOKEN_TO_BE_REPLACED

END_OF_DOCUMENT_TOKEN_TO_BE_REPLACED
We and our partners use cookies on this site to improve our service, perform analytics, personalize advertising, measure advertising performance, and remember website preferences.Ok