The news came as an incredible shock when the 60-year-old was rushed into hospital just after Christmas, particularly as she was in the middle of filming the final Star Wars films The Last Jedi and The Rise of Skywalker.

It was a truly cathartic experience for many fans watching the final film in the Star Wars saga this week, The Rise of Skywalker, as director JJ Abrams ensured Fisher’s final scenes were cut together to give her the final send-off she deserved.

And making fans even more emotional was Mark Hamill, who shared his final goodbye to his on-screen sister and the galactic princess.

The actor then posted two images decades apart of him and Fisher clad in their characters’ costumes.

The first picture depicted the co-stars while they were filming the first Star Wars movie, A New Hope, holding each other closely. 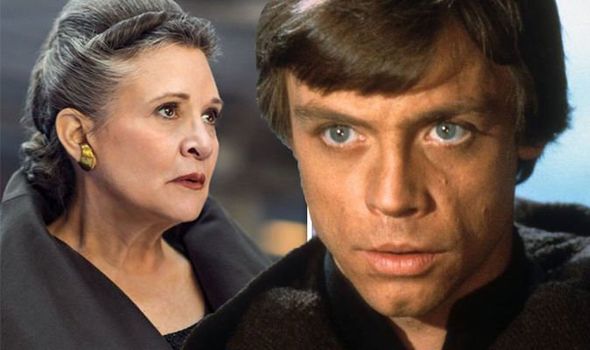 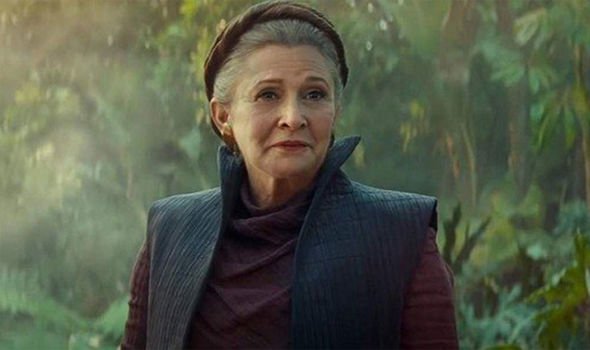 The second saw the pair in similar positions, but Hamill gazed down at the floor with his arm around the beloved star’s shoulder.

Flocking to the comments, fans shared their gratitude for the post and couldn’t hold back their emotions at the actor’s final goodbye to his late co-star.

“Thank you all for the great memories,” one person said.

Another gushed: “Love you, dude. Thank you for everything you’ve done for all of us for so many years.” 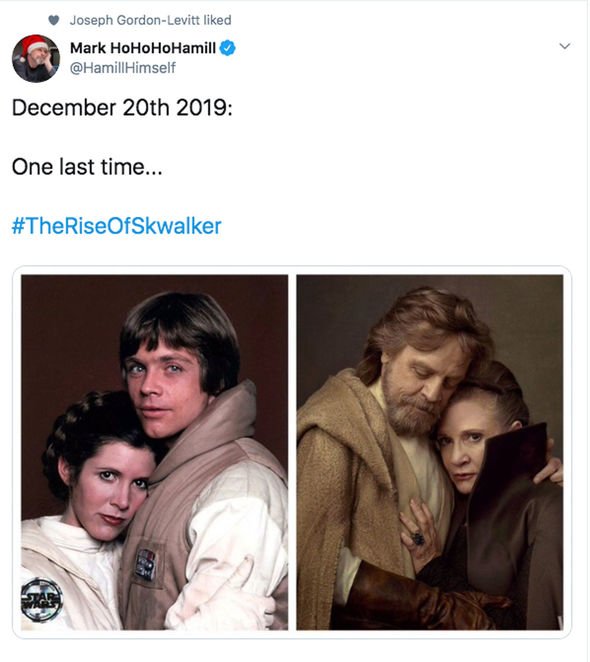 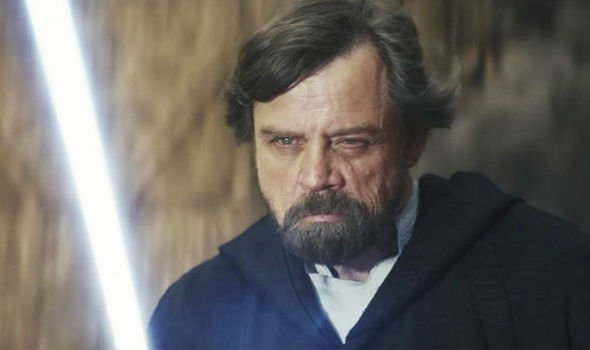 “I can’t imagine what it was like for you seeing those scenes finished,” a third noted.

While a fourth praised: “I can’t thank you enough Mr Hamill. It’s been an incredible journey for so many of us. One we will never forget.”

“Oh Mark, you made me cry. The Force is with you and Carrie forever,” a fifth admitted.

Another said: “I cried with that scene. I miss her dearly. She was truly one of a kind.”

People continued to share their feelings on the post, with one commenting: “Even though I really dislike The Last Jedi… the scene where Luke and Leia say goodbye one last time IS the best scene in the trilogy.”

“I loved the film and they handled Carrie Fisher’s death so good in the film she would be proud,” another theorised.

A third poster added: “Our son who passed away 5 years ago tomorrow, who was best friends with HIS sister, made his presence known last night for our daughter during the movie. You and Star Wars Episode IX helped her cry tears of joy and not sadness. THANK YOU!! #bewithme.”

“Please not one last time. Let’s make a yearly get-together for this tweet,” one fan even begged.

Star Wars Rise of Skywalker ending EXPLAINED: What does the end mean? [EXPLAINER]

Star Wars The Rise of Skywalker: Is Harrison Ford in the film? [REVEAL]

Since it’s release at the midnight screening Wednesday night, Rise of Skywalker has received mixed reviews, with some claiming the film is simply providing “fan service” and rowing back from The Last Jedi, which again left many fans divided.

But regardless, the film is a fitting finish to one of the most iconic franchises in movie history and saw all three original leads Hamill, Fisher and Harrison Ford showing up in some form for one last time.

Star Wars: Rise of Skywalker is in cinemas now.