Stephen Fry quips about how many PMs the Queen has 'tolerated' 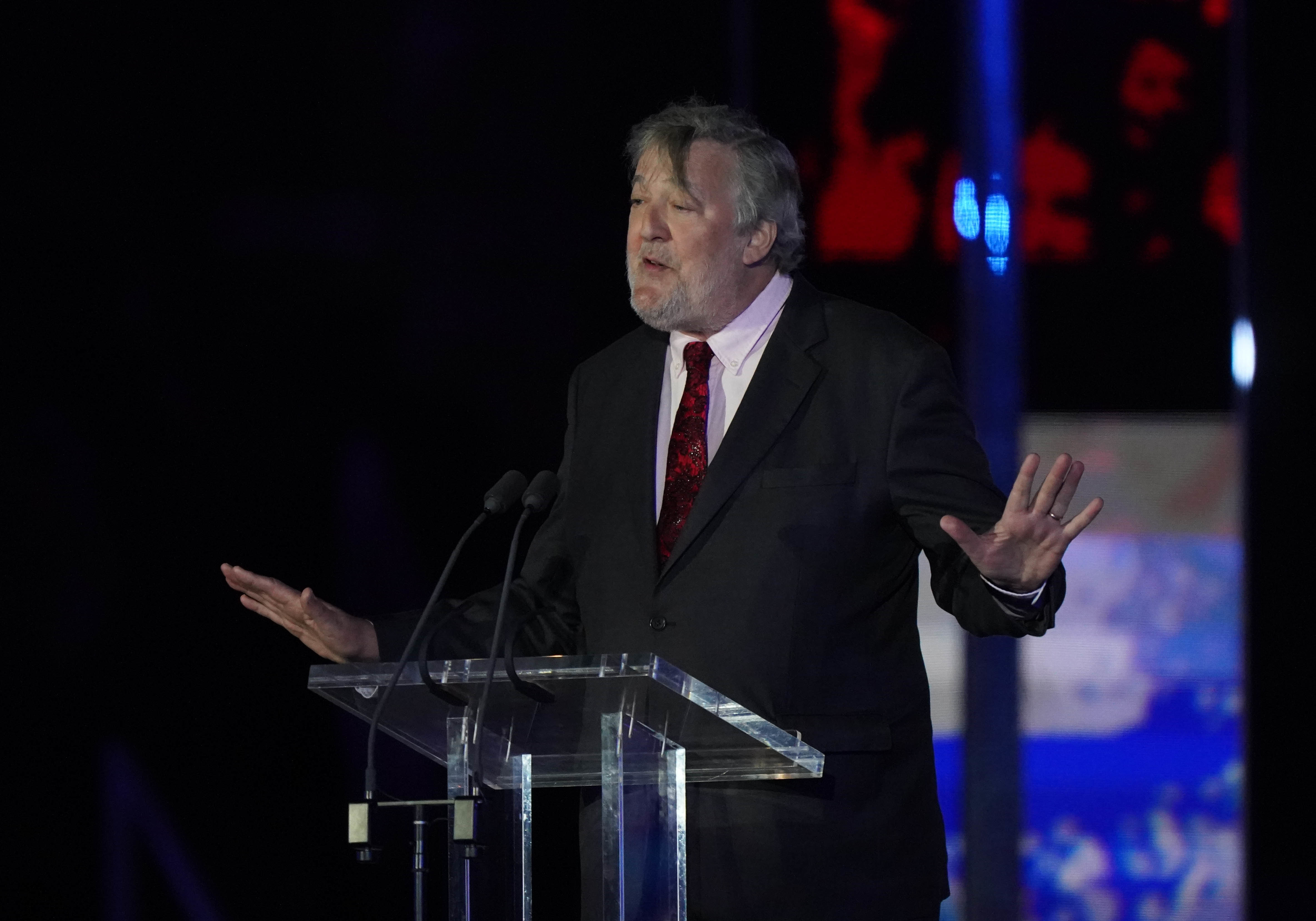 Lee Mack wasn’t the only person unable to resist a cheeky jibe at the Prime Minister at last night’s Platinum Party at the Palace from the Mall as Stephen Fry also made a quip.

The actor and comedian talked of how lucky the country has been under the reign of the Queen and joked about how many leaders she has ‘tolerated’ throughout her 70 years on the throne during his speech.

‘We are all Elizabethans and that’s a wonderful thing to be,’ he told the crowd.

‘As a nation we have been lucky, lucky, lucky above all others to have had our Queen to represent us over 70 years.’

Stephen continued: ‘How many local sewage works has Her Majesty opened with a bright smile? How many plaques unveiled? How many trees planted?

‘How many ribbons cut, ships launched? How many prime ministers tolerated, for that alone no admiration is high enough.’

The crowd cheered raucously at Stephen’s dig with many praising him for it on social media.

Alastair Campbell reacted: ‘I think we know who that was aimed at … nice one @stephenfry.’

‘When Lee Mack and Stephen Fry take the micky out of you to your face to a global audience and you have to read a lesson with a message, you gotta know your time is up!’ another wrote.

A third added: ‘Lee Mack and Stephen Fry calling out Boris whilst he’s in the royal seats…Boris is a f*cking disgrace.’

Comedian Lee kicked off the celebrations on Saturday night by making a joke about partygate in front of Mr Johnson as he addressed the crowd.

With the Prime Minister sat in the royal box, he said: ‘Finally we can say the words “party” and “gate” and it’s a positive.’

The gag drew applause and laughs from the crowd.

It was an impressive event with some 22,000 people hearing live speeches by the Duke of Edinburgh and the Prince of Wales amid performances from stars including Diana Ross, Duran Duran and rock band Queen at Buckingham Palace last night.

Impressive visuals of the Queen were projected on to the royal residence during the patriotic two-and-a-half-hour event, and drones drew three-dimensional corgis and cups of tea in the sky before a closing performance by Diana Ross.

Rock band Queen, whose guitarist Brian May performed on Buckingham Palace roof for the last Party at the Palace in 2002, was joined by singer Adam Lambert, while Eurovision star Sam Ryder also took to the stage in a glittering Union Jack-patterned suit.

Dust off your Union Jack bunting, Queen Elizabeth II’s Platinum Jubilee is well and truly upon us.

Taking place from Thursday, June 2, to Sunday, June 5, the celebrations mark Her Majesty’s record-breaking 70th year on the throne.

Across the UK, there will be street parties, concerts, and other special events attended by the Queen and senior members of the Royal Family.

Visit Metro.co.uk’s Platinum Jubilee page for all the latest updates.