Fox’s Thursday Night Football matchup between the Seattle Seahawks and Arizona Cardinals was the night’s top-rated and most-watched show in broadcast primetime, which also saw the series finale of the CW’s Supernatural wrapping a 15-season run and the Season 3 premiere of ABC’s A Million Little Things.

TNF drew a 2.6 rating in the adults 18-49 demographic and 9.64 million viewers to the Seahawks’ 28-21 victory in the key NFC West matchup, pushing it up a strong five tenths and nearly 2 million viewers compared with last week’s Indianapolis Colts-Tennessee Titans game in the early Nielsen Live+Same Day numbers, which due to the nature of live sports will likely adjust later in the day.

As for Supernatural, the 8 p.m. penultimate episode (0.3, 1.20M) led into the 9 p.m. finale (0.3, 1.39M) of the longest-running fantasy series in TV history. The demo numbers were steady with the final batch of episodes of the Winchester brothers’ saga, with the finale seeing its best audience number of the run.

'Supernatural' Series Finale Recap: [SPOILER] Meets His End, As Others Find A Way To 'Carry On'

The top scripted show for the night was ABC’s Grey’s Anatomy (1.2, 5.75M), off just a tenth from last week’s Season 17 premiere and that McDreamy sequence with Patrick Dempsey. The network’s lineup kicked off with Station 19 (0.9, 5.49M), down two tenths from last week, and wrapped with the Season 3 premiere of A Million Little Things (0.7, 3.98M), which picked up after last season’s cliffhanger in the finale and was steady in the demo with that Season 2 closer.

ABC was second in both overall metrics behind Fox and its NFL game. In third overall was Univision, which aired the 21st annual Latin Grammy Awards (0.6, 1.83M) for the full three hours of primetime. 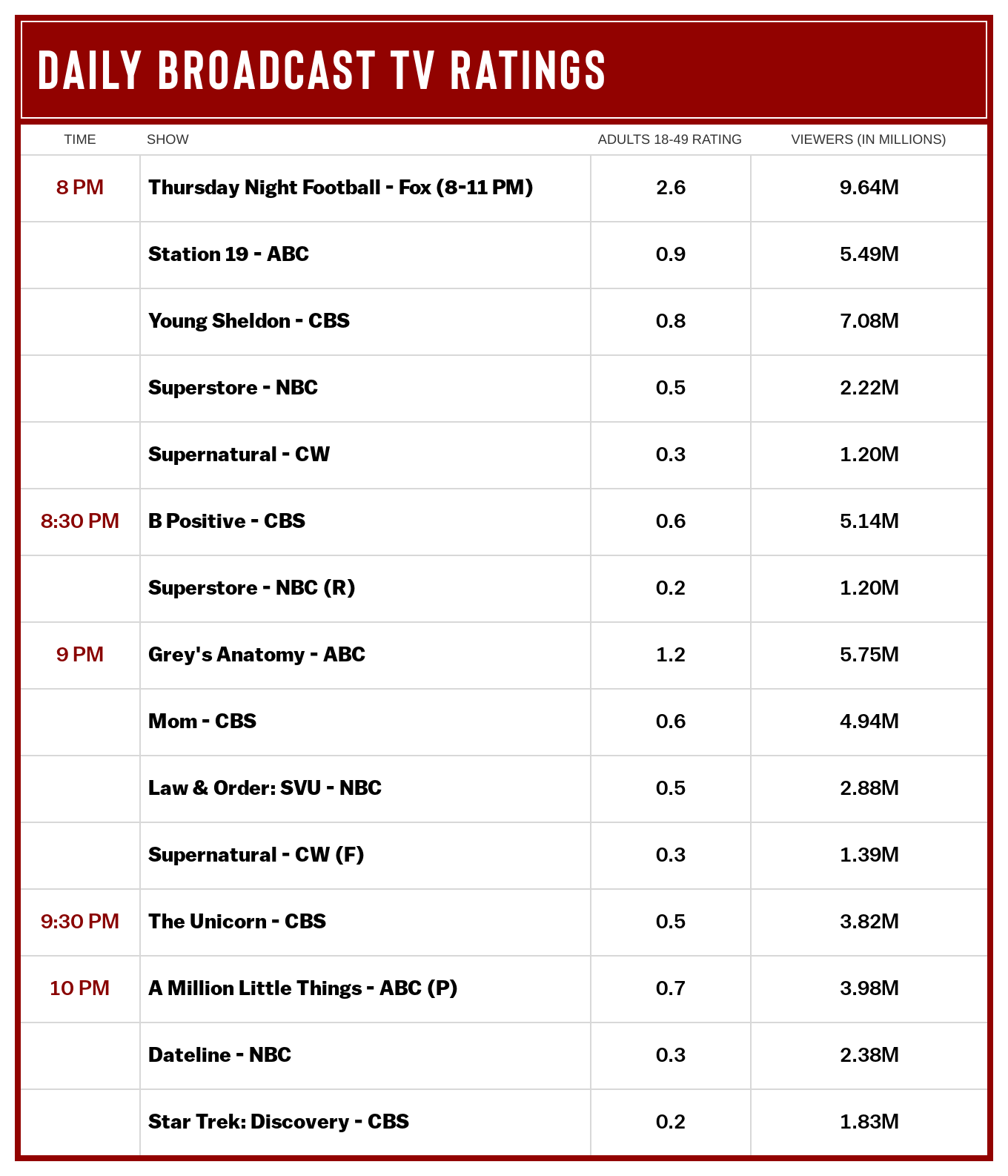