Not having NBA permission to use basketball archival footage turned out to be a blessing in the making of Adam McKay’s HBO series, “Winning Time: The Rise of the Lakers Dynasty” (releasing new episodes on Sundays). It compelled McKay (who directed Episode 1), co-cinematographers Todd Banhazl (“Hustlers”) and Mihai Malaimare Jr. (“The Harder They Fall”), and Oscar-nominated editor Hank Corwin (“Don’t Look Up”) to get creative in evoking the ’80s as a cultural snapshot filtered through the game-changing Los Angeles Lakers dynasty, led by charismatic phenom Magic Johnson (Quincy Isaiah). The drama is a surreal and often absurd variation on McKay’s “Succession,” with the Lakers’ glitzy, entertaining Showtime persona masking a dysfunctional family run by outlier owner Jerry Buss (John C. Reilly).

“The early conversations were that it would be shot on film because of the time period, and because Adam’s a film guy,” said Banhazl, who shot Episodes 1, 2, 5, 6, 9, and 10. “And we knew from the scripts that the show was going to be mixing in footage that we had shot, period footage that we had shot, real archival with photos. It was like a pop culture mixtape, pulling in from all these references from our collective memory.”

The camera, meanwhile, moved in a combination of news documentary and zoom-obsessed Robert Altman fashion. The entire stylistic endeavor was the equivalent of performing jazz, which is a constant between McKay and Corwin as part of their improvisational collaboration. This happens at the outset, with the introduction of Buss breaking the fourth wall at the Playboy Mansion to tell the viewer of his intention to turn the NBA upside down by purchasing the Lakers. As Buss makes his way through the naked, slumbering guests, his intimate perspective becomes more raw and visceral.

“It was almost like this chemical recognition in your brain,” said Corwin, who edited Episode 1 and supervised the rest of the editorial as a credited producer. “We figured we’d start trying to put together a vibe, a feeling of the times. It became collages, at least for me […] a Hockney painting or a William Burroughs with his strips. We were just trying to use analogs to capture the times.” The main title sequence is a perfect collision of basketball, sex, drugs, hip-hop, and Hollywood glam. Another montage foreshadows the rivalry between the Lakers’ Johnson and the Celtics’ Larry Bird (Sean Patrick Small) prior to the NBA draft. Corwin even satirizes the black and white racial undercurrent with over-the-top graphics. 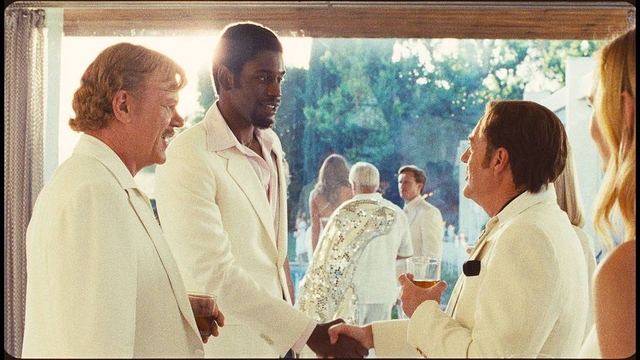 “Winning Time: The Rise of the Lakers Dynasty”

Once Banhazl figured out that the primary format was going to be in 35mm, he decided to emulate the look of Kodak’s long-defunct Ektachrome for the present day ’70s and ’80s, and the even older Kodachrome look for the ’50s and ’60s. Playing into Corwin and McKay’s mix-and-match archival style, the DP shot a variety of film stocks — 35mm, 16mm, and 8mm color and black-and-white — and even incorporated long outdated tube video technology (Ikegami ITC-730A and HL-79 cameras).

But Banhazl push processed all the 35mm color film to make it grainier and add contrast, riffing on the look of iconoclastic photographer William Eggleston. “We underexposed the negative so that it was dirtier,” he said. “We asked the lab [Fotokem] to not dust bust the negative before we scanned it to give it extra dirt, and then we continued to push that look further digitally with [Company 3] colorist Walter Volpatto [building Ektachrome and Kodachrome looks for portions that weren’t actually shot with those reversal stocks]. From there, we wanted to create our own archival look so that’s where the 8mm came in. The rule for that was we’d shoot establishing shots on 8mm and we’d do inserts and period details. But quickly we started breaking that rule. We’d start shooting faces and using 8mm in emotional ways.”

However, they took this even further by intercutting 8mm or Ikegami footage during present-day scenes to extend the archival look for greater intimacy and vulnerability. This occurs when Johnson’s high school girlfriend and future wife Cookie (Tamera Tomakili) breaks up with him in Episode 1. “The 8mm itself with the perf in the frame [taps into] the collective memory and how movies have influenced that,” added cinematographer Malaimare Jr., who shot Episodes 3, 4, 7, and 8. “We also discovered that it was very emotional for the Ikegami. It was not only used for archival, it has such an interesting quality for closeups [with its streaking lights and glowing look].”

Another idea was putting a pistol grip handle on the 8mm camera for Johnson family gatherings, including a church fish fry when Magic says goodbye to his family. “We wanted the audience to feel like they were watching footage shot by a family member. We fondly referred to the style as ‘Dad-Cam,’” Banhazl said.

There’s also a subplot involving Lakers superstar Jerry West (Jason Clarke), whose coaching career is upended with the arrival of Johnson. The show relives West’s trauma of losing six championships to the rival Boston Celtics under coach Red Auerbach (Michael Chiklis). This is depicted in a horrifying montage that presents the Lakers in washed-out color and the Celtics in Gothic black-and-white. 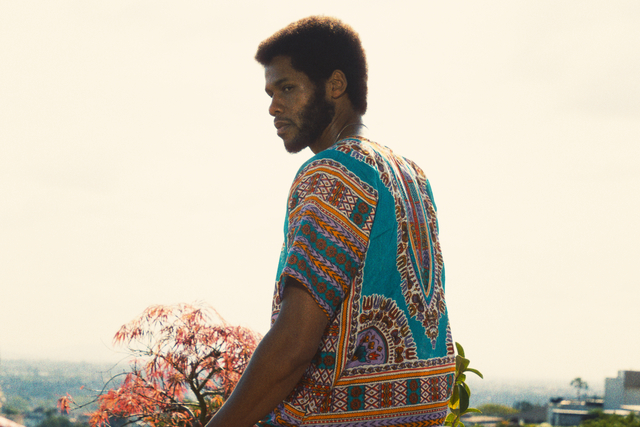 “Winning Time: The Rise of the Lakers Dynasty”

Yet in a devastating Episode 2 prologue, we also witness West endure an abusive childhood in the early ’50s that humanizes and contextualizes his obsession with basketball and winning. “The West flashback is based on a crossed processed Kodachrome film stock from the early 1960s,” Banhazl said. “The idea was to create a battered and bruised reimagining of how the American Dream looked in advertising images of the 1960s. We achieved the look by shooting on 35mm and 16mm film, underexposing and leaving the negative longer in the development bath, and a few digital processes to further degrade the negative and match the look and color of old Kodachrome.”