“David was a huge inspiration for us, and Matt wanted to create a POV-driven, noir detective story,” said Chinlund, who previously worked with Reeves on “The Planet of the Apes” franchise. “And, as the designer, the challenge was weaving a world that could contain all these threads and deliver a Gotham that felt simultaneously grounded yet stitched together in a new space that we haven’t seen before.”

Taking inspiration from Frank Miller’s “Batman: Year One,” Chinlund worked off a totally corrupt Gotham in stitching together a Batworld culled from London (where they shot on location and did set builds at Leavesden and Cardington studios) and New York City (where they also shot). Chinlund literally put the goth into Gotham. “We tried to represent that in the skyline of the city,” he added. “For us, the process of design was imagining Gotham that had this incredible boom time, pre war, where architecture was just flying up, and architectural styles were running fast and loose.

“It was all about ornament and Gothic shapes,” Chinlund continued. “So we were looking at a lot of movie palaces of the period. And then imagining that, as the boom faded, there were various attempts over the years at reconstruction and redevelopment, and that corruption left those attempts rusting on the skylines with unfinished skyscrapers. Using those tools allowed us to create this incredibly ornate and detailed skyline.” London provided the decayed Gothic layer, with Lower Manhattan as the anchor for an unfinished skyscraper. 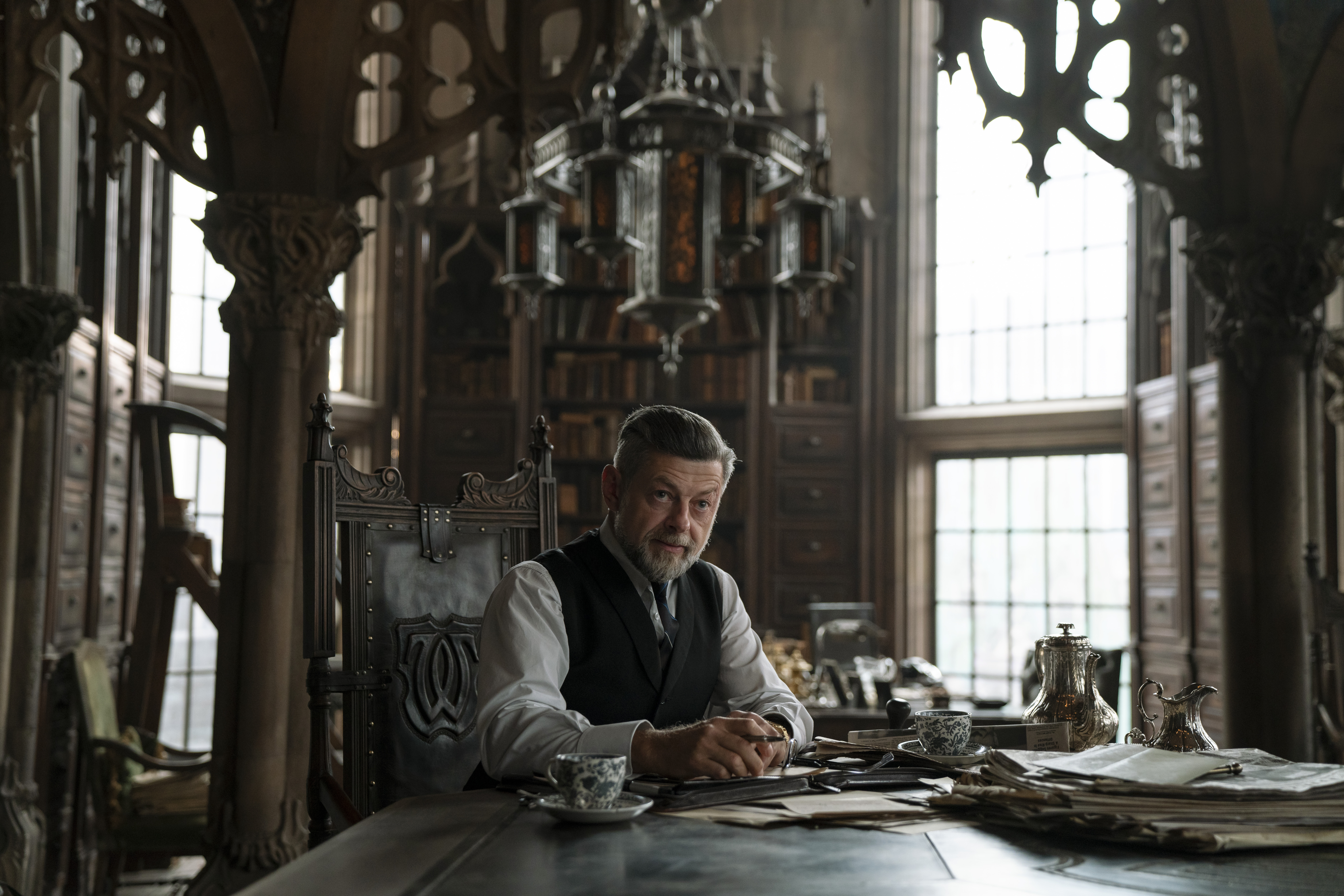 Andy Serkis as Alfred in “The Batman”

The goth imprint permeated the design of Wayne Tower as well, which has turned into a mausoleum for reclusive billionaire Wayne. Bat and bone symbols can be glimpsed throughout, lending a creepy atmosphere. Interestingly, Hearst Castle was a prime inspiration for the Wayne home. “Early on, in the writing process, Matt visited Hearst Castle,” Chinlund said. “It’s quite a pastiche of styles and, at the end of the day, we loved the opportunity that gave us in creating a baroque and Gothic and ornate Wayne Tower. It’s a continuation of the movie palace vibe.”

Additionally, the legendary Batcave was inspired by the train station built beneath New York’s Waldorf Astoria Hotel, so VIPs could surreptitiously travel by train in case of an emergency. “I always loved that idea that there was a secret station, and so it made sense that the Wayne family would have their own private station under Wayne Tower,” Chinlund said. It also perfectly fits Wayne’s more modest DIY mode of invention for making gadgets and weapons.

Speaking of which, the iconic Batmobile was designed as a retro-looking muscle car, further feeding Wayne’s DIY practice. “The car was one of our first conversations, and Matt wanted it to reflect Bruce and his personality,” Chinlund said. “We knew that we wanted it to be a car that Bruce could build on his own. This Bruce has turned his back on Wayne Enterprises, but we loved the idea of him being this gear head with dirt under the fingernails. He was building not only a car but his identity along with it.”

The Batcave from “The Batman”

The Batmobile looks discreet, but then revs up into an intimidating, unstoppable force. Every choice was form following function, including the armor and custom frame, amped-up engine. They topped it off with a roof taken from the ’69 Dodge Charger. Fans, though, will notice a shout out to the original ’60s Batmobile from the TV series, with the red lighting and wings at the rear: “Matt and I grew up on Adam West’s ‘Batman’ and that car, and wanted to bring it back.”

Chinlund, meanwhile, had his own tech device to fall back on from “The Lion King”: VR, which allowed him to build Gotham in 3D space, working with Reeves and cinematographer Greig Fraser (the Oscar frontrunner for “Dune” and an Emmy winner for “The Mandalorian”). “I introduced Matt to VR and I was thrilled to bring that tech onto ‘The Batman,’” he said. “We designed all of the sets in 3D using the Unreal engine, and we were able to develop camera tools, allowing us to storyboard the entire film using the real lenses. So we were wireframing sets and could piece it together, delivering to Matt’s needs. It was very efficient for shot blocking and entirely director driven.”

For instance, VR was helpful in navigating the Tricorner Bridge area of Gotham, highlighted by the elaborate club-within-a-club lair for crime lord Falcone (John Turturro) and associate Oz/Penguin (Colin Farrell). This environment was shot at London Printworks nightclub with additional set builds. However, VR was most useful in planning the Expressway car chase between Batman and Penguin. “Everything you see in there Matt was able to block and animate,” Chinlund said. “So we were moving through that chase at speed way before we shot, which gave [SFX supervisor] Dom Tuhoy and [his] team a lot of time. Dom had an idea for a tipping truck, and they were able to add it to the planning.”

The Batmobile as a muscle car in “The Batman”

The other important tech component was the use of ILM’s vaunted StageCraft LED wall volume system, which allowed Reeves to achieve a gorgeous shot of the Gotham skyline at sunset with Batman in the foreground. This would’ve been time-consuming if shot practically, and was much more believable with StageCraft than with blue or green screen. Fraser’s experience in helping implement StageCraft on “The Mandalorian” proved invaluable. “I must admit, I was a little intimidated at first,” added Chinlund. “It’s very technical and tricky, but our use of Unreal for our VR tools in a lot of ways was seamless. Since we were already designing the whole city in 3D, StageCraft was just a continuation of our process.

“And, for me, as a designer, I was excited about StageCraft in terms of the opportunity to see them, design them, and finish them in prep, much like a painted backdrop. It’s groundbreaking and helps everybody. The actors get to experience the world, they can feel the vertical, looking off the edge of the set. It’s such a benefit not to be chained to the green screen, with perfect lighting and the camera getting close with the right parallax.”