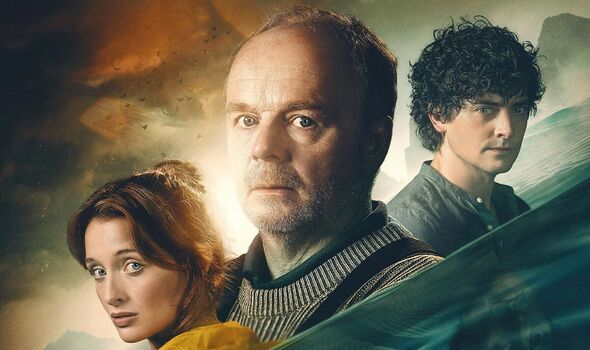 The Catch is coming to Channel 5 and the series is based on the novel of the same name by TM Logan. The thriller is set on the coastline of south-west England and it follows a father who would do anything to protect his daughter. Express.co.uk has all you need to know about who is in the cast.

Who is in The Catch?

Ed Collier is a proud husband, father and fisherman who is afraid of losing his daughter when another man enters her life.

He is played by Jason Watkins, a 60-year-old stage, film and TV actor who has won countless awards for his roles.

He has starred in The Crown, McDonald and Dodds, Trollied and Nativity to name just a few projects.

Speaking to Express.co.uk he praised co-star Cathy Belton, saying: “Cathy has just been so brilliant to work with and from day one I just stood subliminally, consciously or otherwise.

“I looked at her and I knew she understood what was going on.”

Abbie is Ed’s daughter who falls for a rich and powerful man, and she is played by Poppy Gilbert.

Poppy is a 24-year-old British actress who was born in Sweden.

She is known for roles as Barbie in the Netflix series Stay Close and the title character in the BBC One series Chloe.

Rich and handsome Ryan is a huge threat to Ed as he attempts to steal his daughter away from him.

He is played by Aneurin Barnard, a 35-year-old Welsh actor who played Daniel in the Netflix series 1899.

The star is also known for Hunky Dory, The White Queen, Dunkirk, and The Goldfinch.

Ed’s wife Claire’s life is also thrown into chaos as her husband’s obsession spirals out of control.

She is played by Cathy Belton, a 53-year-old Irish actress known for her theatre in TV roles.

Her recent TV credits include Hidden Assets and The Woman in White.

Her stage and screen career spans 60 years and in 1990, she became the first Irish actress to win an Academy Award.

Her credits include My Left Foot, The Field and A Time to Kill.

Bob is played by Ian Pirie, a 57-year-old Scottish actor who is married to actress Victoria Donovan.

He turned professional in 1996 when, with no formal training, he starred in the West End revival of Jesus Christ Superstar.

His other credits include Halo, The Duke and Miss Scarlet and the Duke.

Katz is played by Jade Jordan, an Irish actress and writer.

She is known for her role in the horror film You Are Not My Mother and for her autobiography Nanny, Ma and Me.

Her other credits include The Virtues and Rosie.

George is played by Morgan Palmeria, an actor and musician.

He is making his small-screen debut in The Catch.

The show’s detective is played by Tracy Wiles, a 53-year-old English actress who is known for her radio, stage and TV roles.

She has starred in Bronson, Shetland, Manhunt, Law and Order and Ashes to Ashes.

Crime drama The Diplomat could be the new Death in Paradise

Craig is played by Cameron Jack, a Scottish actor who started his career in West End musicals and small-budget films.

He went on to star in Batman’s The Dark Knight Rises and worked on BBC drama Waterloo Road.

His other credits include Man Down and Silent Witness.

Pauline is played by Menyee Lai, known for her roles in Stay Close, Morbid Curiosity and The Tower.

Wayne is played by Paul Sparkes, known for his roles in Cold Courage, Resistance and Finding Joy.

Josh is played by Jacob Hickey, who appears to be making his small-screen debut in the series.

Baxter is played by Karl Hogan, who began his acting career in 2018.

His previous credits include Otherworld, Teen Life and The Last Duel.

Viewers may also recognise him from Fate: The Winx Saga, Mediation and Industry.

The Catch airs on Channel 5 from January 25 at 9pm