THE Chase's Bradley Walsh has left fans laughing after being forced to ask a player a very naughty sounding question. 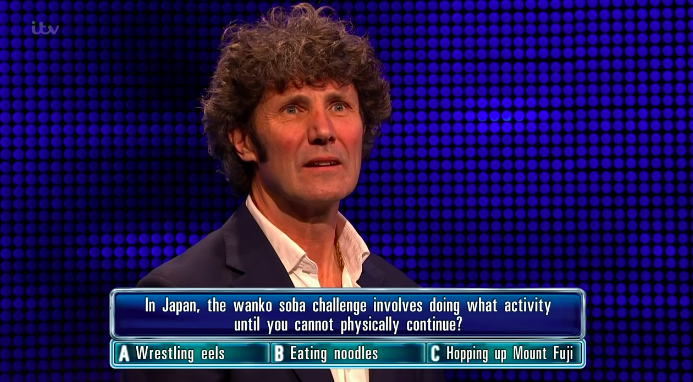 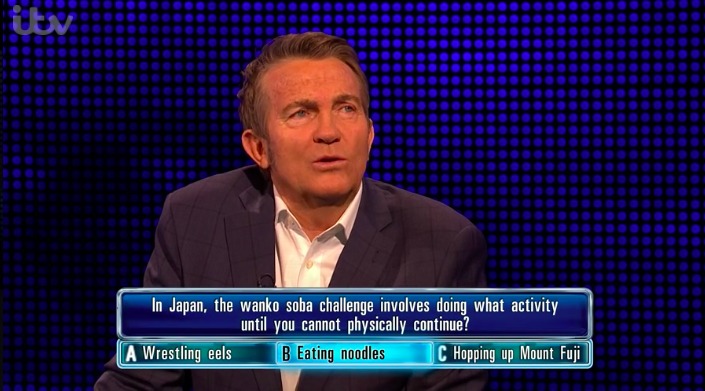 He asked Aldo: "In Japan, the wanko soba challenge involves doing what activity until you cannot physically continue?"

As Bradley read out the question, the studio audience burst into laughter – and viewers at home found it equally as funny.

Taking to Twitter, one fan wrote: "The wanko soba challenge, do it till u can't do it anymore? Is the clue in the question #TheChase."

Another mused: "Wanko soba challenge? Tough gig at 7am on a saturday morning to be honest #thechase."

The correct answer was 'eating noodles'. Both Aldo and Chaser Shaun Wallace got it right.

Meanwhile, fans of The Chase were treated to a similar incident just hours earlier during a celebrity special episode of Beat The Chasers.

During Monday night's show, comedienne Jenny Eclair was asked: "Which of these has not been an Olympic Games event? Is it A, tug-of-war, B, sack race, C, motor boating."

I was one step away from homelessness before First Dates, says Cici Coleman

'Motor boating' can be slang for a sexual act that sees a man bury his face in a woman's breasts while making the noise of a motorboat.

Knowing this, Bradley pursed his lips together and blew a raspberry as he replied to Eclair: "Motor boating…okay. I'm not sure about that."

Chaser Jenny 'The Vixen' Ryan, the studio audience and viewers at home immediately burst into giggles.