After her acclaimed turn on the Amazon series Transparent, longtime actress Alexandra Billings has made notable appearances on shows like Goliath and Diary of a Future President as well as on Broadway in The Nap and Wicked. Now, she’s currently guest-starring on The Conners in a multi-episode arc as Robin, a supervisor at the Wellman factory where Becky (Lecy Goranson) and Darlene (Sara Gilbert) now work in season 3.

“One of the things I love about Robin is she’s flawed, she’s fallible, she’s got a temper,” Billings tells ET about her character, who clashes with Becky over her continued tardiness at work. “She’s not the nicest human being in the world.”

On the most recent episode, “Protest, Drug Test and One Leaves the Nest,” which aired on Wednesday, Robin reveals that she’s quitting her job after the factory mandates that all employees must submit to a supervised drug test. When confronted by Becky over the decision, Robin shares that she’s a transgender woman.

After Becky comes to her defense, saying that she shouldn’t be forced to come out, Robin explains what the real issue is: she doesn’t want to be subject to unwanted humiliation and negative attention.

“I came out a long, long time ago. All of my husbands have known, my friends know, my family knows. It’s the people that don’t know that don’t need to know. It doesn’t matter to my dry cleaner and it doesn’t matter at work,” Robin says, adding, “It’s not worth the PTSD. That happens a lot in our community. Movies like Ace Ventura where all the men vomit because they find out the woman is trans doesn’t make you want to share stuff.” 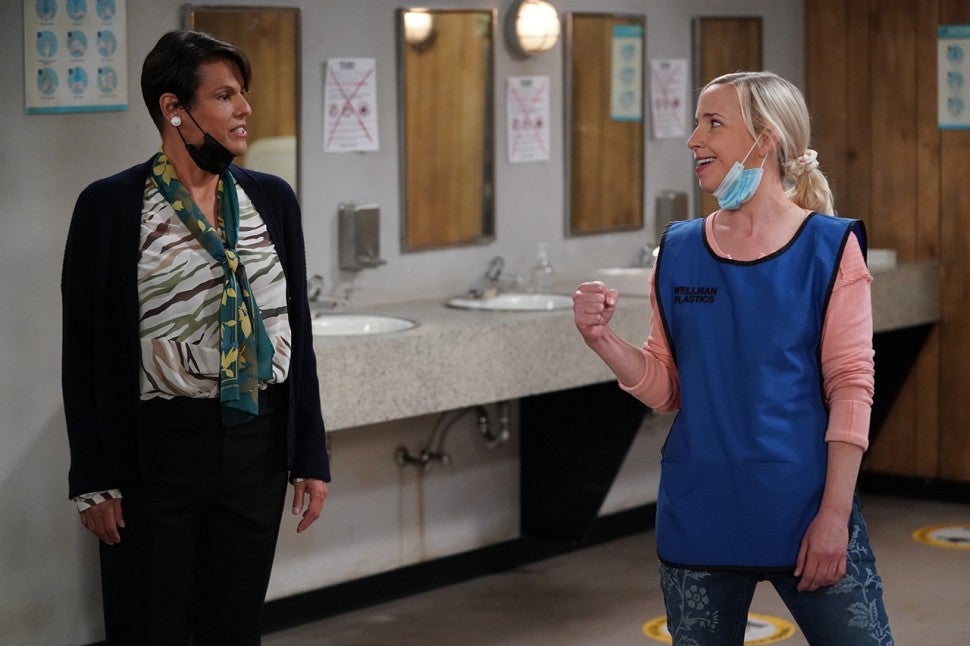 While there have been similar incidents about drug testing reported in the news, for Billings, the power of the scene spoke to “when trans people and why trans people reveal,” she says. “That’s really for me what the focus was because Robin does this in a way that is about, ‘I’m making a decision to do this because it has something to do with why you think I might be a coward, right?’ Because she’s leaving and Becky says, ‘Don’t do that.’”

In actuality, Billings says, “That has nothing to do with it. I’m not running away.” Robin, the actress says, is not someone who feels the need to come out to everyone all the time. But more importantly, the act of coming out or revealing oneself as Billings puts it should be when they’re in control and feel safe doing so.

“The great example of Robin is you can be a trans person and reveal when you’re comfortable, when you need to, when it’s safe,” she explains. “And not according to anyone else’s rules.”

In the context of the real world, especially after Oscar-nominated performer Elliot Page came out as transgender, Billings says it’s important that transgender people reveal themselves on their own terms.

“I always tell any trans human being, wherever they are in their journey, that whenever they decide to reveal, that they do it when they feel safe. And safety can be complex, but you know in your gut when you are being forced to do something, when you feel pushed to do something. And you know in your gut when you make the decision and you say to yourself, ‘This feels really good. It feels necessary. It feels right. I feel good about it. It’s bringing me a little bit of joy.’” she explains, adding, “That’s what I loved about that scene between Robin and Becky.”

Billings says Becky’s reaction is “beautiful” because there’s no gobsmacked moment where she (or the audience) overreacts to Robin’s disclosure. “The way they wrote it was revolutionary in the sense that I say it. It’s over,” she says. And just like that, “Robin just becomes another person in town.”

When it comes to the storyline in the episode, which was penned by Debby Wolfe, Billings says that the writers’ room opened the door for her feedback on the script before they filmed. “And I said, ‘Don’t worry. You’re going to get my feedback,’” she recalls, adding that after reading it, “The only thing I had to do was maybe change two or three little, tiny lines. They were little shifts in dialogue and temperature. Otherwise, it’s very funny.”

It’s also a far cry from her experiences with the writers on Curb Your Enthusiasm, which wrote a degrading scene where a trans woman bails on the line to the ladies’ restroom for a urinal in the interest of time. At the time, she said, “I refuse to read for this part and you should change it.”

“Isn’t that funny?,” Billings says now, remarking on how different the experiences were on both sets while both writers’ rooms were largely filled with similar old, white cisgender men.

Ultimately, she credits the increasing visibility of transgender and non binary people working both in front of and behind the camera on film and TV. “Hollywood has to take note of us and so we’re helping to educate them,” she says. “And they are taking a step forward — it feels that way, anyway.”

While the episode is meant to be the big moment of her arc on the show, Billings says that she’s since been asked back to do more episodes, with Robin now part of the fabric of the show. “I was only supposed to do a couple of episodes and they kept asking me back,” she reveals.

She also credits the writers for getting to know her better as she’s continued to work on the show and write Robin to her tempo and cadences as a performer. “We started to find out as the episodes went on, who exactly Robin is,” Billings says, adding that while audiences might not see as much of her after this episode, that’ll she be around and continue to make her mark. “I felt very blessed and very lucky.”

The Conners airs Wednesdays at 9 p.m. ET/PT on ABC.