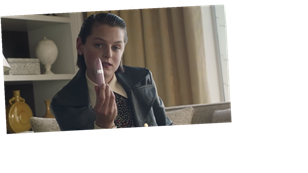 Emma Corrin, who will play the Princess in series four of the Netflix smash, says she uses the discreet toy as a way to "unwind".

Diana herself was claimed have carried a sex toy with her at all times, believing it would bring her luck, according to her ex-bodyguard Ken Wharfe.

During an episode of Vogue's "In The Bag", Emma, 24, revealed that she also doesn't travel without her toy which can be confused for lipstick.

"It's great if you're stressed and need to unwind."

She went on to say: "Also, it kind of looks like a lipstick so, you know, nice and subtle to bring about with you."

Wharfe said that Diana was gifted a prank sex toy while on a "wild staff night out" in Paris in 1992.

The toy, which was often referred to as "Le gadget" or simply "the gadget", was planted in Diana's bag by her sister, Lady Sarah McCorquodale.

Writing in his tell-all book about life with Prince William's mum, Wharfe wrote that it became her "secret mascot for foreign trips."

He went on to write: "She attached almost superstitious importance to it and, when we arrived in Nepal the following March, she turned to me and said: 'I hope we've got Le Gadget, Ken. You know everything will go wrong without it'.

"Much to her consternation, I had to admit it had been left in a drawer at Kensington Palace."

Following orders from Diana, the sex toy is believed to have been shipped in a diplomatic bag to the Embassy in Nepal.

Ken added that the toy was delivered to Diana on a silver tray during a press reception at the ambassador's official residence.

"The Princess was preparing to meet the media in the gardens when the package was handed to Diana's equerry, Captain Ed Musto of the Royal Marines – who made the ill-advised decision to open the packet and remove the offending item, in front of all the guests," he went on to pen.

He added that following a short silence, the people's princess joked: "Oh, that must be for me," and began laughing.

The Crown season four airs on Netflix on November 15.

END_OF_DOCUMENT_TOKEN_TO_BE_REPLACED

END_OF_DOCUMENT_TOKEN_TO_BE_REPLACED
We and our partners use cookies on this site to improve our service, perform analytics, personalize advertising, measure advertising performance, and remember website preferences.Ok