The Equalizer Premiere Recap: How Does Robyn's Feud With Mason Quinn End?! — Plus, Grade the Episode!

Self-assured vigilante Robyn McCall is usually rescuing others. But at the start of season three of The Equalizer, which premiered Sunday on CBS, our hero is in need of potentially life-saving assistance.

At the end of last season’s finale, Robyn was kidnapped from her vehicle in front of Aunt Vi and Delilah. Her assailants were presumably affiliated with Mason Quinn, whom Robyn was obsessively hunting after the terrorist murdered William Bishop (played by Chris Noth), her former superior and friend.

The new episode opens moments after Robyn’s disappearance, as Aunt Vi and Delilah frantically convey whatever they can remember to responding police officers, including Det. Dante. Although Dante had previous dealings with Delilah, he didn’t know she was Robyn’s daughter. Delilah reluctantly reveals the information — thus dismantling another wall around Robyn’s mysterious life.

Delilah also enlists Mel and Harry in the search for her mother, who is shown strapped to a bed in a building formerly used by the military. 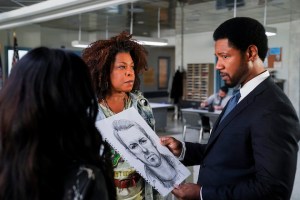 Thanks to Delilah’s details about the kidnappers’ vehicle, and Aunt Vi’s description of one of the captors, Dante tracks down one of the culprits and forces him to give up Robyn’s location. Meanwhile, Mel sits down with Quinn’s associate Omar Delgado, who is being held at a CIA facility. She learns of Quinn’s plans to set off radioactive bombs somewhere in the city that day — just before Delgado succumbs to a poisoned cigarette sent by Quinn. She notifies the authorities, who do not warn the public out of fear of inciting panic.

Mel does warn Aunt Vi and Delilah, but the stubborn teenager initially refuses to leave her mother behind. Aunt Vi informs Delilah’s father of the impending danger, and he orders Delilah to leave town with him and Aunt Vi.

After taking down one of her guards, Robyn finally comes face to face with Quinn, who reveals a deep-fake video of Robyn taking credit for the terrorist attack. “This city is a false beacon of freedom,” Quinn says. 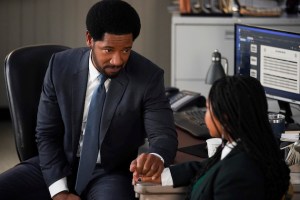 At the same time, Dante and Mel have breached the building with guidance from Harry, who is surveilling the site. However, by the time they reach the command center, they find that Robyn, Quinn and his henchmen have disappeared.

But Quinn left a tracking feature to mislead them into thinking that multiple bombs were being transported in three vans, and that they were set to detonate at 6 p.m. Accompanied by CIA handler Carter Griffin, the trio follows the vans and finds Robyn had escaped one of them after shooting two accompanying guards.

Once they discover the vans are empty, they deduce that there is only a single bomb in Liberty Park near the Freedom Tower. They locate the bomb and discover that it has a remote detonator, which Quinn plans to activate from a separate location. 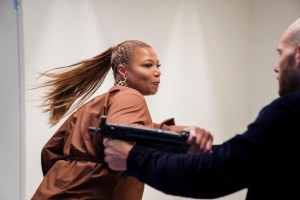 Robyn finds Quinn at a rooftop helipad and shoots at him, but he still manages to press the detonator. After a moment of panic, Robyn calls Harry, who said he helped remove the radioactive canister before the bomb exploded.

His plan foiled, Quinn threatens Robyn’s family, and she responds by hitting him in the head with her gun, just before Carter shows up to arrest him. But then he manages to wriggle free from Carter’s grasp, forcing Robyn to shoot him.

After he tumbles off the roof of the building, satisfaction washes over Robyn’s face. “That’s for Bishop,” she says.

Dante, Mel, Harry and Robyn meet up, and Robyn and Dante embrace. “You’re not getting rid of me that easily” she says, fueling the “will they or won’t they” dynamic of their relationship. “We’re just getting started.” Then, the four of them walk off in slow motion like a badass — albeit more worldly — version of the Avengers.

Back at home, Robyn is confronted by her ex-husband, who admits he has questions about her life, but he puts them on hold as she reunites with Delilah and Aunt Vi. However, he issues a warning that might as well characterize the increasingly perilous overlapping of Robyn’s career with her family life: “This is far from over.”

What did you think of the episode, including the resolution of Robyn’s feud with Mason Quinn? Grade the premiere via the poll below, then tell us in the comments!