Hulu’s award-winning drama The Handmaid’s Tale debuted its highly anticipated fifth season with a double episode premiere. After a major clue, it looks as though Serena Joy (played by Yvonne Strahovski) could meet her death at the hands of Commander Joseph Lawrence (Bradley Whitford).

The Handmaid’s Tale season five picked up from the shocking and brutal death of Commander Fred Waterford (Joseph Fiennes).

June Osborne (Elisabeth Moss) got her first piece of revenge for the abuse she suffered in his household, in Gilead.

Viewers also got to see his wife Serena’s reaction to his death and although she was momentarily engulfed in grief, she used his death to her advantage to get back at June.

Although she was still in custody, a pregnant Serena travelled to Gilead to organise Fred’s funeral. 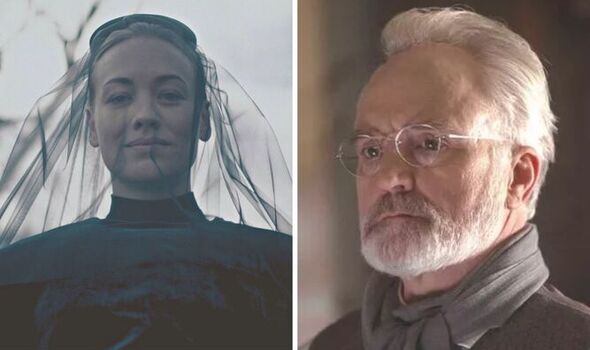 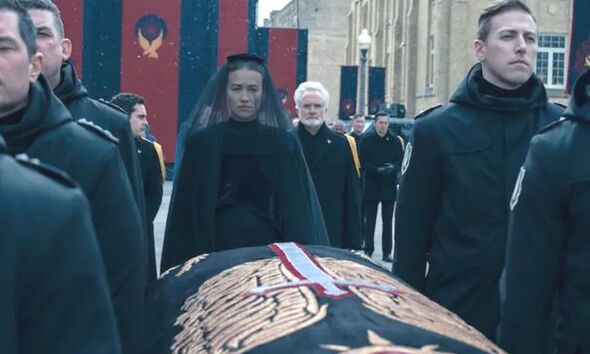 As Fred received immunity for agreeing to provide inside information about Gilead, he was shunned by his fellow Commanders as they initially planned a small and hushed funeral.

After they refused to give Fred an upscale funeral, she threatened them and said: “Could you imagine what the other Commanders would do if they knew that you had helped a Handmaid kill her Commander?”

Although Lawrence hit back with: “Bold accusation,” it looks as though he could kill Serena out of fear of being exposed. 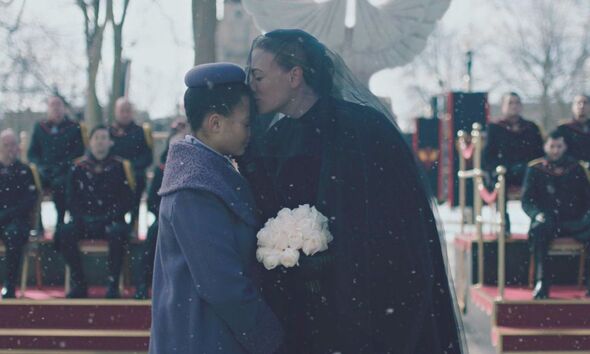 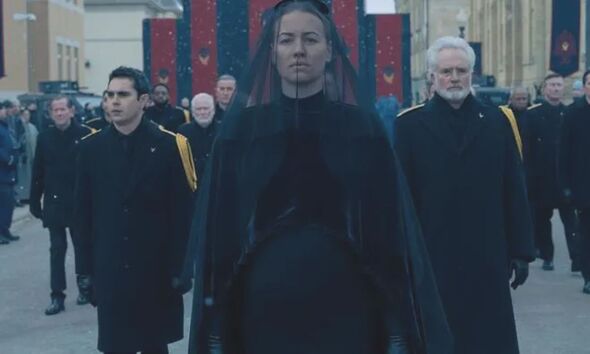 During a segment of Inside the Episode for episode two, Nick Blaine star opened up about his character’s fears.

Max revealed: “When Serena returns Nick and Commander Lawrence are both sort of impressed by it, and then also slightly neurotic about how much she knows.”

Despite initial fears, viewers learned June had gotten away with her crime, as the murder didn’t happen on Canadian soil but took place on No Man’s Land.

However, Serena was able to get her sinister revenge after her threat scared Commander Lawrence enough to convince the Commander to make Fred’s funeral grand.

Fred’s elaborate funeral was an international event and was live-streamed across the world.

As a result, when June and her husband Luke Bankole (OT Fagbenle) stepped out onto the street after a date, they were faced with the stream of Fred’s funeral.

It had been turned into a grand event with all of Gilead honouring him as a leader and an important figure in establishing the state.

As June watched in horror, her disgust soon turned into rage as she watched Serena get handed some flowers by a school-age child.

In response, Serena kissed the child on the forehead before giving a slight yet sinister smile to the camera.

The child turned out to be June and Luke’s daughter Hannah Bankole (Jordanna Blake).

During the pilot, she had been ripped from June’s arms and placed with a different family when Gilead went into power.

Serena did so to spite June for killing Fred as she knew how desperate June was to reunite with Hannah.

However, as the show continues, fans may soon see Commander Lawrence, Commander Nick and June team up to take down Serena for good.

The Handmaid’s Tale continues weekly on Sunday on Hulu. A UK release date has yet to be announced.