This week on The Orville, Claire got a blast from her past as the ship boldly went where… yada yada.

The second episode of The Orville: New Horizons — or as I call it, The Orville: What Contractual Loophole Is the Conspicuous Subtitle Exploiting? — revolves around the arrival of Admiral Paul Christie (played by Days of Our Lives‘ James Read), who needs a ride to meet up with a Krill delegation and begin negotiations to allow the Union access to the Neklav Sector beyond Krill space. Ed’s announcement of the admiral’s imminent visit clearly affects Claire, who later — after receiving a very genial visit from Christie himself, and then attending a diplomatic reception — confides in Kelly that she was once married… to Admiral Christie. (tl;dr Claire was a med student, Christie her professor, they got hitched shortly after she got her degree but ultimately disagreed over her role in the marriage.)

Flanked by Ed and Kelly, Admiral Christie the next day hammers out some details with two Krill delegates, agreeing to follow a specific path to the Neklav Sector and allowing them to attach a homing beacon to the Orville. But the meat of the meeting winds up revolving around the admiral’s interest in exploring the Kalarr Expanse beyond Krill space, and that raises red flags for the delegates. They warn that, in part based on the teachings of their religious text, the Kalarr Expanse is a “domain of evil” populated by soul-sucking “demons,” and they caution the Orville to steer clear. But in lieu of any hard evidence supporting the Krills’ claims, the Orville plans to forge ahead — so their guests leave them with not well wishes, but a prayer “for those who are about to die.”

What the Orville finds in the Kalarr Expanse is a trusty sci-fi trope: a seemingly uninhabited space station that, unbeknownst to anyone until it is too late (and the admiral is quietly infected), contains undetected life forms that spray microbes. The admiral’s condition is not noticed until everyone is back on the ship, and he collapses, violently convulses, and quickly sprouts a second and third eyeball on his ickly mutated head. 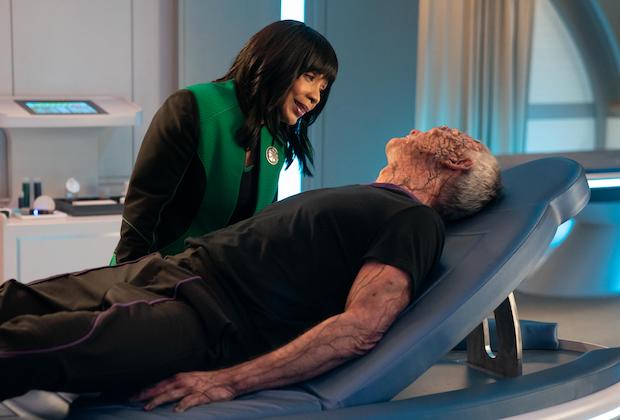 Later, Christie disappears from the sick bay, soon after which the ship loses every drop of power, due to an override authorized by the admiral’s security key. We and Claire’s nurse then see that the admiral has fully mutated into an alien life form, one whose spittle can near-instantly rewrite a victim’s DNA to join its kind. What’s more, the beacon aboard the nearby alien space station switches from transmitting a distress call to broadcasting the Orville‘s coordinates!

Having already attacked the nurse, the mutated Admiral Christie attacks/transforms a rando crewman who had found Claire’s sons roaming the blacked-out, haunted house-like ship. But before the creatures can target Marcus and Ty, Tala baits them into chasing her into the shuttle bay, where she does her best to pummel, body slam and whale on them. And just as Claire express her need for one of the aliens to study/hopefully develop a counter-agent to its spittle, Tala lugs in a KO’d E.T.

Claire winds up discovering that the newly transformed aliens at this early stage have highly vulnerable immune systems, so she can effectively end them by dispersing a common cold. (Sorry, Bortus, you may get the sniffles.) But before they take that action, it is deemed ethical to at least give their onetime colleagues a chance to surrender. So, speaking with what-used-to-be-her-ex husband directly, Claire delivers an ultimatum: leave the Orville and board your kind’s arriving space ship, or die. After some thought and uttering veiled threats, “Paul” wails to/confers with his kind and they agree to go, though “not forever.”

In the aftermath of this traumatic crisis, Isaac checks in on Claire, as he says humans are wont to do. She reports back that she is “OK,” then tells Isaac she misses their time together, and invites him to join her at her dining table.

What did you think of the episode “Shadow Realms”?

Want scoop on The Orville, or for any other show? Email [email protected] and your question may be answered via Matt’s Inside Line.