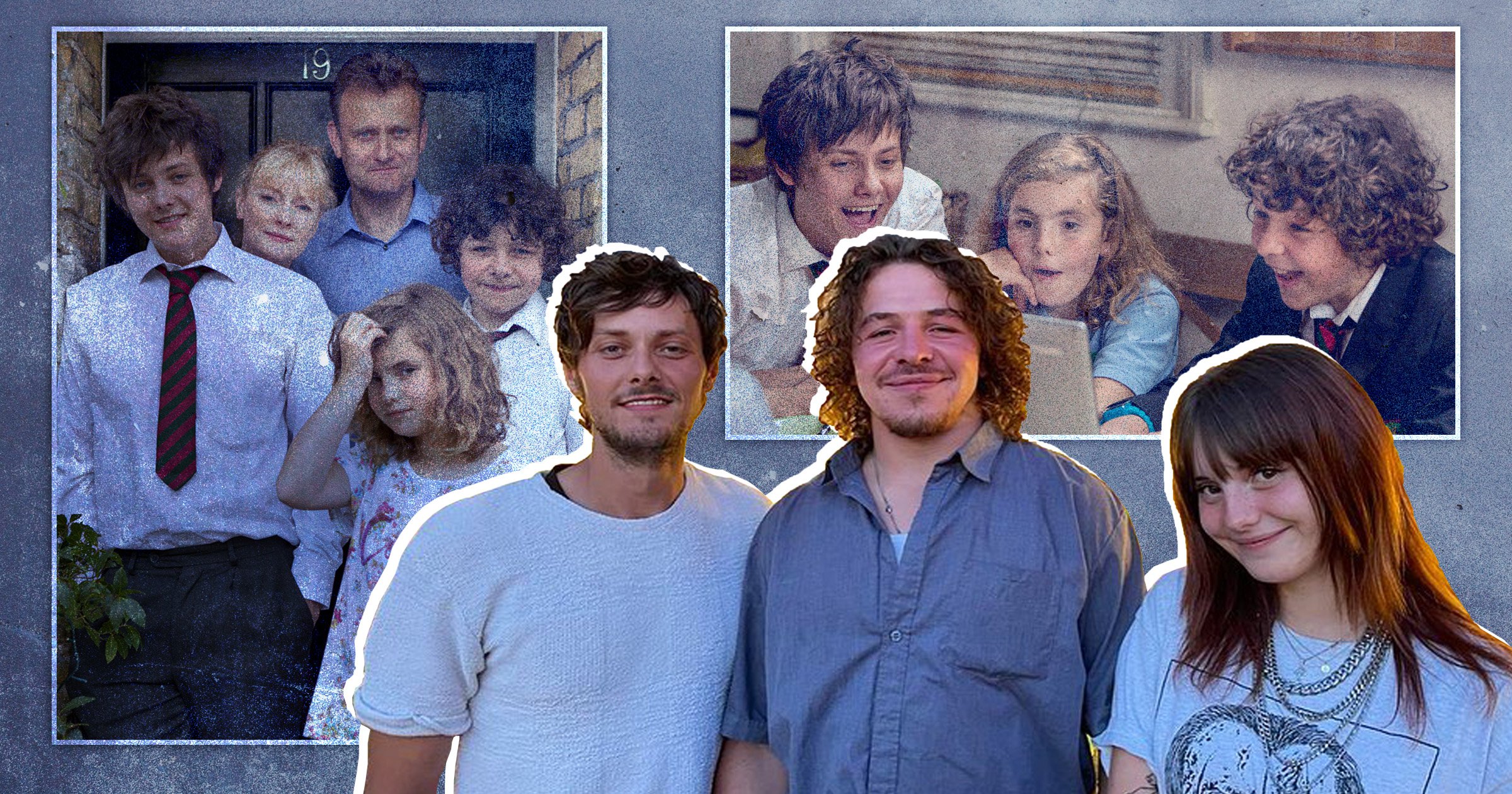 Outnumbered is one of the biggest BBC sitcoms this side of the millennium, so as it celebrates 15 years since it first came to screen, Metro.co.uk chatted to both Daniel Roche and Tyger Drew-Honey on what it was like to be propelled to fame as kids.

Viewers first met the Brockman family back in the summer of 2007, telling the story of parents Pete (Hugh Dennis) and Sue (Claire Skinner) desperately trying, but failing, to stay one step ahead of their children.

Created by Andy Hamilton and Guy Jenkin, the brains behind the hit 90s series Drop the Dead Donkey, Outnumbered ran for 10 years on the BBC and drew millions of loyal fans over its five series and multiple specials.

it quickly won the hearts of fans across the UK with its clever heavily improvised dialogue making for scarily relatable family dynamics on-screen and providing a lot of laughs.

The recognisable names of Hugh and Claire were cast as the parents of the brood, while viewers were introduced to a new group of child stars as their brilliantly funny and testing kids.

Tyger Drew-Honey, Daniel Roche and Ramona Marquez burst onto the scene when they were cast at the age of just 10, 6 and 4.

And they’ve definitely all grown up a bit since then.

Naturally, we had to catch up with some of the cast to mark the huge milestone, so we chatted to Tyger and Daniel, who gave us the lowdown on exactly what it was like to be a part of.

Everything on set was thought out for the kids

Daniel and Tyger both remembered how – even if they didn’t realise it at the time – the set was tailored to ensure it benefitted the show’s child stars.

Daniel told us: ‘Andy and Guy because they made their aim to basically totally prove wrong that old Hollywood adage about not working with kids. The way they sought to do that was basically take all of the kind of intensity of your average film set out of it, so it was really low pressure, but low intensity. And so at the time, everything was so chill or even the whole.’

Tyger gave some insight into how this was done, with particular emphasis on helping Ramona, who was just 4 years old when filming started: ‘So Ramona wouldn’t get too overwhelmed, for the first couple of series they didn’t even use a clapper board. Because that would that would have maybe made it feel a little bit nerve-wracking as well.

‘It’s they’re doing that right in front of Ramona’s face, just before the scene starts kind of thing. They thought, we won’t do any of that. It was a whole new world actually. Looking back now, they really wanted the children to feel very comfortable.’

But continuity was quite difficult to keep up at times…

Daniel admitted he found it easy to get distracted on set due to it being kitted out with toys and other fun things to play with, which sometimes made him a ‘nightmare’ for the props department.

He told us: ‘Outnumbered, it was really fun. Obviously, you’ve got to think as well like it’s a house I was a kid. There’s a house and they’ve got props like toys, all this stuff everywhere. I was such a nightmare for the prop department.

‘Constantly between takes I’d start messing around with something and then they’d have to go and check back old clips and make sure everything was in the right place. Yeah, I had a great time.’

The crew was kept pretty much the same throughout

Fans will remember that the core cast of Outnumbered was pretty small, with just the five main Brockman family members sometimes joined by supporting cast.

But it wasn’t just the cast kept consistent throughout, with the boys recalling how the crew ‘rarely changed’, making for a sense of ‘family’ on set.

Tyger explained: ‘We had the same cameramen and lighting men and sound men, from the first series to the end of the last special and that really helped with that sense of, we are kind of one big family. It’s not like you’ve got loads of new people to get to know every year.’

‘Basically the whole way through, there was this kind of emphasis on continuity with the crew,’ Dan agreed. ‘Which meant beyond the small cast, there was this wider group of people you’d see basically every day for two months straight and then wouldn’t see for years, maybe. But then the next time you’re shooting, it’s them again. They did a really good job in making it a fun and relaxing environment.’

Yep, they did get recognised a lot growing up

Tyger and Dan both came to the roles when they were still in primary school, but with both now in their 20s, they can remember having quite a lot of attention whilst appearing on the show and going through their later school years.

‘I went through the same primary school, but then I went to a new school for secondary school and at first, that was like a major deal, because it was just a whole different group of people and obviously, people knew me from Outnumbered,’ Dan told us.

But it was his time at university where he really found he got a lot more attention, adding: ‘Because at school, it kind of died down and people got over it. The one area where I did really realise it was uni because it’s just so big! You’ll see people every time you go out who you’ve never seen before ever. And it just meant that it was like constantly, a thing.’

Tyger recalled having to be careful when it came to going to his first parties with friends, adding: ‘When I got to sort of the age of around 14/15/16, if I wanted to be drinking at parties with my friends, there were some issues which could have arisen out of that.

‘I always felt like I couldn’t behave exactly how maybe the other kids my age were. That’s the only sort of negative of it, I was slightly in the public eye.’

They all had a lot of fun on-set

Unsurprisingly, they had to find ways to entertain themselves in between takes – but it doesn’t sound like it was that difficult.

Tyger shared with us the excitement of all getting their own trailers: ‘We had some fun in those trailers! Dan and Ramona and I, for a couple of seasons actually, this game extended, we would then play hide and seek in these tiny little Winnebago things that they used to put us in.

‘There are not many spaces to hide in them, which just goes to show how small Ramona was because she, by the end of the time we got big enough to not play anymore, she’d probably been in every single cupboard in one of those Winnebagos. If you’ve got three kids sitting around in a trailer, they just find stuff to do.’

They’ve still got a very solid bond, and catch up at least once a year

‘We definitely don’t live in each other’s pockets,’ Tyger told us of keeping in contact with the others. ‘We’ve all got our own lives, but we do have this incredible, unique bond. We went through this very unique experience together.

‘Lots of kids get into telly, but we were the three Outnumbered kids, so we went on this very specific journey together and will always have a bond.

He continued by saying they catch up ‘once or twice a year without fail’, and added: ‘Whenever there’s anything kind of going on, in any of our lives – like for instance, a couple of times I’ve been in the theatre – then they come to see it and we go out for a big dinner, or most summers we try and go to one of our houses and have a big barbecue or just catch up.’

Their mums are all close pals too

Due to all being children at the time, the three Brockman kids were chaperoned by their parents onto the set – which also meant they struck up bonds too.

‘Our parents would come up and sit around all day, having a long extended coffee morning with the other mums,’ Tyger shared. ‘So great friendships have been born amongst our parents as well, which is another thing maybe people don’t consider.

‘But my mum, Ramona’s Mum, and Dan’s mum are really great friends as well. It’s a fantastic relationship we have. Life might get busy, and there might be times when we don’t see each other for a little bit, but we’ll always be brothers and sisters at heart.’ Cute!

Pretty much all the early dialogue was improvised

It’s been spoken about a lot over the years how the show heavily improvised its dialogue, with Tyger and Daniel both giving some more insight as to how that worked.

Dan explained: ‘The script wasn’t really a take-home job, we’d get briefed on the scene and given the lines while they were setting up for the scene. One of the directors would come up and run it through with us and give us the aim of what they were going for with that scene.’

This was done partially to make the process easier for the trio, but also to give the series a more authentic feel for viewers watching at home.

Tyger weighed in: ‘The team’s goal was, they wanted every family to watch and be like, “oh that’s like our family, that’s what our kids do.”

‘Obviously, you do have to have a script, with a beginning, middle and end, but especially for the first few series, we’d never see the script itself. I might have done a bit earlier than the other two, because I was a little bit older, but they didn’t want it to look like we were remembering lines.

‘Across the board, there was a general air of the scene moreso being described to us, and then being the director’s job to as we go through and making sure we’re hitting the relevant plot points and feeding lines in the middle of the scene, rather than us ever learning. We always had a great free rein over that.’

A future special has never been ruled out

Fans got treated to five whole series of Outnumbered, as well as a very well-received Christmas special in 2016.

While it’s been rumoured in the past there could be more to come, it’s never been officially confirmed – but Tyger would never rule out a comeback and would be ‘keen’ to take part if he was asked.

’I can’t say there are any official plans,’ he teased. ‘I don’t believe there are, but if the email came along and everyone was keen to do it, I’d be keen to do it.

‘Whether it would be, just continuing something for the sake of it or whether Outnumbered’s found it’s a good place to stop. I don’t know that’s not my call, but I would be keen, but I don’t think it will be [returning].’

Outnumbered can be streamed in full on BBC iPlayer and Britbox.