In a recent episode of The Repair Shop, Leatherwork Specialist Suzie Fletcher had the task of restoring an old pair of roller skates. BBC viewers saw Julia Emmett from Berkshire bring in some footwear with a moving history and when she returned to the barn to check out Suzie’s work, she was moved to tears.

“What have you brought in for me today?” Suzie asked and Julia replied: “I’ve brought my dad’s roller-skates in.. they’re looking a bit sorry for themselves, I’m afraid.”

“I have never seen roller-skates like this before!” The Repair Shop worker remarked. “How old are they?”

“He used them in the mid ‘30s, but I’m fairly sure, because they were quite poor, that he would have got these second hand,” the guest explained. “So, I think they could well be older than that. They’re looking a bit… well, I don’t want to use the word really, but tatty.” 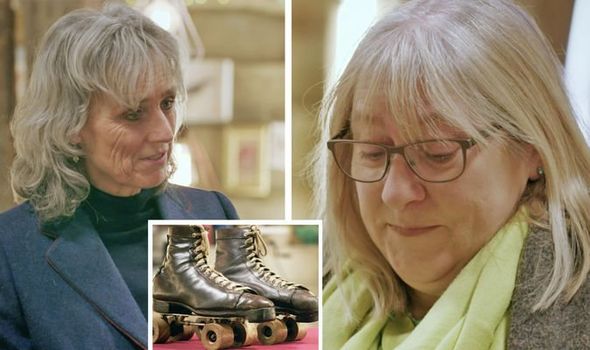 She then went onto explain how her father, named Dennis, got involved in roller-skating.

“He lived around the West Ham area, Forest Gate. Forest Gate had quite a well-known skating rink, it was known as England’s premier skating rink,” viewers were told. “He must have been pretty good, because he had the club kit. And he also won a silver tea set for skating.

“So, my understanding of my dad’s childhood and his youth was that it was actually very tough, not much joy in it at all. He was quite close to his dad and unfortunately, his dad died when he was 14 as a result of a motorcycle crash. And also the toughness of the East End and growing up in that era.

“It’s just these represent one of the few moments of joy that he had, really. He was in the RAF, so stationed up in Blackpool.”

“Did he continue to skate during that time?” Suzie asked and she replied: “Yes, he went along to the local ice rink in Blackpool and that’s where my mum and dad got together. And stared dancing, ice dancing together.

“These really were the reason I’m here; these skates led onto ice skating, led onto him meeting my mum. And without that meeting, my brother and I wouldn’t have been here.” 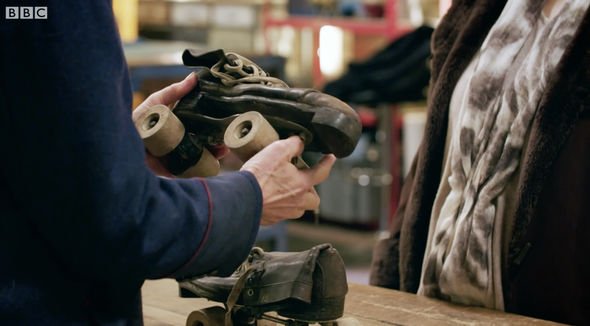 The Repair Shop restorer wondered: “So what exactly is wrong with them? What would you like me to do?”

“The wheels, I think, on both still work,” Julia commented. “But I don’t know if this is wear damage or if it’s just rotting damage.

“But my fear is that they are going to just deteriorate really. If in some way they could be given a future in terms of more years to come and that the story can carry on down the line, that would be lovely.

“In their current condition, they look sad, and I feel sad when I look at them, because I can see time taking its toll on them and I don’t know how much longer they can fight back,” Julia said to the camera.

“With Suzie’s help, I’m hoping they’ll be able to fight back for many years to come.” 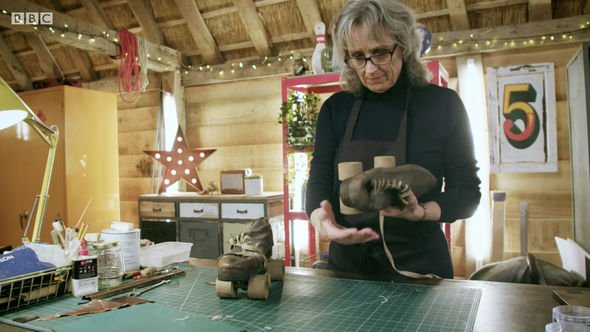 When Suzie took the roller-skates to her workbench, she inspected them first: “You can see, we’ve got some big old holes here and that would’ve been cause by the fact the inside seam that’s joining the two pieces of leather together, had come apart at some point in it’s life.

“And Julia’s father continued using them and it was already weak and so that leather, just the fibres broke down.

“The other thing that I’ve noticed is that the woodworm have been having a field day on the wheels here,” she continued. “Really need to do something about stabilising this wood so it doesn’t end up disintegrating down the road.”

The first thing Suzie set about doing was moving the skates which were mounted on a metal plate.

“I’m hoping it’s straightforward, but I’ve never done this before,” she confessed. 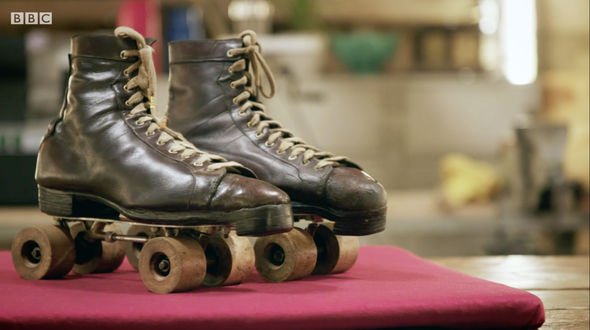 Susie then cleaned the uppers of the boots and metalwork before addressing the woodworm holes in the wheels and those watching at home saw her inject a wood hardener.

The second stage was to fill the holes with melted wax – old beeswax which Suzie had found.

“It trickles down into the holes and plugs up the void that’s been left by the woodworms and then that helps strengthen the wheel,” she revealed.

And it wasn’t long before Julia was back in the barn, reunited with her beloved roller-skates.

“Oh goodness…can I just have a look?” Julia muttered visibly moved to tears. “Amazing, these are amazing.

“As I touch them, I can kind of feel him. I can just imagine my dad racing down to the roller-skating rink in Forest Gate to be with his skating mates.

“There were very few times where I saw him really 100 percent joyful and happy and to have this part of his life back through the skating boots, it’s just wonderful for me,” she told Suzie.

One said: “Cannot be crying over a pair of roller skates… must be the hay fever playing up.”

“Best programme on TV love it but just know it’s going to be emotional,” another remarked.

A third said: “These Boots Were Made For Cryin’ and that’s just what they’ll do.”

The Repair Shop airs Wednesday at 8pm on BBC One.