The Resident Finally Confirms Conrad's New Romance — What's Ahead for Him and [Spoiler] in Season 6?

The Resident has kept viewers in the dark for months about the identity of Conrad’s new romantic partner, so let’s get right to the headline of Tuesday’s premiere: Conrad is officially dating Cade Sullivan, the ER doc with whom sparks began to fly at the end of Season 5.

According to series co-creator Amy Holden Jones, a discussion was held among The Resident‘s writers as to who Conrad should pursue, and “there was a consensus, actually, of who people wanted him to be with,” she reveals. “But it [wasn’t] as obvious about when it should happen and how that should happen.” 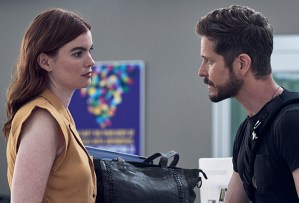 Conrad and Cade’s relationship was revealed in the premiere’s final act, as the pair kissed and made plans to see each other later that evening. Billie, who also began pining for Conrad during Season 5, confessed to Raptor that she’d planned to tell Conrad her true feelings at Kit and Bell’s engagement party, but “Conrad left with Cade before I could get a word out.” For the moment, though, Billie is at least convincingly pretending she’s content to be Conrad’s best friend, while Raptor insisted that “it’s never too late to win the love of your life back.”

“AJ’s theory of why Conrad picked Cade may be right. [Billie] was Nic’s best friend, which is complicated, and it’s true Conrad did not know this wasn’t an impediment to her,” Jones concedes. “Both women are viable choices. And that may continue to be true.” (That said, Jones is adamant that Cade and Billie’s dynamic won’t be defined by their competition for Conrad’s heart. “How two women feel about each other is not only determined by who they date,” she says. “Both of these characters are more complex and deserving than that.”)

There could be a new wrinkle in this love triangle, though: While Jones confirms that Conrad and Billie will “remain incredibly close” throughout Season 6, she adds that upcoming episodes will also come to involve “the nature of the dynamic between Billie, Raptor and another doctor you have yet to meet.”

“You have to watch to see this complex chess game of relationships unfold,” Jones continues. “But first, we have to see the ramifications of Conrad’s choice. Episode 2 is crucial to understanding the chemistry between Conrad and Cade.”

How do you feel about Conrad’s choice, Resident fans? Grade the Season 6 premiere in our poll below, then hit the comments to elaborate on your vote.