The Rookie Meets The FBI Trainee: Grade Part 1 of the ABC Spinoff Pilot

ABC’s The Rookie this Sunday aired Part 1 of a backdoor spinoff pilot, about Simone Clark aka the oldest FBI trainee (played by Claws‘ Niecy Nash). What’s your knee-jerk reaction to this potential offshoot?

Part 1 of the planted spinoff pilot, titled “Simone,” opened with Nolan and Chen investigating suspicious activity at a power station in Griffith Park. Surveying the premises, Nolan spotted a bomb, and they both darted outside just as the device went boom.  In the aftermath, the FBI arrived on the scene  — in the form of Agent Matthew Garza (played by Ozark‘s Felix Solis) and Agent Casey Fox (‘Til Death‘s Kat Foster) — but agreed with Sergeant Gray to share the case.

Though a couple had spotted a white male with dark hair, a Russian accent and a facial scar outside the power station, a second lead comes via prints found on the bomb casing, leading to Ezekiel Freemont (a young Black man). When it is (randomly) realized that an FBI trainee used to be Zeke’s high school guidance counselor, Garza asks for this Simone Clark to be flown out from Quantico. 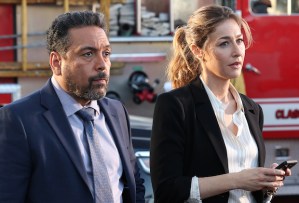 Simone is making a Quantico trainer hurl with her aggressive but perfect driving skills when a chopper arrives to fetch her. Arriving in L.A., she conspicuously enters an all-hands FBI/LAPD meeting, where she simply cannot hold her tongue when the experienced profiler describes an “angry” Zeke Fremont entirely unfamiliar to the lad she knew. Invited by Garza to say her peace, she remembers Zeke as a victim of a violent home, who had sensory overload issues and in fact was quite empathetic. Trainee Clark suggests that Zeke is probably holed up somewhere dark and quiet right now, but her POV is dismissed by Garza, who insists that the kid she once knew no longer exists but is now part of a terrorist cell.

As the meeting convenes, Clark offers her further help to Garza, but he politely declines and tells her to return to Quantico (via coach, not “private jet”). She runs into Nolan afterward, and he offers her his appreciation for her insight as well as the opportunity to ride out the rest of his shift with him, and look for Zeke. Along the way, they compare notes on their respective statuses as “oldest rookie/trainee” — her training got postponed some 18 years by her pregnancy with twins — and John assures her that what they may lack in an ability to run without getting winded, they make up for in life experience.

Nolan and Clark find Zeke, as expected, in the tunnel closest to his apartment. They bring him into the cop shop, where Agent Foster laughs at the suggestion that the trainee, regardless of her connection to the POI, be allowed to lead the interrogation. Instead, Garza nudges her back to Quantico. Again.

Moments later, though, the feds holler for Clark, since Zeke will only talk to her. She and Zeke then reconnect in the interrogation room, where he eventually explains that, strapped for cash, he had started selling his engineering skills on the dark web. There, he met a “research scientist” who asked him to build a total of six (!) bomb detonators, five of which are GPS-activated. 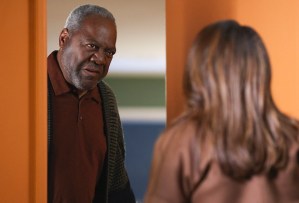 Afterward, Simone tells John that she wants to get Zeke proper legal guidance, and we see her reach out to her estranged father, Christopher “Cutty” Clark (Banshee’s Frankie Faison).  Having been falsely imprisoned in the past, Cutty has a big bone to pick with his daughter, seeing as he’s all about “Defund the Police” and she chose a career in law enforcement.

Nolan meanwhile suggests to Grey & Co. that the seemingly random bombing of the lone power station was designed to shut down (and thus make vulnerable) something on that power grid — say, the National Guard Armory?? And sure enough, we see the scarred man pull up to the armory’s front gate, where we learn that he has the husband of the guard on duty held captive. He is thus allowed inside, per their agreement….

Shortly after, firefighter/National Guard reservist/capoeira instructor Bailey leads a team into the armory, where they find several guards KO’d, and see the suspect fleeing in their Humvee. A car chase ensues, during which Chen at Bradford’s urging carefully uses a maneuver to crash the Humvee — only they then realize the driver was the blackmailed security guard. While the actual terrorist quietly slipped away with a lot of C4 explosives.

All the while this hour, Lopez and Harper were working a seemingly unrelated (though you had to suspect otherwise) case involving a home invasion, where the somewhat addled victim claimed that an alien (as in E.T.) had broken in to steal his research on L.A. traffic patterns. But when Harper runs prints found at the scene, they came back as classified, originating with the Air Force base at “Area 51.” They bring their victim in for further questioning, and FBI trainee Clark overhears them. Simon pulls Angela and Nyla aside to note the man is having a clinical delusion, and neither of their approaches will get through to him. With their blessing, Clark sets out to “charm and disarm” the man, and he eventually shares that the “shapeshifter” took on the form of… a white man in his 30s, with a facial scar.

Having played a key role in putting the pieces together, Clark is accepted by Garza onto the task force, and they head out to the suspect’s last known. There, they find the guard’s dead husband, but no one else — just the wall where he had his attack plan taped up. Chen does a rubbing to find the name “ENERVO,” and that leads Bradford, Nolan and Foster to surmise that their suspect sees his plan as a “war” of sorts. And a typical first strike in war is to take out the roads, ergo his theft of that one guy’s L.A. traffic research.

We then see the scarred man privately survey several barrels of explosive in the back of a rental truck, before introducing himself as “Professor Meadows” to five volunteers, to whom he gives a first payment and strict instructions about where they are to drive other rented trucks….